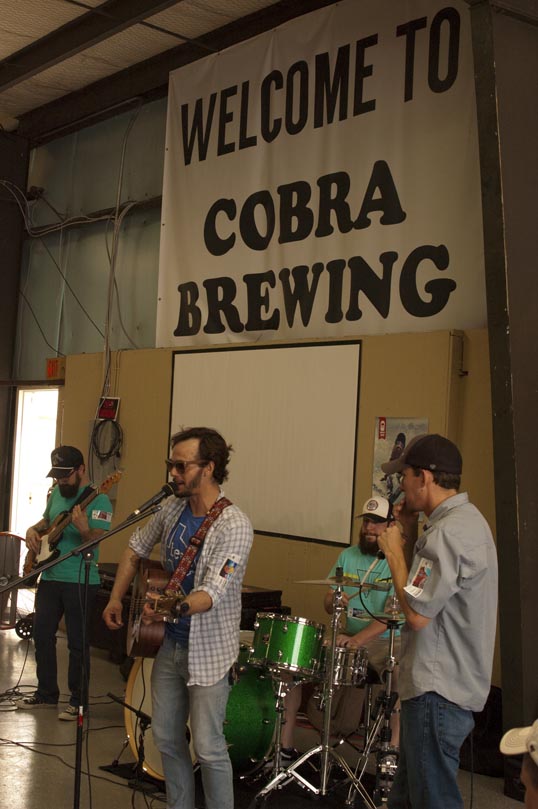 Rhythm and Beards playing at the Cobra Brewing Company in Lewisville, Texas.

I often say (boast?) that with a bicycle and a transit pass I can get anywhere in the Metroplex. I think I have proven that (at least to myself) it is possible… but I never said it was always easy.

Jeffrey Sailer, a friend of mine that runs Bike Friendly Carrollton invited me to the Saturday event at the Cobra Brewing Company, a relatively new brewery in Lewisville. It looked like a great time – craft beer, three bands, beard contests, food (the party was also the first anniversary of Juniors Lone Star Barbecue Sauce) and lots more.

We were to meet at the Dowtown Carrollton DART station at 10:15, in order to get to the brewery by noon. Since I can always count on the Gods of Transit to be against me (every time I arrive at a train station, the train is pulling out, every traffic light I hit on my bike takes forever to change) I had to leave home two hours before that.

I packed up my Xootr Swift – carrying some extra weight (bottles of iced water) to verify that my homemade panniers are up to snuff – and rode down to the Arapaho train station. I bought the slightly more expensive regional day pass – until now I didn’t realize that it covered the A Train to Denton as well as the TRE to Fort Worth. I caught the Red Line downtown and then waited for the Green Line which took me out to Carrollton.

We met there and road a short trip to the Trinity Mills Station where we caught the A Train. One of these days I need to do this ride and take the train all the way to Denton (a fun city to visit and ride around in) but today we only rode it one stop to the Hebron Station then went the rest of the way on our bikes.

It seem silly to buy a train ticket for only one stop – but this is all new construction, fast stroads, and empty space filled with wetlands and there is no way to ride through there. Someday there will be bike trails, lanes, or more friendly roads, but now it is in the hands of the car-exlusive mindset of developers and suburban governments and they can’t see beyond the dark-tinted windshields of their Tahoes.

We climbed off the train at the Hebron station (the Old Town station is closer, but we wanted to get a couple of extra miles in) and rode up to the Brewery. Our timing was good, it was opening right when we arrived.

The event was a blast – one of the best Brewery Events I’ve been to. Good beer – loved their Best Mistake Stout (but I am a stout fan, after all) and their Junior’s Snake Bite JPA (a smoked jalapeño IPA) was really good. The jalapeño aroma was amazing and the heat was balanced just right. 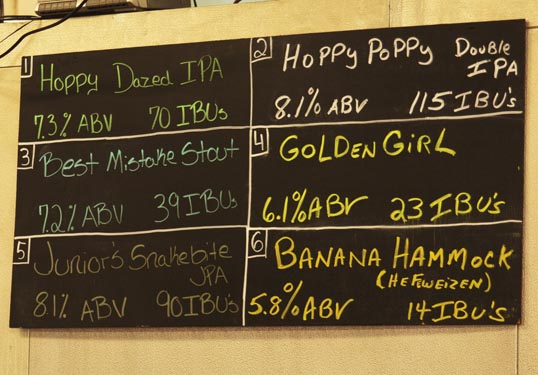 There was a lot going on – music, classic Triumph sports cars, plenty of facial hair for the beard-growing contest, two guys doing vintage tintype photography, and vendors of everything from food to growlers to mustache wax.

It was also the one year anniversary for Juniors Lone Star Barbecue Sauce – there was a lot of praise for their products. They arrange their array of sauces by heat – most folks settled in at the jalapeño level, but I, of course, want to try the hotter habanero variety.

One nice thing about these brewery events is the wide variety of folks that show up. Young and old, rich and poor, bearded and hairless – everybody is there and everybody is friendly. This one was especially diverse and I’ll be back sometime… even if it takes me three trains and about a dozen miles of bike riding to get there.

The festivities went on until six, but I left a bit early – around four. That was eight hours after I had left my house and I was getting a bit tired and dehydrated. I rode to the nearest train station and drank the water I had packed – which made me feel a lot better. I thought about riding back, but my train pulled in and I decided to call it a day. Always better to leave too early than too late.