One of my favorite events of the Holiday Season is the Cedars Open Studios Tour. The Cedars is a neighborhood of Dallas south of downtown and is an up-and-coming area. It still has some relatively low cost space and a lot of artists use the neighborhood as studio space (we’ll see how long this lasts – gentrification is a bitch).

In November, the studios open up on one evening for the Cedars Open Studios Tour – Facebook Link. It’s a fun event and a great way to get some unique Christmas Presents. I always do the tour with some friends on a bicycle, but I guess it would be OK to drive a vehicle, park, and walk. Look for it next year.

The final stop is always Bowman Art Glass (a way-cool place). They have a tree-shaped armature out front. After sunset, they do a skit or two, then, in the dark, the workers bring ladles of hot glass out from the ovens inside and pour the molten liquid over the armature. This makes a glass Christmas Tree.

There is always some wood and paper in the armature so the hot glass starts fires.

The only problem is that is is almost impossible to take good photos – the darkness and the contrast of the bright hot glass, plus the large crowd gathered around. But it is a blast and fun to watch. Next year… bet there or be square. 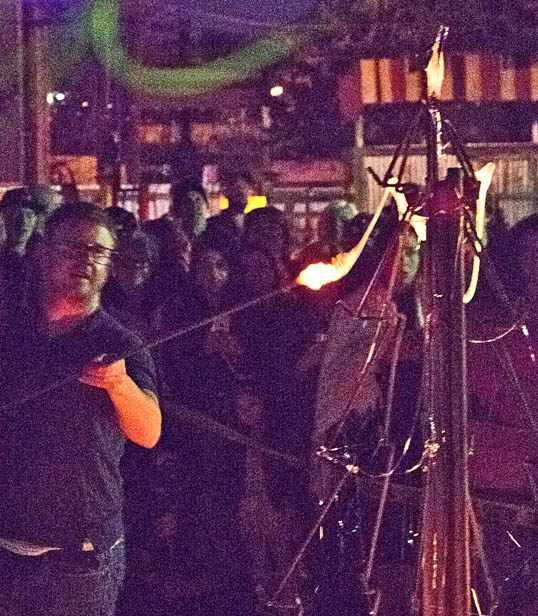 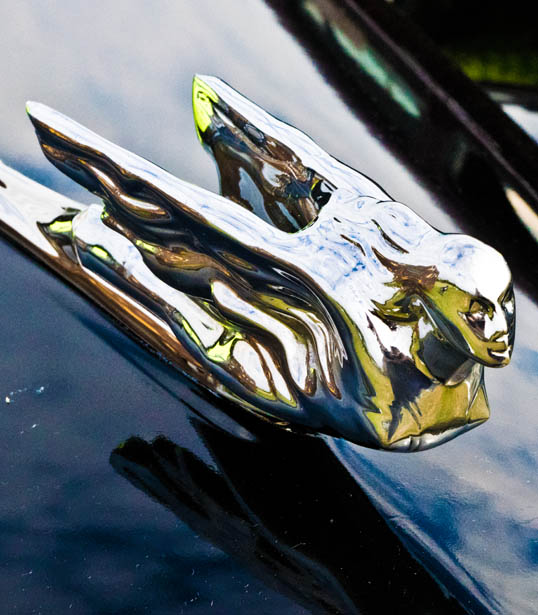 From the Pistons and Paint Car Show in Denton, Texas 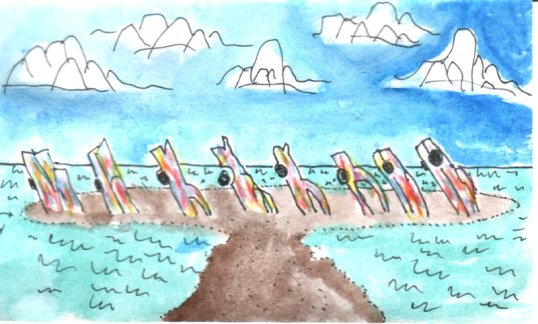 A crude little sketch I did in watercolor pencil at the Cadillac Ranch west of Amarillo. 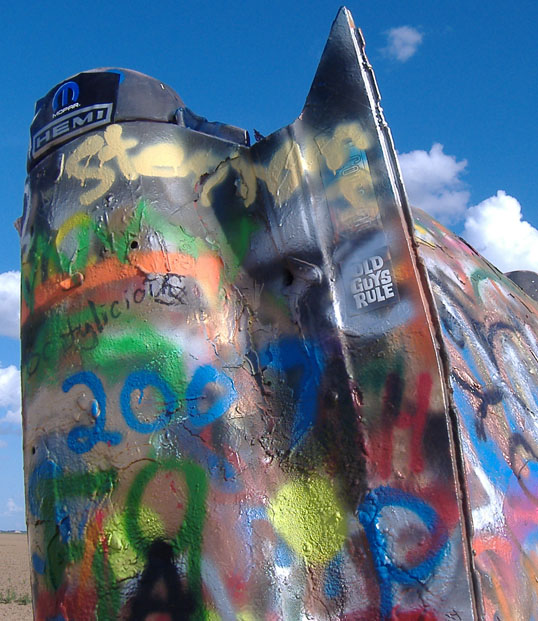 A while back I went on a photowalk with some other folks in Deep Ellum. It was sponsored by a national organization and there was a contest. I wasn’t really interested in entering and didn’t think about it – I was there for the fun.

As we walked around I stepped into Serious Pizza. There was a woman from the Photowalk already standing there, looking at the guy spinning pizza dough. I stood shoulder to shoulder to her as she raised her camera and clicked. About a minute later, I took the above shot.

I’m notoriously slow at processing my photographs and the other woman had hers up first. It was amazing how similar our photos came out, even though they were taken a minute apart (I think it was different dough, for example). She entered hers in the contest, and won first place nationally.

Which is cool with me, she did take her photo first and had it posted first. It is a nice shot – especially with the guy’s tattoo.

I love Deep Ellum, always have. I’ve been living in Dallas long enough now to see the area go up and down several times. I did a search on my laptop for the term “Deep Ellum” and found some entries from my old journal from back in the day.

This one is from an entry called “Monkeys in Space.” I wrote it in 2000, sixteen years ago. It refers to an event that happened fifteen years before that – in the mid eighties – thirty years of Deep Ellum.

The mid-eightes in Dallas were a time of alternative music and gritty nightclubs popping up in the nascent Deep Ellum district. Most of my life, I’ve felt out of step with the times, sometimes ahead, sometimes behind. For a little while in the mid-eighties, while I was in my late twenties, I guess I could be considered to have been fashionable. The Deep Ellum nightclubs were starting and I was among the first people to hang out in the old Video Bar, the original Club Clearview, Theater Gallery, and the Prophet Bar.

Like all the clubs, the Prophet Bar was a converted old brick industrial space. It had two rooms, a front bar with live music and a back room with a suspect kitchen. It was known for watered down drinks, hot music, and walls covered with wild surrealistic murals painted on commission by local artists.

One evening we were at the Prophet Bar for some live music but had arrived early and were sitting around the front room with a smattering of folks all sipping drinks and eyeing the fashions and the figures. They had a jukebox and I had a fistfull of quarters.

The selections were populated by the alternative hits of the day, Siouxie and the Banshees, Teardrop Explodes… but among these familiar tunes were a few songs that even I hadn’t heard of. Wild sounding bands with ridiculous song titles. The one I remember was a band called Monkeys in Space with a song on the jukebox that I can’t recall except that it was a sexually explicit title.

I said to my friend, “I’ve never heard of that band before. Look at that. I wonder what kind of music that could be?”

Of course I couldn’t resist. Thinking how cool and hip I was to play a song nobody had heard of I plunked down my coins and pushed the proper numbers and letters on the buttons – then walked back to the table with the whole bar looking at me.

The bastards that ran the club had thought up a pretty good joke. In the slot that they had earmarked for Monkeys in Space they actually put a copy of Tie a Yellow Ribbon ‘Round the Old Oak Tree, by Tony Orlando and Dawn. It’s hard to describe the horror of that song… that opening hook, those lyrics booming out in that place with the black clad clientele and colorful murals.

That incident always stuck in my head. Decades later, I was able to use the Tony Orlando and Dawn song for my own nefarious purposes.

But that’s a story for another day. 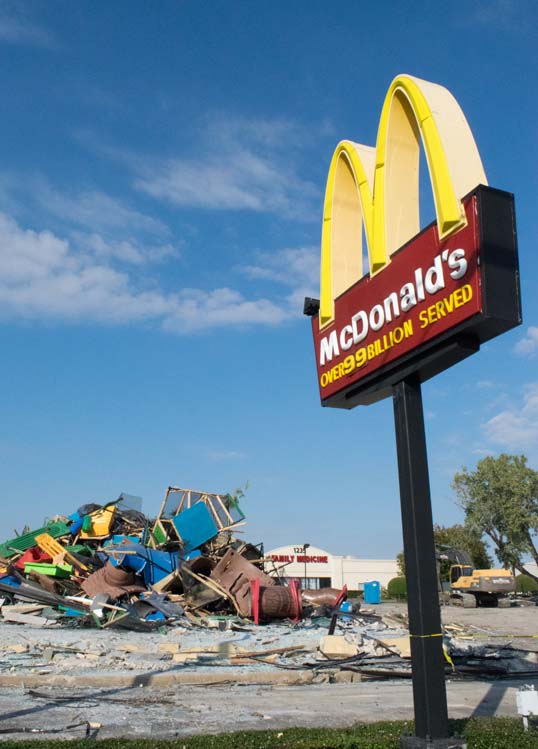 Over 99 Billion Served – but no more.

There is a joke in Dallas… it goes like this, “Whenever you ask someone for directions, they always start ‘Get on Beltline…’.” And it’s true.

I live a handful of short blocks north of Beltline, so I know that endless loop well. Less than a mile to the West, on Beltline, of course, was a McDonald’s. I have been in that place exactly once, when we first moved in, before our internet and water was hooked up. I went in there for coffee and wifi.

Now when my kids were little, we went to McDonald’s (and various other fast-food emporiums) all the time. Not for the food, per se, but for the ball pits and climbing tunnels. My kids were connoisseurs of fast-food ball pits. They would sit around at home discussing the comparative merits of all the local McDonald’s vs. Burger King. They would arrive at a decision and off we would go. When driving long distances they would spot a unique climbing structure out the speeding windows and we would have to stop. Candy would walk to another place, any place, and get food – she could not stand McDonald’s… no matter how fun the ball pit was.

But the kids had outgrown all that before we moved here. Shame, because that McDonald’s had a really nice climbing structure in a huge glass enclosure out front. (Google Maps Streetview from before the demolition). At any rate, I had no reason to go there and had only been there that once.

Still, though, I drove or biked past it at least twice a day for years and years and it had blended into the daily background of my life.

Then, one day, coming home from work, it was gone. There was nothing there except a pile of rubble. 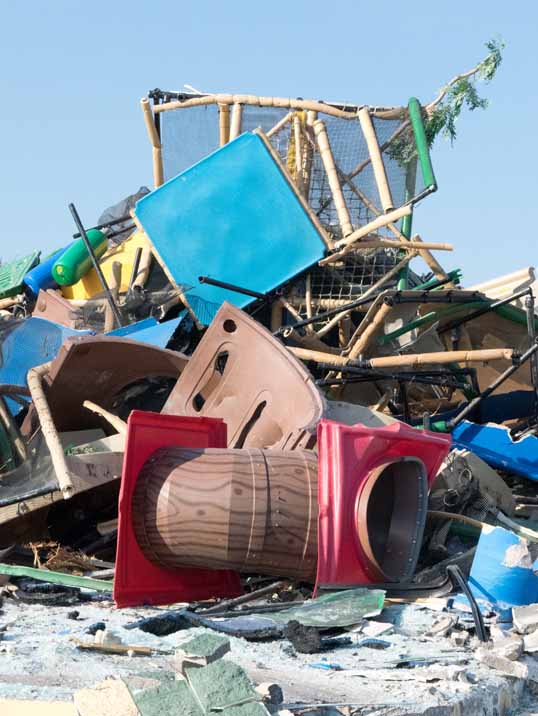 It was a shock. There were the plastic tunnels all bulldozed and torn asunder. It was like finding a body in the yard – like someone you knew slightly had died. Of course, the neighborhood email list went into a frenzy of indignation and fear – nobody knew what had happened.

Of course, this is Dallas (or at least a suburb), and nothing is allowed to rest for long. The rubble was gone in a couple days and already, concrete is being poured. I assume it will be another McDonald’s – probably bigger and better.

But I bet the food will be the same.

There is another Dallas joke. “There are only two seasons in Dallas, Football and Construction.”

“this was an environment built, not for man, but for man’s absence.”
― J.G. Ballard, High-Rise

Wells Fargo Tower in Fort Worth, Texas. Click on image for a higher resolution image in Flickr.

I have always been fascinated with the view of skyscrapers, looking up, from the sidewalk beneath. They cease to be buildings and are converted into insane abstract constructions.

Love/Hate – what amazing examples of man’s imagination, ambition, and effort – yet they are also the least human of buildings. From the street they are nothing but glass walls with tiny openings guarded by armed guards. Man is not welcomed into his own creations.

(title paraphrased from High-Rise, by J. G. Ballard. I wrote about it here).