What Are the Least Outdoorsy Cities in America?

Dallas is the sprawling place of ten-gallon hats and gleaming ten-miles per gallon SUVs. It’s the oil industry’s heart and soul (if it has a heart or soul), where only half of the residents are within walking distance of the tiny smattering of parks within its borders. Not that people walk in Dallas—or take advantage of the paltry public transportation system, or even bike on the scant number of bike lanes. The only way to get from point A to point B is generally to drive, and given the oversized amount of space, the route is hardly ever a short one. As for the park lands that do exist, one—the Mountain Creek Lake reservoir—is prohibited by the state health department from letting you from eat the bass or catfish caught there, because of PCB contamination.

I’m not saying that Dallas is Portland… but the paragraph above is largely a result of a stereotype rather than recent research. True, Dallas is massive – and the summers are toxic.

However, there are a few things that should be pointed out.

paltry public transportation system – DART has a lot of work to do, but it is the largest (85 miles) operator of light rail in the country – I can assure you that with a bike (for that last mile) and a transit pass you can get anywhere in the vast Metroplex with ease.

scant number of bike lanes – Again, a lot of work to do, but here’s the Googlemaps Bike map of my neighborhood (bike lanes/paths in green). The other residential streets are all rideable too. 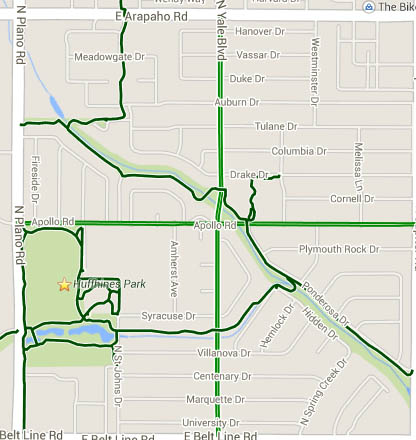 All across the city trails, dedicated lanes, sharrows, bridge conversions are going up.

Tiny smattering of parks within its borders. I don’t know about that… White Rock Lake is as good as it gets. Then there are the more modern versions – Klyde Warren Park is amazing. It’s true Dallas parks are horrifically hot in the summer, but what the hell can you do about that.

The Dallas Park and Recreation Department maintains more than 21,000 park acres including 17 lakes with 4,400 surface acres of water at 17 park sites, 17,196 acres of greenbelt / park land, and 61.60 miles of jogging and bike trails at 24 locations.

(and that’s only Dallas proper – there are the suburbs too, plus Fort Worth is way ahead of its bigger brother).

The Great Trinity Forest is the biggest urban hardwood forest (virgin forest, btw) in the country. Despite a few missteps, it is being brought into an amazing asset for the area.

What my point is – the “outdoorsy” or bike-friendly aspects of an area are highly subjective. If you do the work, you can get outside. The need to drive all the time is in your head, not in your feet.

I think the current controversy over the tear-down (good idea) and Trinity River Tollroad (terrible idea) will be a bellweather event for the future of the city – and have tremendous ramifications beyond the fate of a few acres of concrete. It’s the chance for a paradigm shift for the city.

Some More Local Response to the article. 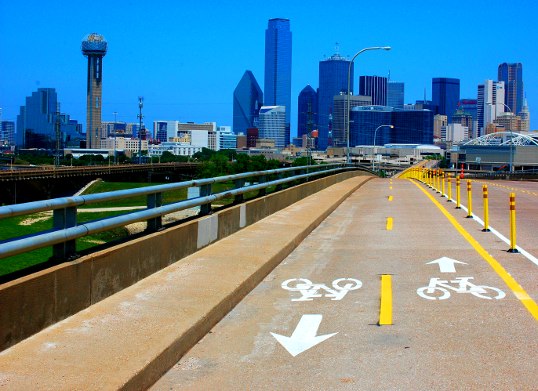 Bicycle Lanes on the Jefferson Viaduct from Oak Cliff into downtown, Dallas.

My Technium on Winfrey Point, White Rock Lake. Dallas, Texas. Look carefully and you can see a guy on a unicycle.
(click to enlarge)

And for an alternative view:

Texas is on Fire! And other Great Texas Happenings

FXX is going to show 24 seasons of The Simpsons in a legendary 12 day marathon.

In the same vein, here’s a guide for watching shows from begining to end.

The Paste Guide to Binge-Watching

In the past, I particularly enjoyed bing-watching The Tudors and Battlestar Galactica. I’m sort of stalled now, but am trying to work through Mad Men and Breaking Bad. I tend to wait until a series ends before even starting to watch – ever since I was burned with Carnivale. I was hooked on the series – but apparantly I was the only one… it was canceled before it finished. Pissed me off.

I meant to put this in last week, but never did.

How the makers of Corona sell so much bad beer

There is a reason so many people stick limes in the necks of the things – it’s to disguise the simultaneous foulness and tastelessness of the swill.

Unfortunately, this isn’t the Big Boy engine that I watched them move out to Frisco last year – one just like it. It is an amazing piece of machinery and history. 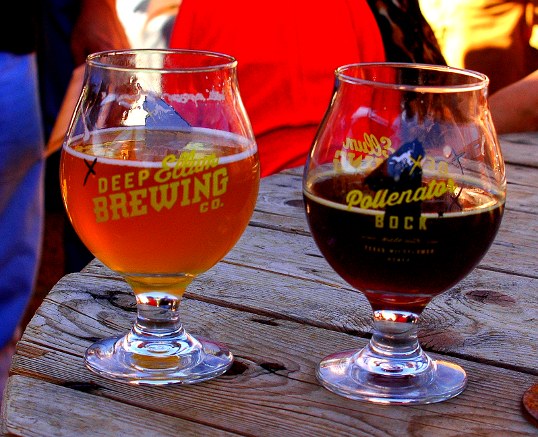 A Pollinator Bock on the right, Dallas Blonde on the left.

The FDA wants to regulate spent grains, and the beer industry is not having it

The Beer Institute points out that “taxes are the single most expensive ingredient in beer, costing more than labor and raw materials combined.” They cite an economic analysis that found “if all the taxes levied on the production, distribution, and retailing of beer are added up, they amount to more than 40% of the retail price” …

The federal government, however, is looking to potentially jack those government-imposed costs up ever further — all for our own good, of course. Last October, the Food and Drug Administration proposed a potential new rule via the Food Safety Modernization Act that would regulate brewers’ spent grains the same way as pet food, requiring that the grains be dried and packaged to ward off contamination before they come into contact with other humans. Seeing as how this would completely mess up the mutually beneficial arrangement between many brewers and ranchers wherein ranchers come and pick up brewers’ spent grains and then productively and inexpensively recycle them as a feed source for their livestock, this rule poses something of a problem.

But the beer industry is arguing that they have no idea what exactly these foodborne illnesses are supposed to be, since the grains are already declared fit for human consumption before they start the brewing process and because they have been working with ranchers for decades without problems. A bunch of brewers are currently protesting the proposed rule, arguing that the equipment and processes they would need to install would make the whole thing too expensive, and that they’ll just end up trashing their spent grains into landfills — while ranchers are worried that they’ll lose a valuable source of feed…

The teardown of I-345 represents the most immediate and large-scale opportunity to reverse a pattern of growth that has led to the dilution of Dallas’ urban form. The very fact that detractors characterize urban life as a kind of designer lifestyle, a playground for the young and well-to-do, is either a reflection of an ignorance of what it is like to actually live in a city or a caged animosity for forms of living that look anything unlike the homogenized stratification of life in super-sprawl suburbia whose highest civic value is individualistic autonomy (“What if it were your daughter?” Jones threatens). But what is at stake is more than a real estate gambit. The teardown is an opportunity to begin to reverse 60 years of failed planning and begin to move towards building a future city in North Texas that achieves the economic efficiencies and social edification that are absolutely necessary to sustain the region’s viability.

There is more to life than increasing its speed.

Maybe there is, maybe there isn’t. At least there is the fact that once you increase its speed past a certain point, all is a blur. There is a comforting mystery in a blur. Like a hummingbird’s wing – you can forget the delicacy and fragility… seduced and confused by the motion.

An object in motion tends to move out of the frame. Unless you manage to move the frame. Maybe the world deserves to be smeared across the concrete. It is softened but also obscured. Detail disappear; unseen patterns emerge. Is the truth better seen unfocused?

But who wants a clouded truth?