Bicycle lights can be pretty expensive, at least for the good ones. But battery powered lights aren’t what I remember from my childhood – where you had a big D-Cell light that would work for an hour or so and then go yellow and dim. The LED has revolutionized flashlights and, by extension, bike lights.

I have a couple handlebar-mounted lights – decent ones, if not top of the line. I usually set them to blink – they are lights that are designed for me to be seen, not for me to see with. On an urban road at night, that’s the most important thing. The streetlights are bright enough for a cyclist to see where he is going – but you want the cars to know you are there. Bright blinking is the best for that… plus batteries last forever.

But riding on trails at night is a different story. I needed something so that I can see – a steady white light facing forward. For example, one night coming home from Critical Mass along the White Rock Creek Trail (actually, it was the Cottonwood Trail, the wooded section just south of the Forest Lane DART station – my destination) at a little after midnight I came upon a group of homeless people sleeping on the trail. Luckily, I saw them with my light. Hitting someone sleeping on the bike trail would not be good for anyone.

Again – the dedicated bike lights cost a pretty penny – but small LED flashlights are powerful and very cheap. They sell them by the containerloads – they take three AAAs – most are adjustable. Very useful lights.

The problem is how to mount them on a bike. I actually want to mount them as low as possible. It would seem that a helmet mount would be the best – but if they are at close to eye level they don’t cast visible shadows. It’s the shadows that help you see objects in the path ahead. A low mounted flashlight will throw long shadows – easy to see.

I tried a number of solutions – velcro straps worked pretty well – but nothing was both strong, reliable, and still removable.

Until I discovered the world of Picatinny (and Weaver) rails. These is a whole host of accessories designed to mount on pistols, rifles, shotguns, or paintball guns. Laser sights, scopes, cameras… and, especially tactical flashlights. This seemed like a perfect thing to mount on a bike.

It didn’t take much searching until I found this Weaver/Picatinny rail mount with flashlight holder on Amazon – shipped from China for less than five dollars. I ordered a couple of them (for spares and different bikes) and after a patient wait, the package arrived from halfway around the world.

Now that I am outfitting my new Xootr Swift for city riding and commuting I decided to add a small front rack. I’ve found these to be indispensable for urban riding. For bike riding in the city, it’s not always about cargo capacity, it’s about organization and a front rack helps me keep organized.

I bought the cheap rack, and then mounted the rail on the bottom of the rack. Here’s how. 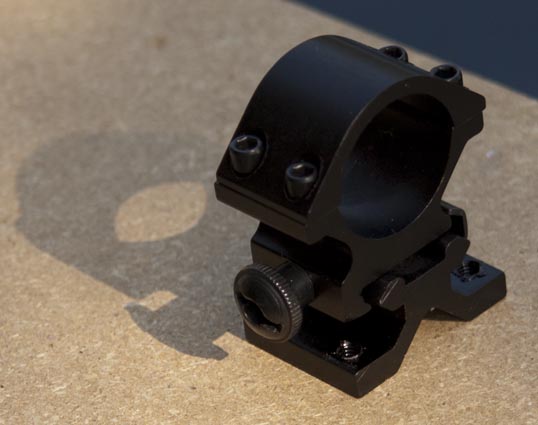 The Picatinny/Weaver rail flashlight mount as it arrived. 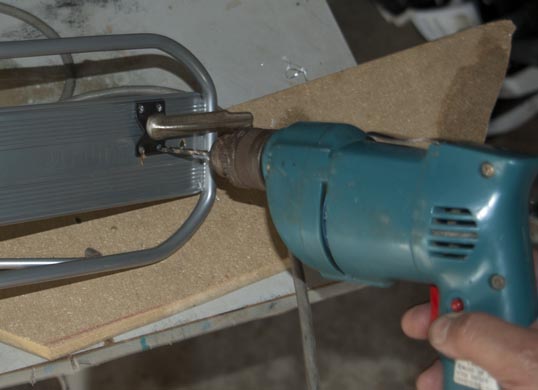 Four mounting holes go into the small front rack. Do this with some care – or the flashlight won’t shine straight ahead. 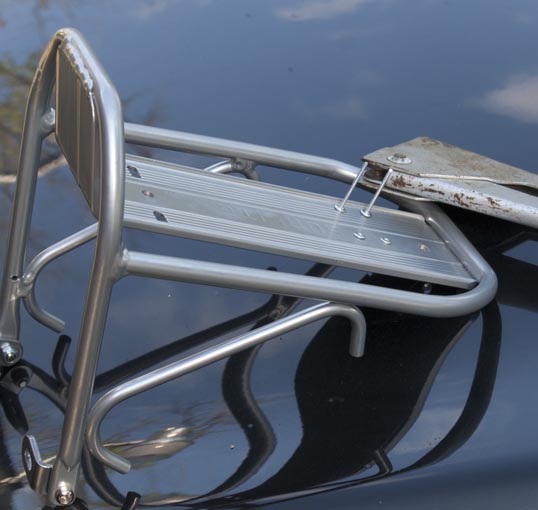 I could have mounted the rail with the bolts that come with the assembly, but I decided to use aluminum pop rivets for weight, strength, and neatness. 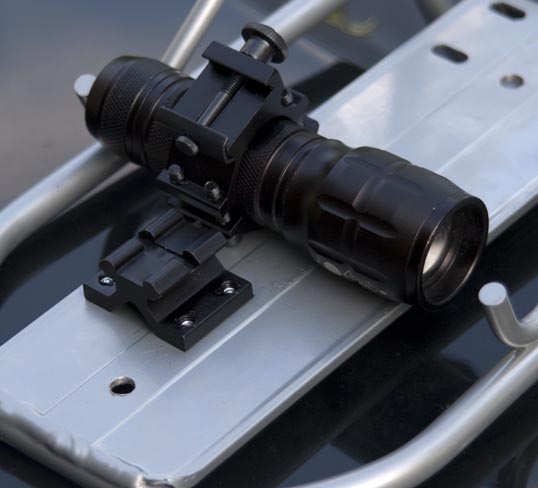 The rail mounted on the rack and the flashlight in the holder. My flashlight was a little too big, so I simply used the longer bolts that come with the unit – the ones that are intended to go around a barrel. 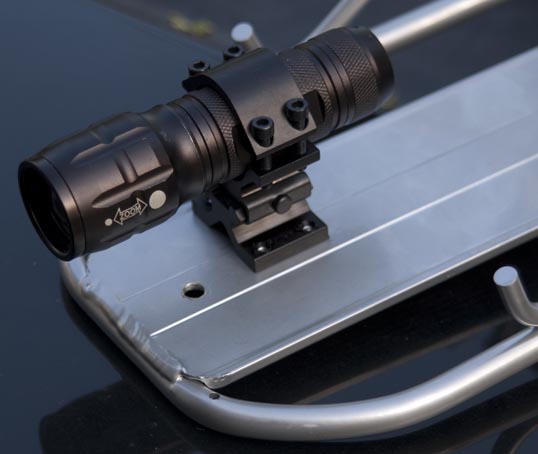 This is how it mounts on the rack. Strong and neat.

The rack and flashlight on the bike, along with a small pump (maybe I’ll post how I hold that to the rack) and a little plastic box from Office Depot, held on with nylon bolts and wingnuts in holes drilled through the box and rack. It looks sort of stupid, but is very useful to hold my wallet, phone, keys, lock… that sort of stuff.

Take some care in mounting the rack so that it is level. If the rack points up or down very much, you would have to shim the holder to get the light horizontal.

The flashlight is held on securely, yet it comes off easily for battery replacement. I ordered an extra set so I even have a spare flashlight to stick in if needed.