Bike rider on the DART train.

This is a welcome upgrade. It is surprising how many bicycles you see on the DART trains now.

What’s frustrating is the number of able bodied people without bikes, luggage, or grocery carts, that you find sitting in the fold-down seats in the handicap or bicycle spots on the trains in the present format. They sit there, usually engrossed in their phones, blithley ignoring the growing crowd of people in wheelchairs, holding bags, or doing the “DART Dance” with their bicycle (The DART Dance is moving back and forth, standing in the open area of the train, as each stop opens on the left or right). The only way to fix that is to remove the seats.

Right now, the way things are going – I can relate to this person….

Yeah, it’s like a radical dedication to uselessness.
Totally. I don’t give a shit whether what I do is practical or not; I just don’t want to perpetuate society’s shitty capitalism forever. If you see everything needs a use or an instrumental value as like part of a capitalistic worldview, then the World Speed Project is anti-that.

We Didn’t Believe In ‘Artisanal’ Toast, Until We Made Our Own

What the world needs now – a three dollar and fifty cent piece of toast.

Dallas is a canvas for change 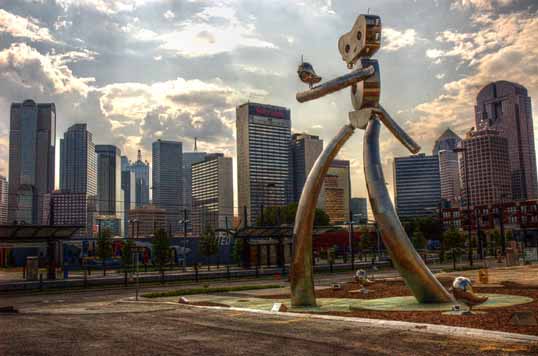 On a recent business trip to Dallas, I was shocked by how much concrete and how few people I saw. My first impression was that Dallas is a city stuck in an outmoded way of thinking about transportation. It was like my plane was a time machine that had taken me back to 1970, when everyone still thought that the way to fix congested highways was to build more and wider highways. Coming into town, I saw more concrete going down, from the DFW Connector Highway Construction Project north of the airport to the massive LBJ Express Project. I learned that about $15 billion is currently being spent on highways in North Texas, more than in any other region of the country. All the construction seemed bizarre because the area already seemed to have an unhealthy abundance of highways. This is not bragging material for the city; this should be embarrassing. Given what has been learned about highways in cities over the last 40 years, priorities could have been better placed elsewhere.

You already know what #1 is, of course. Still, there are 49 more to discover – it could ruin your life if you wanted to let it.

I have actually done this one. If you visit Carlsbad – be sure and sign up for the Slaughter Canyon Tour. You get to hike a very long half mile through some steep and intimidating scenery. A ranger then unlocks an iron gate and takes you on a tour of an undeveloped cave. There are no lights (a spare flashlight is required), no paths (you use ropes to get over a tough patch), no sound effects… only an enormous ancient beautiful cave.

They have been giving tours of the Slaughter Canyon Cave for decades, but you will feel like you are the first person to walk in there.

Cross-Post: A Reaction to DMN Editorial on 345

I-345 near downtown Dallas

How to Build Another Uptown

This battle is not just about I-345. It is about a strategy. It is about duplicating as many times as we can the one success urban Dallas has—Uptown. It is about a city devoted more to residents than to commuters. Tearing down the aged hulk of I-345 is a first, small step. But it could be enough to tell the market that Dallas is finally about to assert itself as a real, honest-to-God city.

SORCERER, The Movie That Got Blown Up By STAR WARS

SORCERER is one of my favorites; one of the most tense and exciting films ever made. It is a shame that it never hit the big time – a victim of (as the article says) Star Wars fever, and an unfortunate mistake in titling (trying to tie in to The Exocist). See it if you get a chance.

Of course it is a remake of a classic French film, THE WAGES OF FEAR. It’s the rare example of the remake being as good as the original. I don’t know which version is better, they are very similar and completely different. THE WAGES OF FEAR is available streaming on Hulu plus.