This last weekend, at the Cobra Brewing Company event, there was a complex apparatus set up in one corner of the brewery. Scott M Hilton of Camera~Absurda was there taking tintype photographs on-site of the contestants in the beard contest.

The process was interesting to everyone – but to me; professional chemist, wannabee photog, enthusiast of the obsolescent, devotee of the unusual, and aficionado of the useless – it was irresistible. What an amazing collection of toxic chemicals, explosive reagents, antiquated equipment, and bright lights.

We were there early enough to be able to talk about the process before the crowd became too thick (though I’m guessing here about the exact chemicals used). They start out with a small aluminum plate and coat it with a collodion (basically gun cotton dissolved in ether – not too safe) solution and silver nitrate. That is exposed with a bright light in a camera.

They were using a powerful electronic strobe. I asked him why he didn’t go whole-hog authentic and use a tray full of flash powder. The reply was, “There are plenty of dangerous chemicals involved already, no need to add more hazard.”

Some magic is done inside a light-proof booth and then the print is developed in an acid solution. That’s the most amazing part, watching the image appear from a frosty cloud. In the age when this process was current, it would have appeared to be magic. Today, it’s still pretty damn amazing. The image is fixed (probably in a cyanide solution of some kind) coated and done.

The image is a prime positive on a metal plate – the image is therefore reversed. The tonality of the print is amazing. There is something about the contrast, tint, the detail, and the lack of grain that gives it an aura of primordial beauty. The portraits have that ancient dignity that you always see in historical photographs. I always assumed that people have changed – but it seems that is is only their snapshots.

There is no dignity in digital.

Here are the photos they took at the Cobra Brewing Event.

A guy standing next to me happened to work at Texas Instruments (on the same campus where I work for… somebody else) and we discussed the similarity of what the photographers were doing and modern semiconductor manufacturing. We speculated what we could do with metal plates and some sophisticated photoetch solutions.

One interesting thing was that the photographers were having the beard contestants sign a model release so that they could use their images in their projects. Instead of ink on paper they were signing an electronic release by swiping across an iPhone screen. If someone wanted to buy a print – they used a Square to swipe a credit card. Here you were using the most modern of wireless portable e-commerce machinery to facilitate the work of taking tintype photographs with technology out-of-date a hundred years ago.

The contrast was palpable. 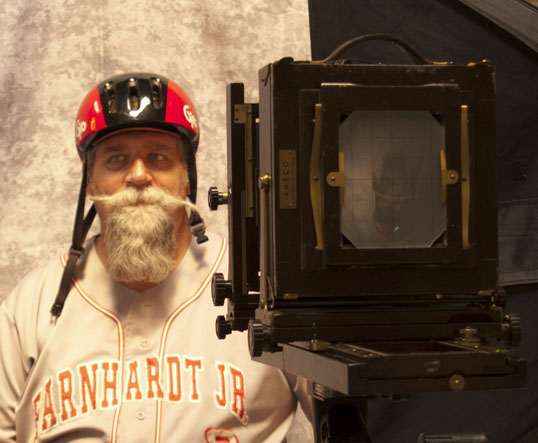 The camera is focused with the ground glass 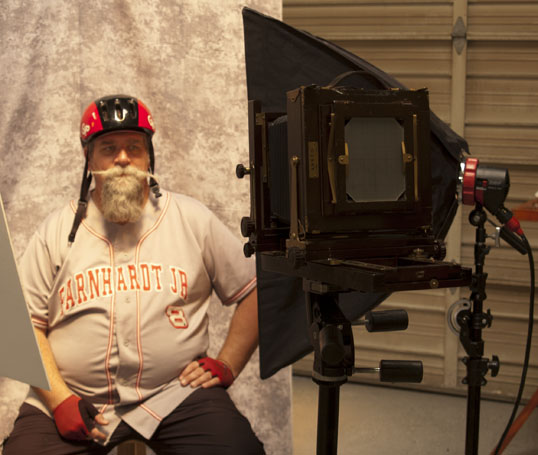 A big electronic flash is used for the exposure. 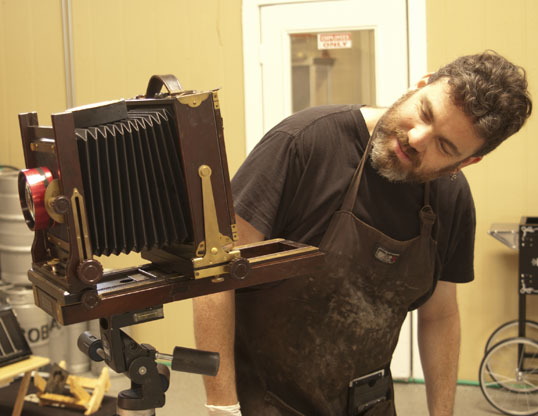 Adjusting everything takes a lot of work.

Some sort of photographic chemical wizardry – kept from mortal eyes.

The plate goes into the acid bath. 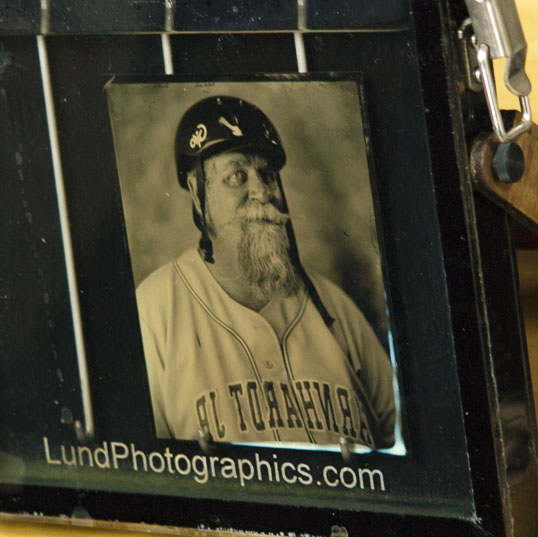 And the final image emerges. Notice that it is reversed.