I haven’t been to the Dallas Arboretum in decades. I used to go the the DeGolyer Estate for concerts back in the day, but once it became the Arboretum I’ve only been once. It was close to when it opened and I was disappointed because the plants hadn’t grown out yet. I took Nick there as a toddler because they were giving away free trees. I picked up a little live oak in a coffee can and planted it in back of our house in Mesquite. Everyone gave me a hard time because it was only an inch high (it looked bigger when it was still in its can). Over the decades, though, the thing grew – it’s now a huge beautiful tree.

The problem always was that the Arboretum admission is so expensive. I always felt it was more a private playground for the wealthy members of the Dallas Garden Club than an asset for the city. That was a silly opinion, I know, and I wanted to go visit, but never was able to get around to it.

I have always been a fan of Dale Chihuly, but I hadn’t seen very much of his work, other than some glass flowers at the Dallas Museum of Art. When I read about his exhibition at the Dallas Arboretum I was excited.

Our writing group has branched out into photography. We decided to go down there as a group and take pictures together. Everyone liked that, and one member had a set of tickets in a goody bag from a recent purchase. We picked a day and met down there at the opening, cameras in hand. I had a pack with extra lenses and a tripod and was self-conscious about lugging all that stuff. I shouldn’t have worried, most of the people going in were carrying tons of gear – either photographic or picnic stuff.

For a day I set aside my goal of taking pictures of people and gave myself permission to do “postcard shots.”

There were thick crowds of photographers wandering around. As is typical of Dallas, everyone seemed to be a gearhead. Near the entrance I stood next to a couple – he had a big, manly, camera with a long lens. We were looking at a giant yellow glass tree raised up into the sky.

“It would be cool to come out at night with a tripod and shoot that with a long exposure,” I said, just to make conversation.

“Well, I’ll tell you,” the guy with the big camera said, with a superior air, “I can hand shoot under any circumstances, I just shoot at 3200 ISO.” He waved his expensive hunk of optical glass and circuitry in my face.

“Oh, you are such a show off,” his wife said, the pride evident in her voice. The two of them walked off into a bit of woods. I had to chuckle – gearheads are so funny. I’m happy you can buy all that stuff… but you’ve still got the same old eyes and brain – and that’s what you really take pictures with.

But that little exchange really brought the challenge I faced into focus… so to speak. With hundreds of photographers in the Arboretum snapping hundreds of photographs each all the time from now until the exhibit closes in November…. How can anyone take a picture that is in any way unique? I don’t want to have the same picture as everybody else.

Four of us from our writing group spent about four hours walking around taking pictures. That’s a surprising amount of work, and a lot of walking. It will be interesting to see how we see the same thing in different ways. Peggy already has some of her fantastic photos up – go take a look – plus some more here.

Now I have about a hundred images and a lot of work getting these edited and in a form where they are usable. I’m not sure what I’ll do with all of them – I’ll use my Flickr account to store some. I should be able to get at least a half-dozen blog entries out of it… which is always a good thing.

Oh, the Chihuly Exhibition at the Arboretum is absolutely stunning, by the way. There are many varied groups of glass pieces in all kids of settings. He has done an amazing job of blending the glass with the living plants. His works range from small works interspersed in beds of plants to giant trees, maybe thirty feet high, made completely of glass. Walking through the gardens is an unforgettable experience – as you enter each new area you can’t help but gasp at the unexpected beauty that is waiting there.

I enjoyed taking all these photographs, especially since I wasn’t alone. I’d like to go back without a camera and simply look at the place. I’d like to go down with a sketch pad and some colored pencils. I would love to go back and try to take pictures of real people there among the sculptures, greenery, and beautiful settings.

Still, photographs do not to the thing justice. If you live in the Metroplex, you need to make plans to go down to the Arboretum and see this exhibit. If you don’t live here… I think it’s worth a trip by itself.

We’re really broke right now, but I want to find some way to scrape up the money to buy a membership to the Arboretum. I would love to be able to go down there and simply find a place to sit, look around, and maybe sketch a little bit. Beautiful things are so rare and fleeting in this world and to be able to go to a place like that and… well, simply wallow in the beauty is a wonderful thing. 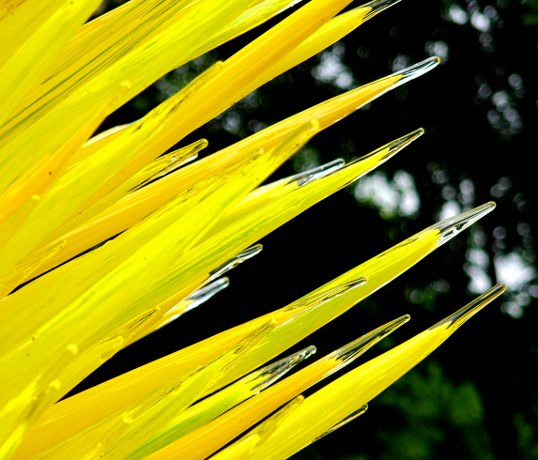 (Click to Enlarge) These boats full of Chihuly glass aren’t really floating on White Rock Lake like it looks. They are on the Arboretum infinity pool – beautiful.

34 responses to “Dale Chihuly at the Dallas Arboretum”