Sometime, somewhere, somehow, while perusing the ‘net on a day when, though I don’t remember the details, I most certainly should have been doing something more worthwhile, I came across some sort of magazine article or web page that was extolling the delicious risk of eating fiddlehead ferns. I’m not sure exactly where it came from, but there’s a lot out there… here’s a quick sample for reference purposes:

It is always tempting to put out a link to the Wikipedia entry on Fiddlehead Ferns. Except… how useless – everyone knows how to look something up on Wikipedia. To me, that reminds me of my childhood, when everyone would start their school essays with the phrase, “Webster defines (insert subject here) as (insert dictionary definition here). How lazy can you get? It was especially common with oral reports. If you had five minutes to kill, you could get a good forty seven seconds out of the way with ol’ Webster. I always wanted to start a report with, “Webster defines cunnilingus as (insert definition here) – which has nothing to do with my report on the petroleum industry in Venezuela. Ooops, I’m getting off-subject here. The Wikipedia Definition of Fiddlehead Fern.

The unwritten ethic among fiddlehead foragers is to take three violin tops. A fern produces five to nine fronds per growing season, so harvesting more than three can jeopardize the plant’s survival. Found Food | Fiddlehead Ferns

The ostrich fern is the safest fern to eat, even though it, too, can contain toxins. The fiddleheads of cinnamon fern (Osmunda cinnamomea), lady fern (Athyrium filix-femina), and bracken fern (Pteridium aquilinum) can also be eaten, but all are at least mildly toxic and can cause nausea, dizziness, and headache, so it’s probably best to avoid them. Fiddlehead facts

When the Spiceman is in, you can buy a fistful of exotic Tokyo longs to dazzle the pants off your in-laws (or maybe just your spouse). Best Fiddlehead Fern Finder: Tom “Spiceman” Spicer of F.M. 1410

After these slight impressions collected somewhere in my useless mess of gray matter I was on to other tasks, probably working on remembering things like where did I leave my car keys and what is my bank account pin number.

My thoughts on fiddlehead ferndom lay dormant somewhere in there until I was walking around the Dallas Arboretum with my writing group taking photographs of the Chihuly exhibition when I overheard a woman talking. She was staring intently at a guide to the exhibit which I had neglected to obtain at the entrance. She was rattling off the names and locations of the colorful glass sculptures and I heard her say, “It says here he did some sculptures called Fiddleheads but I haven’t seen them yet.”

And that set off the memories. The rest of the day I couldn’t help but keep my eye out for some glass fiddlehead ferns. Finally, in the last garden at the end of all things, there were the fiddleheads sticking up amongst the greenery.

Now I can die in peace. 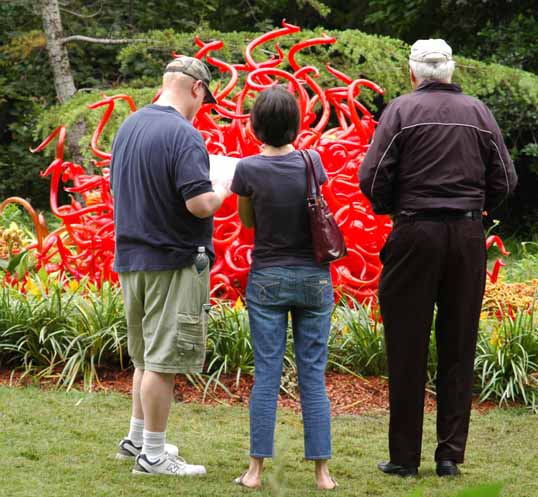 In case you think I’m full of shit when I write this stuff, here’s the woman I overheard asking about the fiddleheads. This was taken an hour later, and you can see, she is still looking at her guide book. She is now so tired of looking at it that she has her husband holding it for her. Or maybe that’s her husband on the other side and that’s her pool boy holding the guidebook. Or maybe the three aren’t related at all – maybe they are three technical writers that get together on the weekends to go various place and critique the guidebooks. 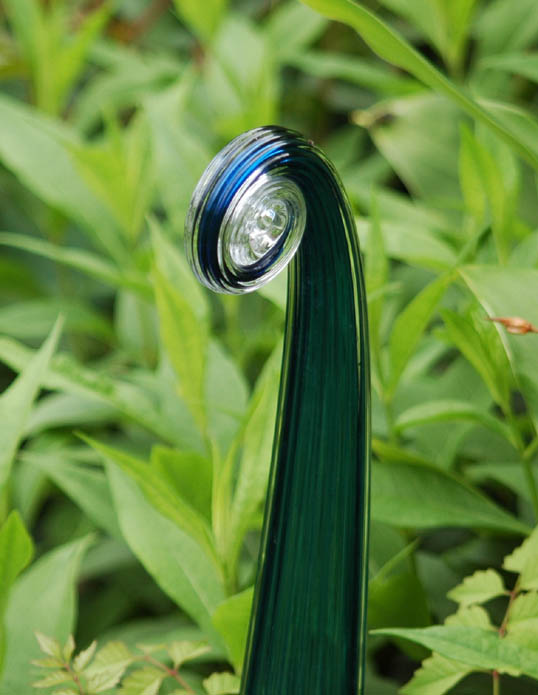 The glass ferns were growing in a bed of greenery. 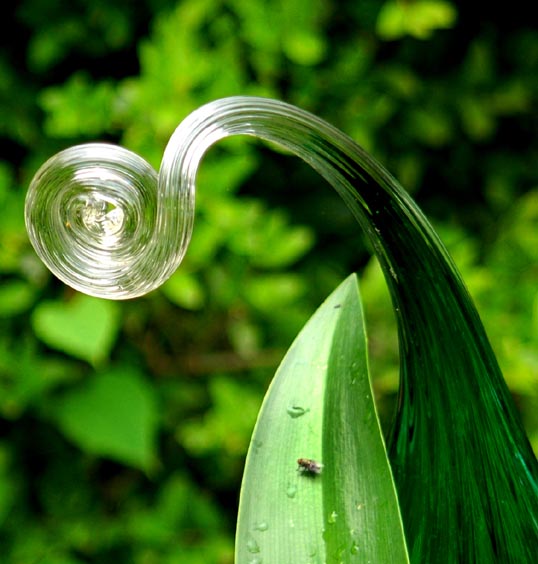 A fly enjoying the Chihuly Sculpture. I bet he didn’t have to pay to get in.