I decided to go downtown on Saturday for the first day of the Arts District’s Art in October celebration. The night before, I struggled to get to sleep, and didn’t get up as early as I wanted – but soldiered on anyway.

When I arrived at the DART station and was buying my ticket at the kiosk I looked up to see my train go by. They are scheduled every twenty minutes on weekends so I knew I would have to wait a while. No problem, it was a beautiful day and I settled down on a little seat on the deserted train platform and started to read my Kindle application on my Blackberry.

The Richardson Library now has Kindle books available for loan. I haven’t mastered the method yet, but I had managed to get a book of Billy Collins‘ poetry (“Ballistics”) to appear on the tiny screen – so that is good.

At a break between poems, I looked down and noticed a laptop bag right beside me, leaning up against my little seat. I looked around, nobody… so I unzipped the bag a bit and peered inside. There was a top-end laptop with accessories, including a really nice USB camera, folders of papers, and a VISA card stuck into a side pocket. I zipped it back up and sat there, trying to think of what to do.

A train going the other way pulled into the station and the doors opened wide right in front of me. I expected some panicked commuter to tumble out and yell, “Thank God it’s still here!” and grab his laptop case. It would be easy to get on the train and leave your case behind, but surely you would realize it was missing by the next stop. It would be easy to hop off and grab the next train back the other way.

I sat there for a second and stared at the gaping door in the train. I would love to have a nice high-end laptop like the one in the bag – among physical possessions that is the only thing I can really think of (now that I have my camera back). It would be so easy to simply stand up with the bag and get on that train. The platform was still empty.

I could actually see myself doing this – lifting the case and entering the train with a sigh, as if I was having to go to work on a Saturday. It would be the perfect crime.

A lot of people… maybe even most people (but not you, dear reader, surely) would not even consider this stealing. They would consider it a “found” laptop and they simply lucky. I wonder about people like that. What does the world look like to them? I guess they think of all the stuff that has been stolen from them and that the world owes them one now and then. I guess they have a piece of their head missing, the one that imagines the pain and suffering of someone else that has lost their valuables – in the case of a personal laptop, lost a big chunk of their life. Morality aside, a laptop case like that – with all the critical data in it – is a lot more valuable to the person losing it than to the person stealing it.

The train doors closed and it sped off.

Now what to do? My train would be there soon and I would have to make a decision. Obviously, until my train came, all I had to do was sit next to the case. Any thief would assume it was mine, only the owner would walk up and claim it. But my train would be the next one – nobody will arrive before then. Should I look in the case again, try to find a cellphone number? Should I take it with me and hope to locate the owner later? The easy thing to do would be to simply leave it where it sat and be done with it – but isn’t that about the same as stealing? I wouldn’t get to keep it but I would be abandoning it to a heartless and uncertain world – it would surely end in grief and while I would not be directly responsible and would not be aware of its fate, by inaction I would set the wheels in motion.

Luckily, I didn’t have to make the choice. I looked up and a Hispanic woman and a DART ticket official were walking up from the tunnel (the Arapaho train station is separated from the rest of the world by a wide, busy street – you have to go under it in a long pedestrian tunnel to reach the platform). The official asked me if the case was mine. She began to carefully probe the case, weary of terrorism (something that had not occurred to me until then). I didn’t mention that I had already opened it up. She moved the zipper and inch and saw the laptop within.

The woman that had made the report said the case had been there for a while, “At least five trains,” she said. She and I talked about how odd it was that nobody came back for the case. The official was making a report on her radio. I asked her if there was a lost-and-found and she said, “Yes, but I’m not allowed to do anything, I have to call for the transit police to pick it up.”

At that moment my train pulled up and I was gone.

On the train I went back to reading the Billy Collins poems on my Blackberry. The poems are short and I could pretty much digest one between each train stop.

One of them, “August in Paris” in typical Collins style, spoke of the poet watching a painter in France and standing behind the painter, taking notes, while he worked. He then made the jump to the reader, and how this readers can’t watch him work but he thinks about who they are.

He says, “there is only the sound of your breathing/and every so often, the turning of a page.”

I thought about this… how times had changed. There isn’t the sound of my breathing, but the clacking rails and the tumult of a crowded commuter train cabin. There is no turning of pages… only the silent movement of my thumb across the tiny black Blackberry trackpad and a new dinky screenfull of luminescent text appears. 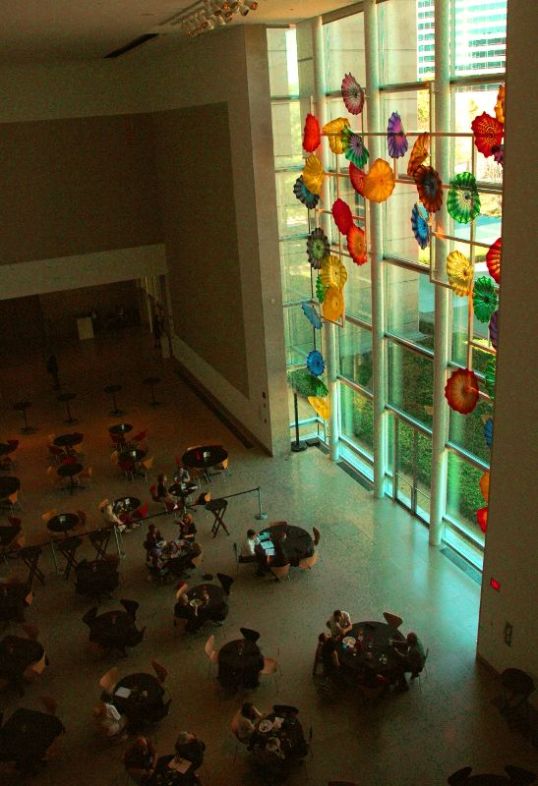 Dining area at the Dallas Museum of Art. Glass by Dale Chihuly. 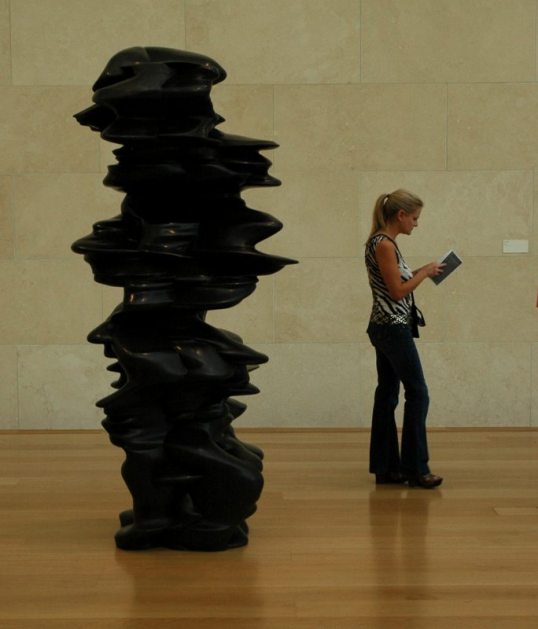 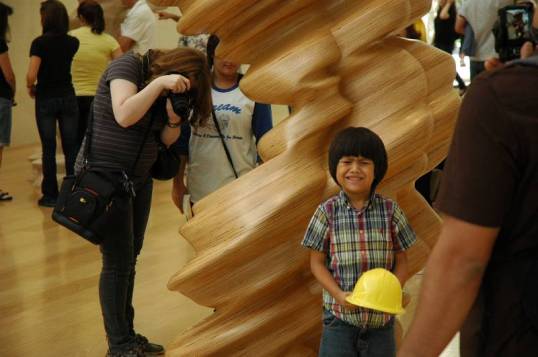 Everyone is taking pictures, not everyone likes it. 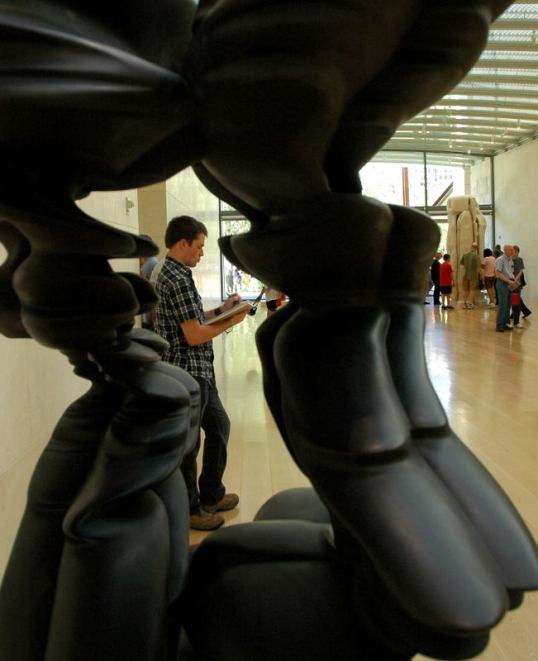 The one person not taking photographs was sketching 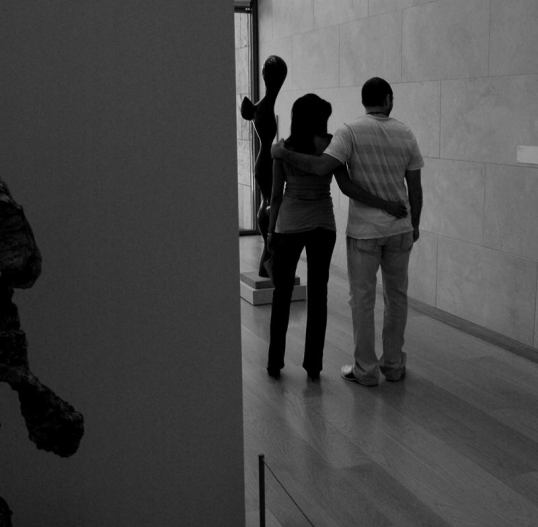 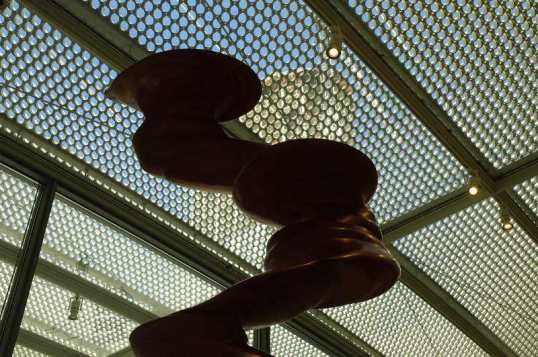 Ceiling of the Nasher

One of my favorite Bang Bang videos will not allow imbedding.

4 responses to “Shooting in the Galleries”