“Now tequila may be the favored beverage of outlaws but that doesn’t mean it gives them preferential treatment. In fact, tequila probably has betrayed as many outlaws as has the central nervous system and dissatisfied wives. Tequila, scorpion honey, harsh dew of the doglands, essence of Aztec, crema de cacti; tequila, oily and thermal like the sun in solution; tequila, liquid geometry of passion; Tequila, the buzzard god who copulates in midair with the ascending souls of dying virgins; tequila, firebug in the house of good taste; O tequila, savage water of sorcery, what confusion and mischief your sly, rebellious drops do generate!”
― Tom Robbins, Still Life with Woodpecker

“Sublime is something you choke on after a shot of tequila.”
― Mark Z. Danielewski, House of Leaves 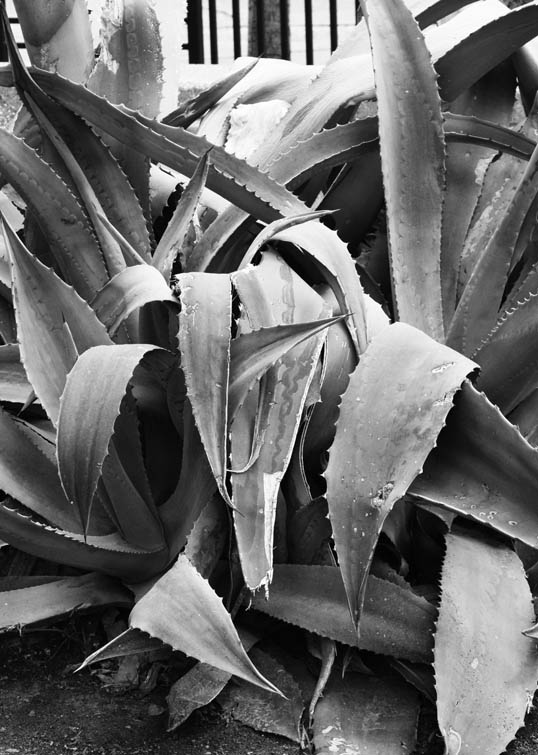 There is something gloriously insane about drinks made out of cactus. Do the spines infuse the alcohol?

I don’t know if this is a Blue Agave or not – probably not. That means if you ferment and distill it, you wouldn’t get tequila, you’d get mezcal – which is crazier still. There is a saying in Oaxaca, Para todo mal, mezcal, y para todo bien, también. (For every ill, mezcal, and for every good as well.).

Decades ago, when I was working in St. Louis on the Times Beach Dioxin cleanup I was at a late night party in a hotel corridor – the kind of decadent insanity that you see in a large group of young people that don’t know each other very well, working hard, long hours a long, long way from home. A woman took a bottle of mezcal, stuck it in her mouth and tilted her head back. We watched as she let the worm settle down through the clear liquid, down the neck of the bottle, and into her mouth. Without using her hands, only a gulp, the worm and a healthy helping of mezcal were gone.

For me, watching this, it was love at first sight. Unfortunately, I had no idea who she was and never saw her again.

At Whataburger, ‘Take a Number’ Means Something Entirely Different

I had a really nice bike ride along the Lafitte Greenway on my last trip to the Big Easy. Glad to see it will be continually upgraded.

10 of the Best Long Rail Trails in the US

I hope I live long enough to see The NETT on this list.

Brawn in an Age of Brains

Television’s 10 Best Anti-Heroes of All Time

According to the hypothesis of formative causation, morphogenetic fields contain an inherent memory, transmitted from similar past organisms by the process of morphic resonance.

I was really struggling to come up with a birthday present for Candy. I was going to get her a Keurig single cup coffee machine, but right before I went out and bought it she developed some stomach problems related to coffee and told me she would have to quit drinking it. So I was back at square one.

Surfing around the web and checking facebook I came across an upcoming event here in Dallas that I, frankly, had never heard of. It was called Savor Dallas – and it is a multi-day, multi-location, celebration of food and wine and stuff like that. One event was called the Arts District Wine Stroll.

The Stroll was billed as:

The popular “Arts District Stroll” sets the stage for the two-day festival on Friday, March 30th, 5-7pm, where guests can enjoy wine and food tastings in the Dallas Museum of Art, the Nasher Sculpture Center, the Meyerson Symphony Center, and the Winspear Opera House. A group of the popular new Food Trucks will be selling their goodies along Flora Street during the Stroll.

So I guess it is something like a pre-paid pub crawl, except with a little more class.

Well, it looks like we might be on to something here. Walking around the Dallas Arts District, visiting four beautiful public buildings, all designed by Pritzker Prize winning architects, while sampling food and wine along the way. Meanwhile the usual flotilla of Food Trucks waits along the route in case you don’t get enough along the way.

That sounded like a plan to me – so I logged in and bought a pair of tickets online (good thing I didn’t wait – the event sold out a few days later).

The event ran from five to seven – only two hours long. We didn’t want to waste any time, so I took a half-day of vacation from work and we decided to take the DART train down there to avoid any traffic or parking hassles. We arrived at the Winspear Opera house right at five o’clock, had our tickets scanned, received a green wristband and a wine glass, and we were off.

The thing was great. There were over fifty spots pouring out samples of wine spread among the four locations and a healthy handful of food spots. We hit the Winspear Opera house first (an excellent sake there, in addition to the wine), then moved next door to the Meyerson Symphony Hall. These were crowded, but the lines moved quickly and we were able to sample a good selection of wine and some excellent food.

I carried my camera and a small Moleskine Notebook with a matching fountain pen. I tried not to take too many pictures – it was really hard to hold a wine glass, little tray of food, and steady the camera enough to take decent photographs. I was going to take notes on particularly good wines – wines that Candy liked – I’m not a good judge, I like everything,… but it wasn’t really necessary, we simply picked up brochures and business cards from stuff we liked.

After the Meyerson we walked down to the Dallas Museum of Art. I liked it the best. Because it was down on the end and a longer stroll than the others, it was by far the least crowded and there weren’t any lines at all.

Best of all, though, they had a Tequila Sampling station. There were two attractive young girls in white skintight spandex minidresses mixing various tequilla concoctions and pouring out trayfulls of shot glasses for us to snatch up and sample. Some of the mixes (coconut and grapefruit juice) were a little off – I much preferred the straight, smooth tequila – but it was all pretty damn good. I could have parked myself in front of the tequilla sampling place, while waiters kept coming by with strange little hors d’ oeuvres – like lamb on plantain chips or oysters in tiny ice cream cones – all night long.

But it was time to move on and we walked next door to the Nasher for the final half-hour of the festivities. The Nasher garden is a perfect spot for something like this – a healthy crowd milling about the grass lawn of the garden, sheltered by the groves of perfectly groomed trees, sipping wine and eating food while about a billion dollars of modern sculpture looks on.

I slowed down on my alcohol consumption there – only trying a couple of wines – but there was some really good food. I had never had tuna tartare tacos before – and they were very good. I hate to say it, but with all the fancy top-shelf restaurants demonstrating their wares, I think the best thing I had was the tomato basil soup with mini croissant from La Madeleine. It was exactly what I wanted right then.

Everybody seemed to be having a blast. It hit just the right note – fancy enough to enjoy a special night out, but not too upper crust to be unpleasant or stressful. Candy made some new friends and I enjoyed the very diverse and interesting crowd. I even liked the fact that at two hours it was fairly short. It seemed to end right at the right time, we had all had our fill but didn’t get too worn out yet.

I’m definitely going to give this a shot next year. I’ll have to remember to get tickets early again – I’m sure it’ll sell out. It would be nasty if the weather was bad – you wouldn’t want to stroll around in the rain or a storm…. but if that happens I could simply find the tequila place and stay right there. 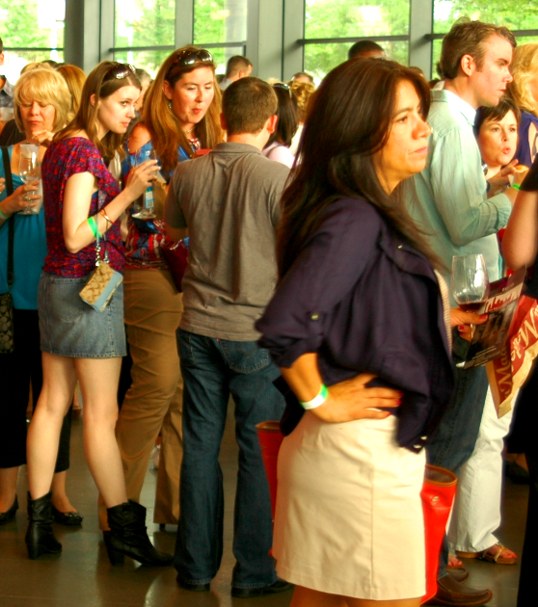 The crowd milling around in the Winspear Opera House, sipping their wine 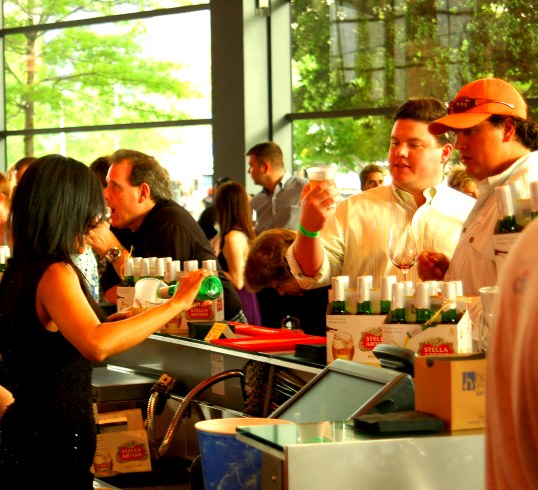 In the Winspear Opera House - the wine folks would only pour a taste, but the beer people, like these Stella Artois reps, would give you a whole bottle poured into a big cup. Yeah! 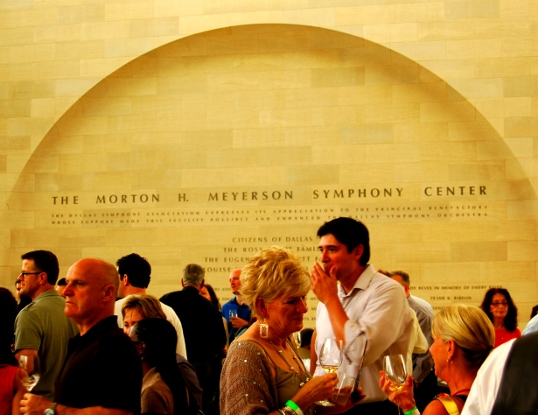 In the Meyerson Symphony Hall. 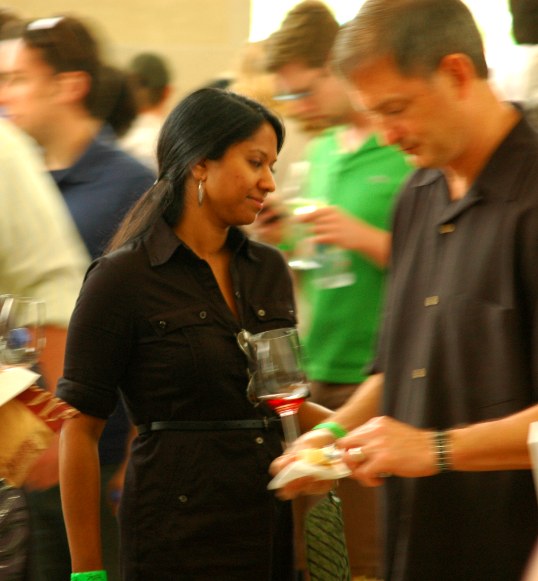 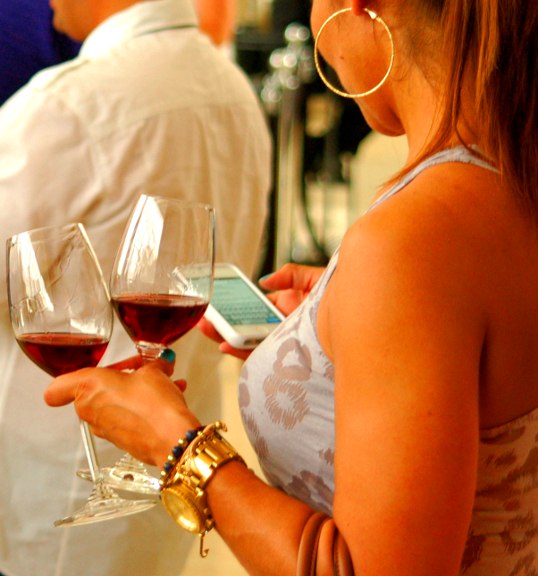 Wine at the Meyerson 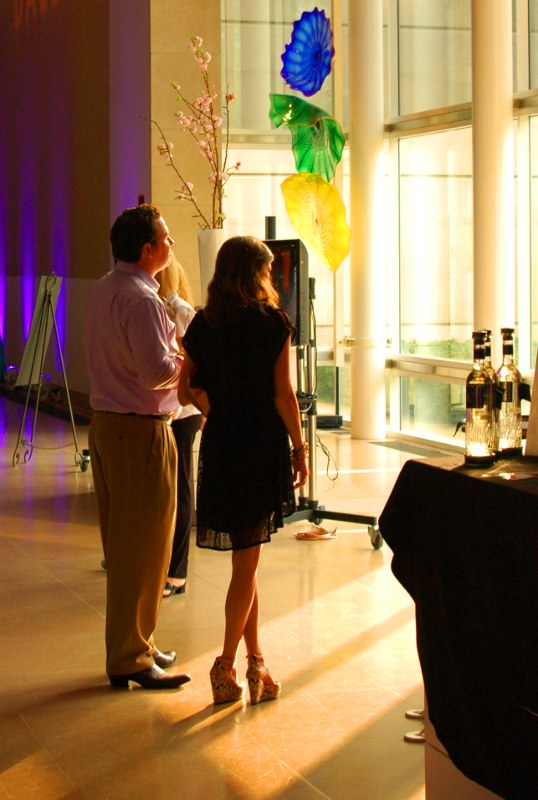 The light pouring into the Dallas Museum of Art 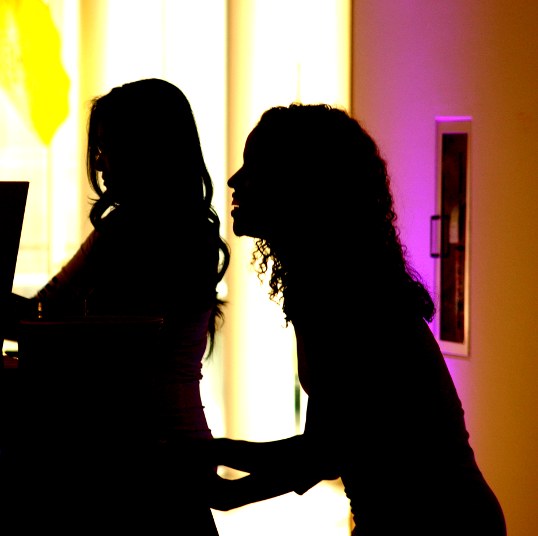 The Tequila girls at the Museum of Art 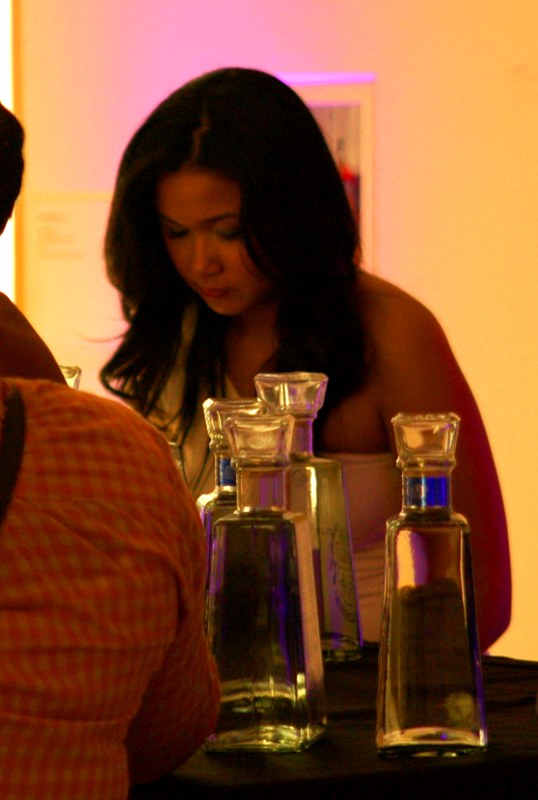 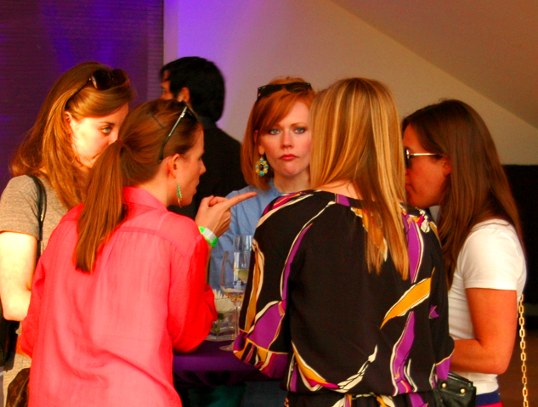 One of the nice things at the Museum of Art is they had some semi-live music - a guitar player using some pre-recorded backing. It was very relaxing and everyone hung around and talked. 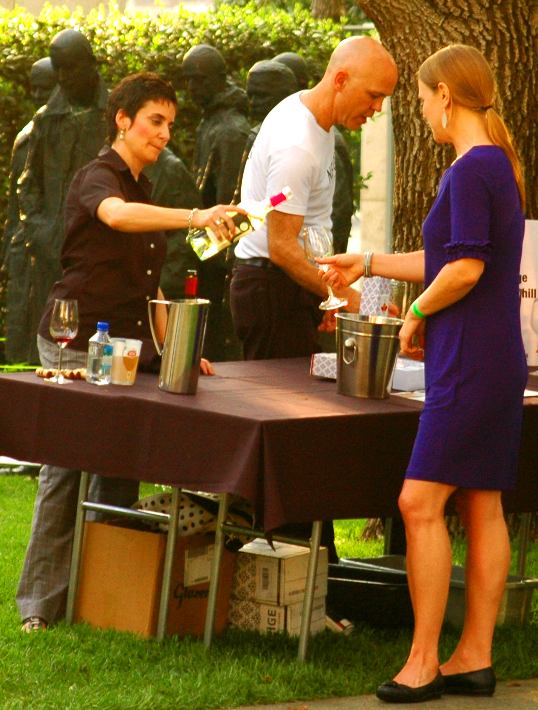 Pouring wine while the folks from Rush Hour, by George Segal, look on. 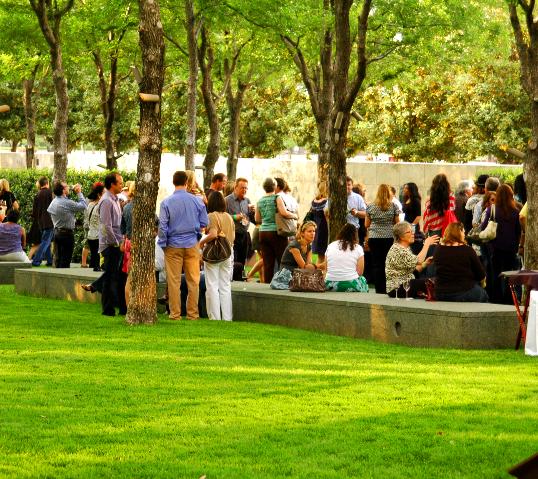 The happy crowd in the Garden at the Nasher Sculpture Center. 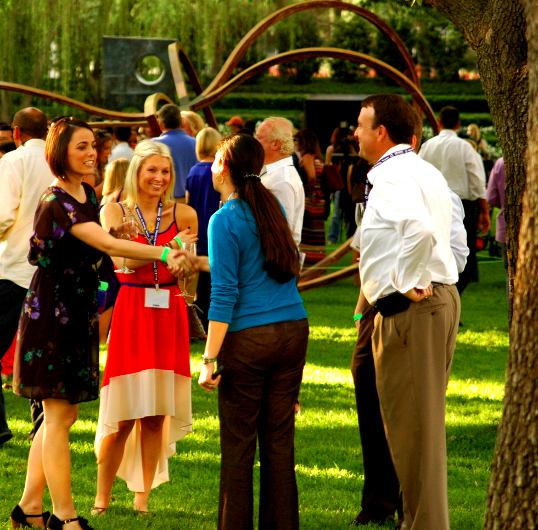 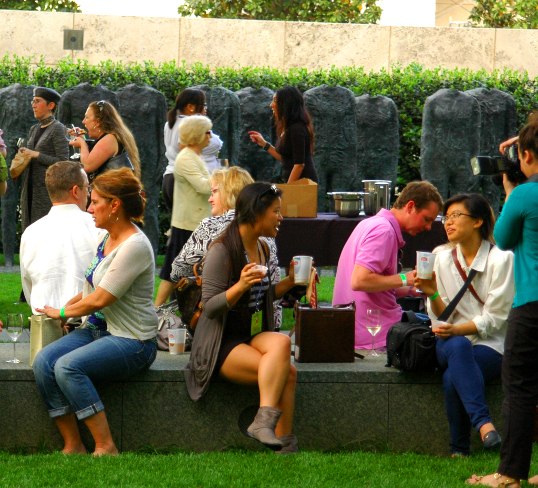 Hanging out at the Nasher on the stone wall in front of The Bronze Crowd, by Magdalena Abakanowicz. 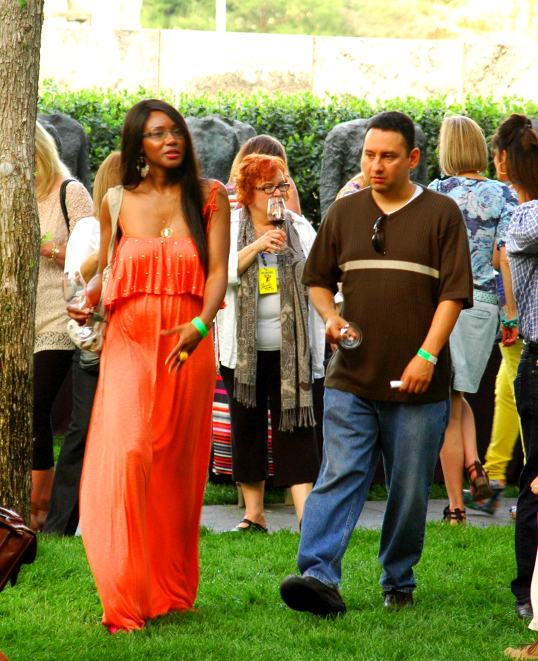 Folks at the Nasher 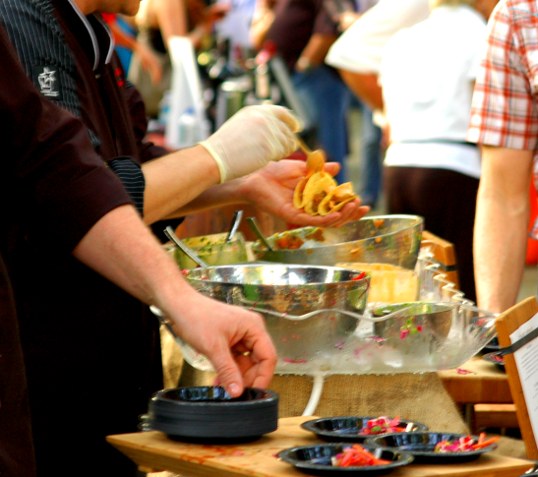 I can’t say we tried everything they had on the Stroll – but I know we tried most of it.