I drove to the Big Easy over the weekend to pick up my son Lee (who just graduated from Tulane) and bring him back to Dallas for the holidays. Since I had plenty of room in the car I removed the wheels from my commuter bike and packed it in.

I have always wanted to ride a bicycle in New Orleans and never have. The French Quarter especially is full of folks on bikes (both natives for transportation and tourist rentals for entertainment) and I have always enjoyed hanging outside and watching folks ride by.

Photos I’ve taken of bikes in the city: 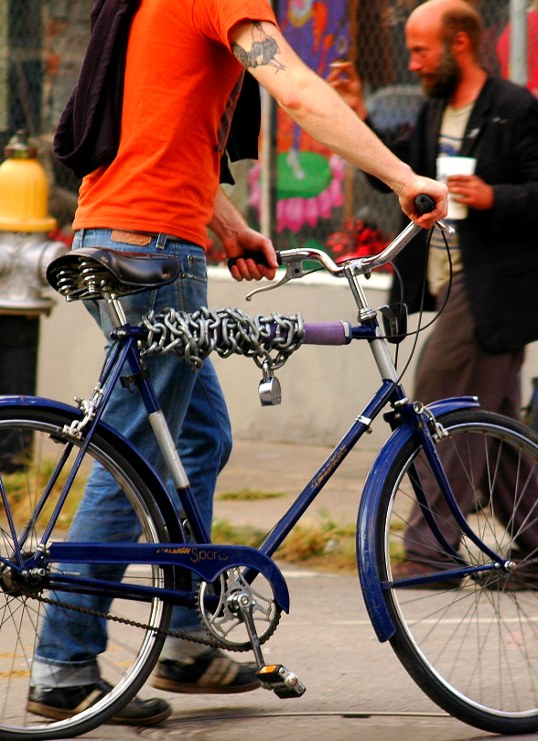 My son lives out by the university and I thought I might ride through the Garden District down to the quarter and back – it would make for a nice long day with plenty of cool places to stop along the way. He was working Sunday and I would have time to myself.

Unfortunately, the weather did not cooperate. When I arrived the city was unbearably hot and humid and on the day I had planned on riding a cold front blew in and brought a powerful set of thunderstorms with it.

My commuter bike is set up with fenders and I have rain gear – but this was too much. A good rule of thumb is that when the lightning is so violent the thunder is setting off all the car alarms in the neighborhood every few seconds – it’s storming too much to go out.

This went on all day. When it would lighten up a bit I would think about venturing out – but another band would blow onshore and the skies would open up with a drenching downpour and howling winds. I ended up staying inside all day.

We were going to drive back to Dallas the next day, but he had some things he had to do in the morning so we couldn’t leave early. That gave me time to get in a quick little ride before we left. It was still very cold (for New Orleans), wet, and windy – but bearable, so I headed out.

I rode through the Tulane campus, now empty for the holidays, and up St. Charles for a bit (they have a bike lane along some of the street). St. Charles in New Orleans is the most beautiful street in the world (in my opinion) though the traffic is pretty nasty for a bicycle.

The city has sharrows painted on Nashville so I chose that route down to Magazine Street and rode there for a bit looking at the shops and restaurants before heading over to Audubon Park and circled the zoo down to the Mississippi. 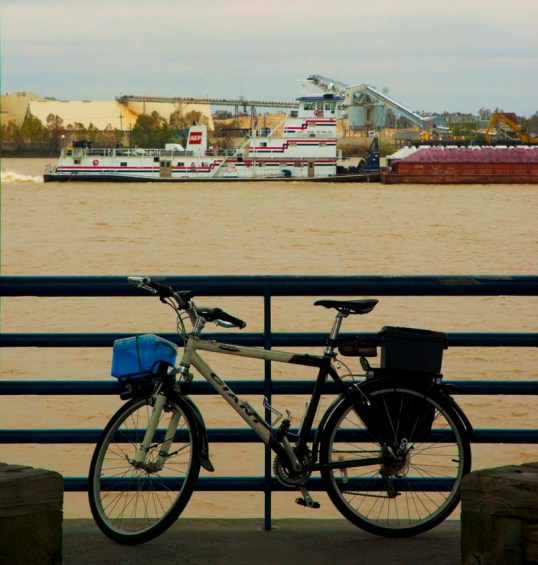 My Bike along the Mississippi, New Orleans
(click to enlarge)

I rode back through the park and the Tulane campus then took a side trip down Freret to cruise through a nice up-and-coming area of shops and restaurants.

That’s about it. It was fun, glad to get it in. Lee warned me the streets were rough and he was right. I’m glad I have a front shock on my commuter bike – the ride was through a constant series of cracks and potholes. As I rode toward the river I thought to myself that it would be uphill coming back – in Dallas the streets slope surprisingly steeply down to the Trinity River – but in New Orleans it isn’t true, of course. That city is about as flat a cycling route you will ever see.

The traffic there is nasty, of course. I’m sure you could get used to it – but it’s pretty tough, even compared to Dallas, which is well known as the least cycle-friendly city. The key is to learn your town, your neighborhood, and your routes – which can’t be done in one cold and blustery morning.

Now I need to go back when the weather is better and do a bit more exploring.