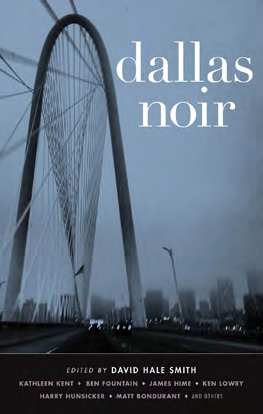 About a year and a half ago, I read a book called New Orleans Noir – which I enjoyed a lot. It was a collection of DARK short stories all set in a city I love very much… and a city, despite all its frivolity and fun, that has plenty of opportunities for that side of the human spirit.

The book was part of a series of noir short stories tied to individual cities. After reading it, I had a thought, “I wish they would do one of these on Dallas – but they never will.” I was wrong.

I missed it when the book was published or I would have gone to some of the events. I didn’t find out about the book until it made the rounds on social media. When the publication of Dallas Noir popped up in my facebook feed I was really excited. And in this day of ebooks and instant gratification, fifteen seconds later I was looking at the table of contents.

What was even cooler is that I have personally met two of the authors – I read their stories first.

David Haynes is an Associate Professor and Director of Creative Writing at SMU. About a decade ago I took a couple of classes in fiction writing from him through the Writer’s Garrett. I’ve always been amazed at how much more I learned from these than from my college writing classes (which set my writing back over a quarter-century – it’s my college writing classes that are responsible for me being a chemist).

His story, “Big Things Happening Here,” Oak Lawn, was more than excellent. Unique, subtle, very “literary” – it tells the story of two men that witness someone being abducted in a tony suburb and are drawn into a vast conspiracy… or maybe not. A thought provoking tale of the possibility of a secret undercurrent of modern life – an illustration of the adage, “Simply because you are paranoid doesn’t mean they are not out to get you.”

Next I read a story by Catherine Cuellar, “Dog Sitter,” Love Field. I have met her a number of times at events in the Arts District and bike rides. Her contribution was on the more civilized edge of the noir genre – a story of a domestic worker that kills a passerby by accident. It’s a finely characterized tale which captures the delicate and difficult life led by those right under our noses, yet right outside of the mainstream of society.

After those two I cranked through the collection in order. I was familiar with many of the writers – I’ve been reading Ben Fountain and Harry Hunsiker for a while. There was a wide variety in all the stories – which made it as enjoyable as a box of chocolates – but the locations were all familiar. They did a good enough job of inserting locations and people that any Dallasite will recognize to give me the creeps as I ride/drive/move around town and see things that remind me of the stories.

The last story was by Jonathan Woods, “Swingers Anonymous,” M Streets. I enjoyed his collection, Bad Juju & Other Tales of Madness and Mayhem – driving down to the Pearl Cup on Henderson to hear him read one night. I’ve always admired his writing – because he doesn’t fuck around. He writes like a truck wreck… the story comes at you two hundred proof and on fire. True to form, his story in Dallas Noir has a classic “grab your attention” opening line:

We all went over to Pauline’s to admire her breasts.

How can you not finish a story that starts like that?

Dallas Jail complex with the Margaret Hunt Hill bridge in the background.
(click to enlarge)