I spent a few more minutes sweeping the bridge over the Trinity River than I had intended, so I had to rush out. Bike Friendly Richardson was doing their annual Black Friday Ride at 1PM and I only had twenty minutes to get out to Beltline and 75. It shouldn’t have been a problem, but this was Black Friday and my GPS showed a dark red streak at 75 and Northwest – folks were backed up trying to get into Northpark Mall. Nothing to do but wait it out.

So often when I’m in my car these days I wish I was on the bike.

It wasn’t too late when I arrived… I was able to put my old Technium together and ride out with the group, no problem.

It was a very nice, easy ride – a ten mile tour of the “other” side of Richardson, across 75 from where I live. I said, “It’s nice to ride around Richardson and not look for sculptures.” We stopped at the Pearl Cup for some coffee and then rode back. The weather was perfect – not a breath of wind… maybe a little cool when stopped, a little warm when pedaling. 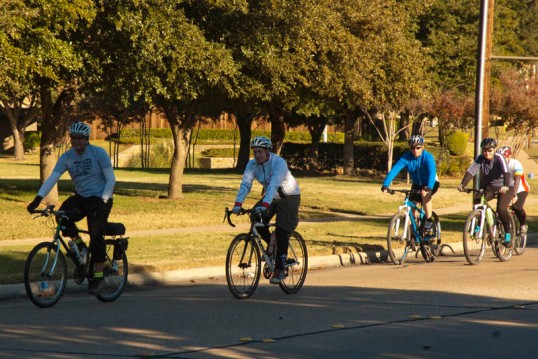 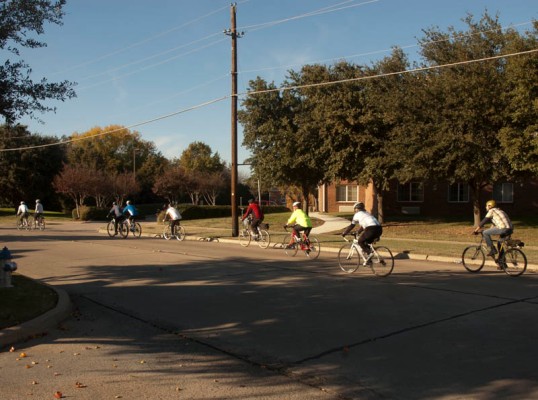 Waiting for a flat to get fixed.

After the ride, I should have stopped in for some beer at Haystack, but this was only the second of three bike events I wanted to do. This was the last Friday of the month – so it was best that I head home and get ready for Critical Mass. I was worried about the weather, but shouldn’t have been – it was as nice as it could be.

Usually I am a stickler about leaving my house on my bike but today I thought it prudent to drive to the Forest Lane DART station and leave from there. That way, if I missed the midnight train home, I could ride to that station on the White Rock and Cottonwood trails.

The Critical Mass rides are getting smaller now that the winter is here, but there were enough hard-core fans to make it fun. One interesting thing about these rides is that nobody knows where they are going until they get there. The Black Friday route looped through downtown and then Deep Ellum, ending up on a winding path through Fair Park.

Riding through the fairgrounds with a big group on bicycles after dark was pretty interesting and a lot of fun. We wound through the art deco buildings, past the wonderful murals that loomed overhead in the gloom of darkness, and around the sculptures gleaming as best as they could in the murk. Finally we looped past the bright lights and giddy crowds of the Chinese Lantern Festival which was a riot of bright color thrust above the opaque night. 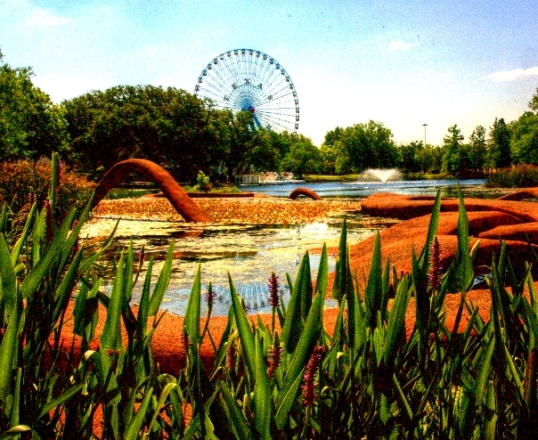 A pond in Fair Park. The red paths are part of a massive sculpture by Patricia Johanson. I have always loved those red paths running through the water, weeds, and turtles. A neglected jewel in the city.
– it was a lot darker on the bike ride, of course.

Mural at Fair Park, taken during the day.

The bicycles poured out of the park and everyone split up to go to their favorite night spot. I had a quick beer at Craft and Growler and then received a text that Candy and Lee were with friends and relatives at Rustic, in Uptown. After some thought, I realized I could get there on my bike, so I rode up Exposition, through Deep Ellum, across Downtown, then turned north through Uptown to get to Rustic.

I really enjoy riding my bicycle through the big city at night. The traffic is broken up and I have decent lights, so I feel surprisingly safe. The cool night air, the giant glittering buildings overhead, and the close look at the heart of the metropolis from the saddle is a lot more fun that fighting the traffic and looking for parking spaces.

I locked my bike outside on a light pole and walked past the disapproving stares of the doormen carrying my helmet under my arm. The Rustic isn’t my kind of place, but it was fun to see everybody. One good thing is that it is right next to the turntable at the end of the streetcar line and the long escalator down into the DART tunnel – so we rode that back to my car and home. Taking my bicycle down that escalator was a bit awkward – but it worked.

Candy’s car was at another DART station so I left again on my bike to go pick it up, getting home at about one AM. A nice long Black Friday – mostly on a bicycle.