One of the comfortable, reliable, everyday things in my neighborhood is the man between the ponds in the park down at the end of my block. Most mornings (not all) there is a man standing on the concrete apron between the flood control ponds doing exercise – somewhat like Tai Chi Chuan, but a little more violent and martial-arts like. I see him when I drive down my alley to go to work. My son, Lee, has said he saw him years ago when he was running cross country before school.

I have paused on my commute and snapped a photo of him, written a quick blog entry, here and here. But I’ve never been able to get a good look because I’m always late for work and don’t have the time. The other day, however, I saw him for the first time on a weekend morning while I was leaving for a bicycle ride and had time to circle around into the parking lot and get a shot from the other side. By that time… another man had joined him.

I’d like to talk to him and find out exactly what he is doing – but I respect what he’s up to and don’t want to disturb his concentration. 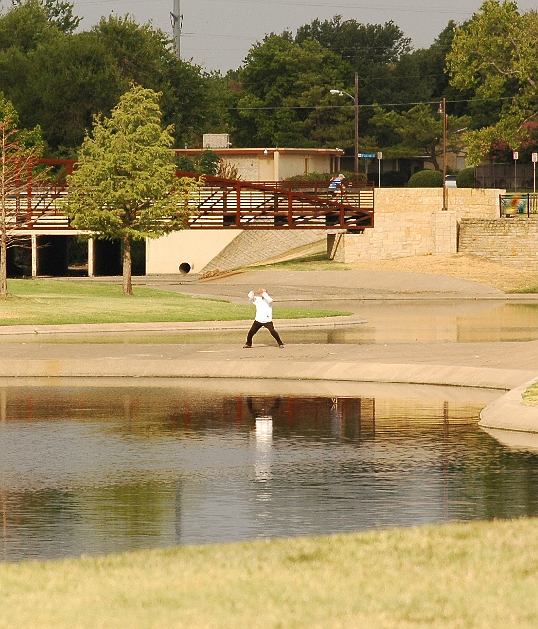 Usually, I see the man standing still, but sometimes he’s moving quite a bit.

I drive across the little bridge beyond the man on the right every day on my commute to work.