Back in July I posted a quick entry about a man that was doing Tai Chi Chuan (or something) between the two flood control ponds at the end of my block. He’s out there most days at about the time I go to work. 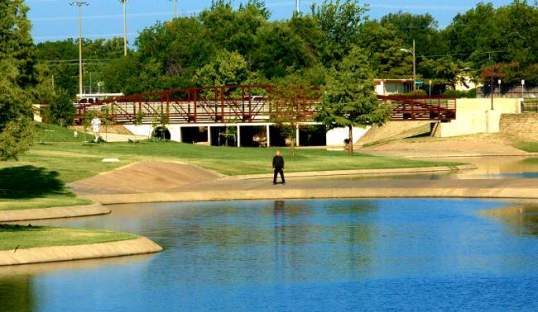 Man between the ponds

He’s become sort of a welcome sight for me in the mornings. I like it when he’s there.
This weekend, I had to work on Sunday, so I headed out at eight or so down the alley. This time, there were two men out exercising between the ponds. One was, I suppose, the same guy as usual, in his black outfit; the other was wearing white.
Unfortunately, the other day I accidentally opened my camera case upside down and my camera fell out. I’m working on saving enough money to get it fixed (yes, it’s killing me). All I had was my Blackberry, so I took as good a picture as I could.

Men Between the Ponds

Maybe someday there will be three.

2 responses to “Two Men Between the Ponds”