I have always been stupidly fascinated by the reflection in Campbell Centre from the DART Red Line train. 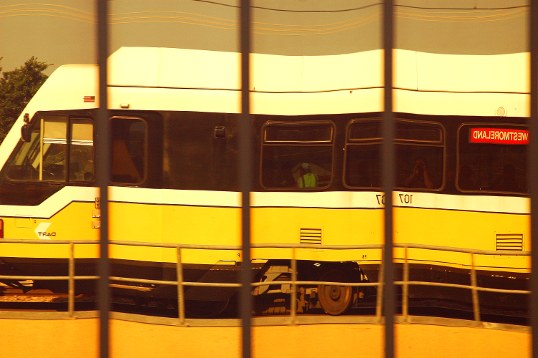 Red Line DART Train reflected in the gold mirror of Campbell Centre at Northwest Highway and 75.

“My Curves Are Not Mad” by Richard Serra

It was a cold (well, cold for Dallas) wet and miserably gray day. Storms all night and rolling bands of rain driven down from a dark sky all day. A perfect fall day to huddle inside… maybe read a little, eat the last of the leftovers, maybe watch some football on TV, maybe do nothing at all. And that’s what I did.

But there was one burr under my blanket. I wanted to see what the ice sculptures were doing in downtown Dallas. I had seen Transendence at its unveiling, one day later, and now… what was it up to? It had been raining constantly and I knew that fresh water from the sky would melt the ice quickly, so I had no choice but to head out and drive down there.

The roads were wet, the visibility was poor, and, of course, everybody else was driving like bats out of hell – so the drive was stressful enough. I pulled up and parked illegally right next to the installation (there was nobody, and I mean nobody around). Luckily, there was a bit of a break in the weather – only a cold spitting windy miserable drizzle.

The first thing I noticed was that they had put out some hand-lettered signs all around the place that said, “Keep Off Gravel (Art Exhibit).” No shit, Sherlock. If those had been out there that first night, would all the drunken idiots have trampled all over the place? Whatever. For the first time, there were no tracks at all across the raked gravel. Never underestimate the power of a hand-lettered sign. The Sharpie reigns supreme.

The human figures were melted into unrecognizable shapes. Their heads were gone, arms mere suggestions, their stone hearts seemed poised to plunge from their bodies to the gravel below.

I know that is what they are supposed to do, it is their purpose – but it is still a little sad to see the beautiful things come to such an end.

The rectangular blocks, on the other hand, are fairing a lot better. They have shrunk a little, one is tipping a bit, but are still intact. They may last quite a long time.

The flesh is feeble, weak, and transient, while the crystalline inanimate geometric mass resists the heat, the water, the slings and arrows and survives until the bitter end. It is the way of all things. 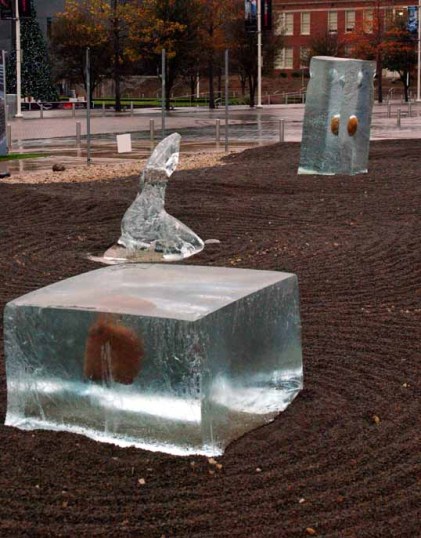 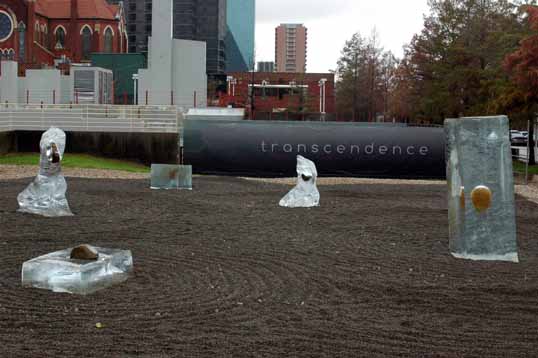 Here are three pictures of the second human figure on each of the three days. If I had thought about it, I would have carefully taken pictures from identical spots, using identical lenses, on each day… but I’m an idiot. Sorry, that would have been cool. 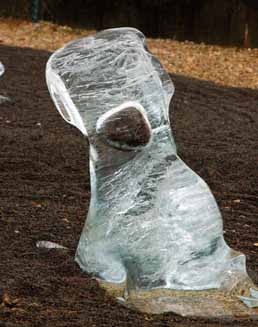 After a day of melting in the rain

It was Sunday and the Saints were playing downtown. The Saint Charles Streetcar was crowded.

Getting off the Saint Charles Streetcar in the Garden District.

Red Line DART Train reflected in the gold mirror of Campbell Center at Northwest Highway and 75. 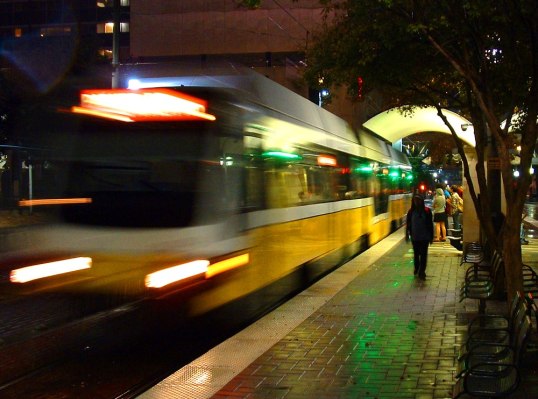 DART train at the Plaza of the Americas (click to enlarge)