“I would rather die of passion than of boredom.”
― Émile Zola, The Ladies’ Paradise 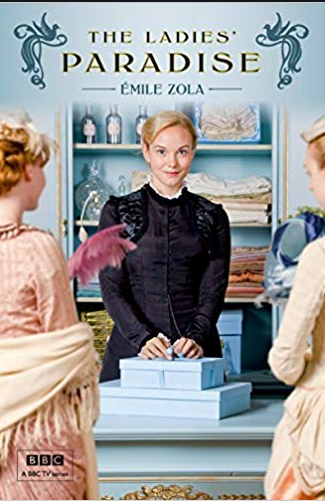 I am now a good chunk into Emile Zola’s twenty volume Rougon Macquat series of novels. Attacking this pile of books in the recommended reading order:

The next one up was The Ladies Paradise.

The overall story is a very thin romance between a poor, country girl that comes to Paris and finds work in a new, rapidly expanding department store and the owner of the store. He is Octave Mouret, the relentless womanizer of the book before this one – Pot-Bouille. His desire to possess women has now metastasized into the need to dominate them commercially by creating a retail establishment that they cannot resist – literally a ladies’ paradise.

But the real protagonist of the story is the store itself – the eponymous Ladies Paradise. Large swaths of text are dedicated to detailed dreamy descriptions of the store, its wares, and the elaborate displays set up to show off the goods and lure in the women of Paris and, most importantly, to separate them from their money.

As the book progresses the store grows and grows, taking over building after building, until it dominates the area and all retail commerce. There is a heart-tearing description of the woeful ends of the various small shopkeepers of Paris – trying to scrape out a living selling cloth, shoes, or umbrellas – until they are inevitably ground under the heels of the behemoth growing through the streets – their owners are driven into bankruptcy, poverty, and madness.

The book was written a couple of centuries ago – but it is a story that is still going on today. We have all seen small businessmen destroyed by large corporate chains that offer lower prices, bigger selections, and spectacular shopping experiences. It is a story that could take place in the last couple of decades.

Except today, even those huge conglomerates are being driven out of business by a technology that Zola couldn’t even imagine – online shopping. Though, now that I think about it, The Ladies Paradise puts together a company of horse-drawn delivery vans, with advertisements plastered on the side, that resembles today’s fleet of Amazon-Prime vehicles.

The novel’s fictional department store was modeled after a real place – Le Bon Marché in Paris. The store is still open.

This was an enjoyable tome in the series, though the long, detailed descriptions of ranks upon ranks of goods placed on sale went on too long for my taste – but probably necessary to drive home the point of the plot. It was simultaneously a record of the past, an reverse echo of the present, and a warning of the future.