“Here is a good message from the ocean: You will be an ocean too if you let every river, every rain, every flood and every stream flow to you freely!”
― Mehmet Murat ildan

I have written about it before.

All my life I have wanted to live on a creek lot. I remember living in East Dallas and riding my bike along the hilly lanes east of White Rock Lake (back then I was young and thin and fit and I welcomed hills – now I’m afraid of them) and spotted homes along streams – some with little patios down among the trees perched out over the water. They would have a grill, some seats, and I imagined knots of people at sunset enjoying the setting – always wanted that sort of thing.

My wish finally came true, sort of, when we bought our house in Richardson. Technically it is a creek lot – but the creek (which emerges from the flood control ponds in Huffhines Park at the end of our block and runs a short distance beyond where I live to join with Duck Creek) has been manmade wrestled into an arrow-straight path. It’s really more of a ditch lot.

On most days it’s barely an algae and trash encrusted trickle. There are a lot of ducks and turtles (both the friendly box and the prehistoric snappers) with a nighttime cohort of opossums, bobcats, coyotes and an occasional beaver. There are a few trees – but the number is limited by the Corps of Engineers to insure proper flow. They only allow new plantings when an old tree dies. It’s a sleepy stretch, mostly useful to the local kids and cats, feeding and stalking, respectively, the ducks.

That changes with frightening rapidity when a big Texas thunderstorm strikes. The water rises and moves in a symphony of wet muscular gravity.

Last night one hit, hit hard. The ground was already saturated, the flood control ponds already overflowing when the sky dropped six inches of water in a couple hours.

I opened the garage door and looked out through a forest of honey globs of water caterwauling off the roof into the dark. Illuminated only by staccato bolts of lightning like a galvanic Gene Krupa, the bellowing water stilled by the strobing arcs into impossible waves rising above the creek banks and beyond. The usual quiet night lit up by blue thunder. The gleaming fury as millions of gallons of deafening water scream by is frightening and intoxicating. I watched from my house – afraid to get any closer.

This morning I walked around the strip of creek, grass, and trees. The highest water level was marked by a line of twigs and plastic water bottles. In several places the delimitation moved up over the bike trail and almost kissed the alley that runs behind the houses. By then the creek was down to its usual level, having dropped as fast as it rose, with only a little more water flowing by than usual.

I did think of those little patios perched in the winding creek lots of East Dallas. I always liked them – but I’m sure they are all gone now. 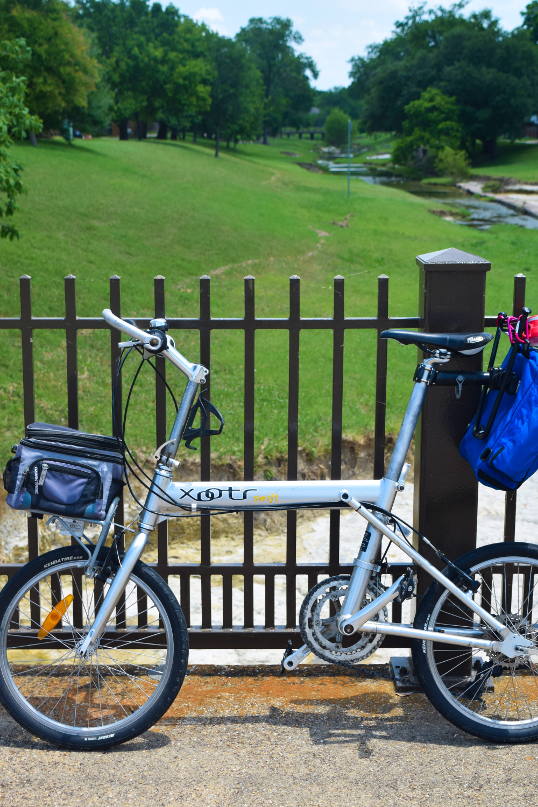 My folding bike on a bridge over Huffhines Creek. 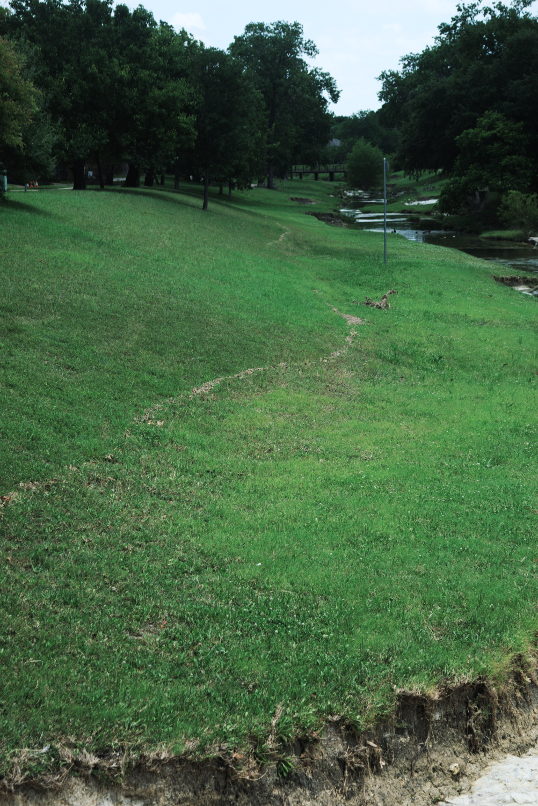 A line of detritus showing how high the creek had risen the day before.

I wrote that four years ago, but the creek continues to rise with every powerful thunderstorm. On my daily bike ride I stopped on the bridge over Huffhines creek and took a shot of the line of trash that marks yesterday’s high water mark. I’ve seen it quite a bit higher than this.

Not all that spectacular, but imagine what it looks like with all that water roaring down that little space behind my house. The amazing thing is how fast it rises, minutes is all it takes.

Now, I need to get a before and after shot – harder to do than you would think. Especially to do safely.

4 responses to “You Will Be An Ocean Too”