“Have you also learned that secret from the river; that there is no such thing as time?” That the river is everywhere at the same time, at the source and at the mouth, at the waterfall, at the ferry, at the current, in the ocean and in the mountains, everywhere and that the present only exists for it, not the shadow of the past nor the shadow of the future.”
― Hermann Hesse, Siddhartha

I have written about it, here, many times before – All my live I have always wanted to live on a creek lot. For the last decade or so I do, sort of… it is more of a ditch lot – the creek is tamed into a straight line in the middle of the block, exactly between property lines. No natural watercourse flows in a straight line.

It is tamed in terms of location and direction… but not in terms of flow. Usually a quiet narrow strip of water barely moving, when it rains the water rises and becomes violent.

The last storm (not the big one, a couple days later) I took some photos from the Yale Street Bridge right when the rain ended and again, the next morning. 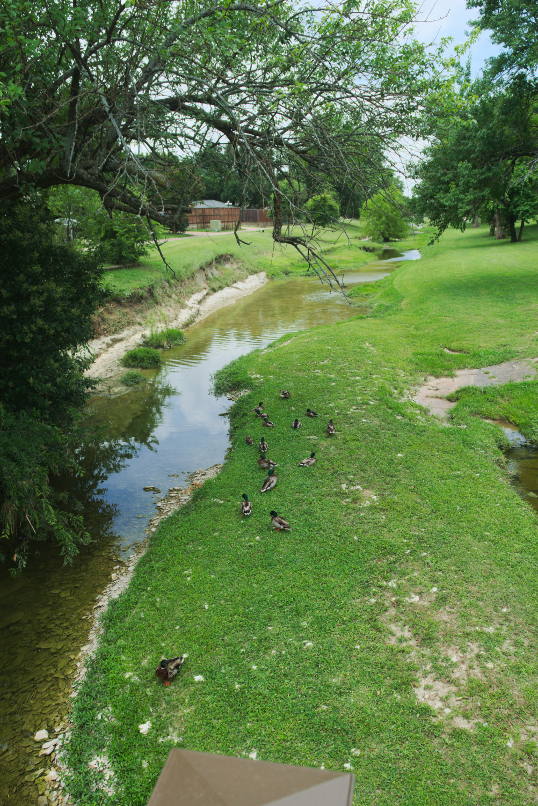 Huffhines Creek, From the Yale Street Bridge, upstream, after a rain.

Huffhines Creek, From the Yale Street Bridge, downstream, after a rain.

The crazy thing how fast this transformation occurs. Despite the buffering of the flood control ponds upstream during a thunder-boomer the water will come down in a wall and the creek will rise in seconds. When it ends the water drops almost as fast, leaving only a line of detritus as a reminder of the violence that was there minutes before.

These are by no means photographs taken under extreme conditions. That little bit of water visible in the before photos will almost completely dry up in July and August, evaporated under the deadly Dallas Texas summer sun and inevitable drought. This was only an ordinary spring thunderstorm, I’ve seen the water significantly higher (over the bike trail, for instance). I simply can’t get a photograph of that because of darkness and/or fear.