A while back, Chris of Biking in Dallas contacted me to help set up a bicycle ride. He and Amanda of Dallas Cycle Style had the idea of a slow bike ride dedicated to photography.

The idea is that on so many bike rides you see something that you want to stop and look at – or take a photograph of – but the ride goes on. We wanted to do a ride that was purposefully slow, more or less dedicated to photography, and that would go and stop whenever the fancy took us. The ride was called Stop and Photograph the Roses.

I took on the task of designing the route. We wanted to start in the Dallas Arts District, visit downtown and some photogenic spots in the area. My first routes were too long with too many stops. Thinking about it, there were simply too many places that I thought people would want to see and take pictures of.

What was left was a route that started at One Main Place, went through the Arts District, then on to the new Belo Garden Park by way of the Dallas Eye. Then Commerce Street to The Farmer’s Market – with a stop there for rest and lunch. Finally, a short ride past some favorite murals of mine to Fair Park and then a return through Deep Ellum.

We had a surprisingly good turnout – maybe thirty folks. As the day went along, it began to get hot and we lost some folks along the route – there is so much going on this time of year, but more than a handful stuck it out the whole way.

I think everyone had a good time. It will be cool to see the photos that everybody else took as they filter across the internet. The one disadvantage of planning the route is that I was familiar with almost everything along the way – and already have taken (and placed on this blog) shots of most of what we saw.

Still, that let me enjoy the ride more than the photography – and I still collected enough for a few blog entries to fill in some upcoming days.

And now I think of the places we didn’t go. Maybe we can do another….

Amanda, Chris, and I

There is a cool little hill in Belo Garden Park 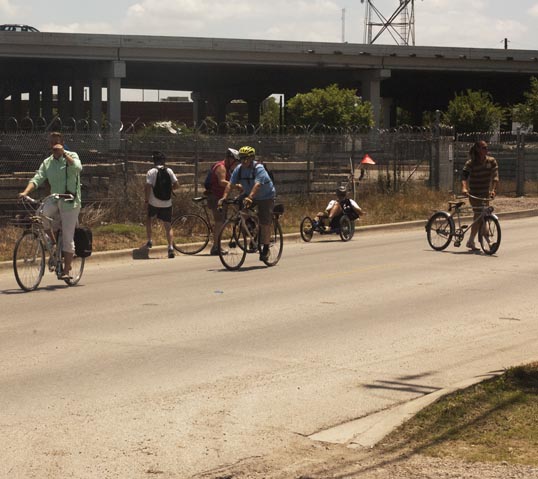 Stopping to look at a mural along Hickory Street. This is a part of the city most folks don’t visit.

A Facebook Video from Andrew Pearson – an interview with Chris Curnutt on how the ride came about.

10 responses to “Stop and Shoot the Roses”