It was a nice day today, the first really warm day (over 90) of the year. I wanted to get in a bike ride, so I sat down with Google Maps to figure one out.

Recently, the city of Plano has built a nice connector trail that runs from Oak Point Park in the east, across and under Highway 75 to connect with the Bluebonnet Trail and the rest of the trail system. I had stopped to explore this the other day on my way back from a visit to Frisco. That’s the nice thing about keeping my folding Xootr Swift in the back of my car – I can stop whenever I feel like it and explore.

I drive a tiny car – a Toyota Matrix. I always liked it because I could fold the rear seats down and get a bike (barely) into the back of the car (never liked exterior bike racks). I was surprised at how small the Xootr Swift folded down. I was able to fit it easily in the small space behind the rear seat. Now I have a four-passenger car again.

So I put together a fifteen mile ride (that linked map is backward – I decided at the last minute to ride the route in the opposite direction). I’d start in the north parking lot at Collin Creek Mall and take fifteenth street east and then P street north until I caught the trail that runs down to Oak Point. Then north through the park, and west on the new trail to the Bluebonnet Trail. I could it to the intersection with the Southeast heading Chisholm Trail which would take me back to my car.

It was a nice ride – with a lot of varied scenery. It stared in a real urban high-traffic area, then the woods and meadows of Oak Point, the odd urban pasture under high tension wires of the Bluebonnet trail, and finally a quiet suburban neighborhood.

Going through the park was interesting. First, in a wooded section, a bobcat ran across the trail right in front of me with a mouse in his jaws. I know they are there, but you don’t see too many bobcats, especially in the bright of the day.

As I worked north, I started coming across crowds of people walking along the trail. There was a huge music festival – the first Suburbia Music Festival – set up – giant stages, tents, rides – in the big open field that covers the hill at the park. It looked cool – but I don’t have the cash for admission so I rode on.

Finally, a little north of the festival (but close enough that I could still hear amplified music booming in the distance, I took a break at a picnic table along the trail. I had almost a gallon of iced water in a soft cooler attached to the CrossRack on the back of my Xootr Swift. I’ve found that carrying cold water like that makes riding in the Texas heat bearable and I wanted to get a jump on the season.

The spot was really nice. Even though it is in the middle of a giant tony Texas suburb, with miles of massive brick homes cheek-to jowl sprinkled with gas stations and chain restaurants… all this was hidden behind the riparian forest that followed Rowlett Creek and its tributaries. All I could see was my little strip of smooth concrete, a large expanse of tallgrass pasture (hopefully, they are trying to recreate a habitat that once covered the entire center of the country) and bordered by the thick bottomland woods.

Next to the table was a tilted sign – a historical marker. Protected by plexiglass was a big poster outlining a terrible event – the Muncey Massacre – that had occurred near the spot a long time ago. I read it, took a photo of it, and typed it out here for you to read – save you a trip out onto the trail.

It wasn’t hard to imagine the wildness and hardships of that time. Even with the music reverberating in the background.

The promise of free land offered by the Republic of Texas for the purpose of colonizing the unappropriated lands of the Republic resulted in conflicts with American Indians due to encroachement on their way of life.

The first Anglo-American settler in the Plano area is believed to have been Mr. McBain Jameson, who received his conditional certificate (land grant) from the Republic of Texas on January 2, 1840. The next family to settle in the area was that of Jeremiah Muncey, his wife and four children. Muncey received his grant on January 3, 1842. In 1844 Jameson, an older man, settled with the Muncey family rear Rowlett Creek. The chosen site was situated near the intersection of Legacy Road and Highway 5/Avenue K today. The homestead was at the edge of the densely wooded creek bottom near a spring. The Muncey family and Jameson reportedly were living in a temporary shelter while constructing a log cabin.

According to traditional accounts, in the fall of 1844, Leonard Searcy, his son, William Rice and his son went on a hunting trip down Rowlett Creek. They set up camp about ten miles from their home, near the Muncey homestead. The next morning, when Leonard Searcy went in search of the Muncey family, “…he discovered a heartrending sight.”

Mr. and Mrs. Muncey, their young child, and Jameson had been murdered. The three Muncey boys were gone. It was later discovered that the 15-year-old had gone to another settlement for provisions, but the 17- and 12-year old boys appeared to have been taken captive.

There was evidence the attack had occurred that morning, only a few hours before Searcy’s arrival. Believing the perpetrators might still be near, Searcy quickly returned to camp to warn the others. When he arrived, only the elder Rice was at the camp, as their two sons had ridden off to hunt. The two fathers immediately went searching for them and soon found the body of Mr. Rice’s son. They loaded his body onto a horse and with no sign of young Searcy, rode the ten miles home. They arrived to find Searcy’s son already home. The young Searcy had been with Rice’s son when they were attacked and told them the story of his narrow escape.

A party of men was gathered to pursue the suspects who “traveled fast and were not overtaken.” The two missing Muncey boys were never heard from again, but remains believed to be that of the boys were later found on the “flats” along the retreating trail. The true identity of the assailants was never known. Oral history attributes the attack to American Indians on the basis of young Searcy’s account of the death of the Rice boy. Such a confrontation would not have been unexpected, for the incoming Anglo settlers were taking away the homeland of the American Indians and threatening their very existence. Nevertheless, we will never know the true story of who was actually involved, for the telling of the story from generation to generation has likely introduced assumptions and biases that do not reflect the original event.

The Muncey incident, however, had no impact on the continuing influx of settlers, for Texas became a state in 1845 and Collin County was established the following year. Reputedly the Muncey confrontation was the last violent episode between settlers and American Indians in this area. Nevertheless, as one account noted “it…struck cold fear into the hearts of the early settlers and they lived with this fear for years to come.”

Produced by The Plano Conservancy for Historic Preservation, Inc.
Funded by a grant for the City of Plano Heritage Commission. 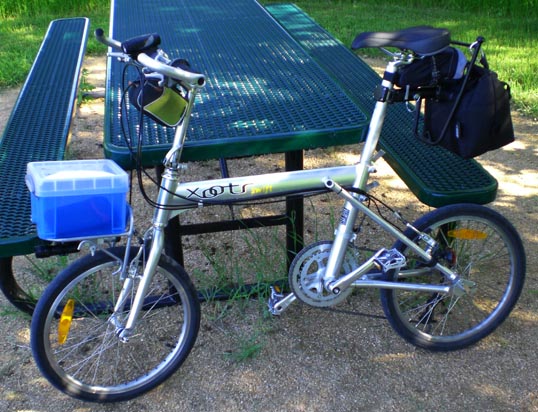 My Xootr Swift along the trail near the site of the Muncey Massacre, Plano, Texas.

The view of trail, meadow, and trees. You would never know you were in the middle of a gigantic city. The historical information was in the sign my bike is leaning against. Plano, Texas.