The horrible heat that has gripped North Texas for months now finally broke this week. My intention is to, for as long as the weather is bearable, try to go for a bike ride every day- or at least as often as possible.

On Saturday, the weather was nice and I had a little time to spare in the morning. I thought for a bit, and decided to drive my car with my bike in the trunk up to one of my favorite spots, Bob Woodruff Park in Plano and go for a ride. I parked at the south part of the park, put my bicycle together, did a little light maintenance, and took off.

That section of the park, south of Park Boulevard, is a beautiful grove of thick trees nestled in a curve of creekbed. I have enjoyed going there for decades – something about the dappled light coming down through the branches is so relaxing….

I love this spot in Plano's Bob Woodruff Park - a perfect grove of trees.

One time, years ago, I wrote about the place:

There are few things as beautiful as dappled sunlight meandering down through a grove of trees.

I simply couldn’t take it any more today and had to get away, so after hitting the old todo list as hard as I could from seven to eleven I took half a day of vacation and booted out of work. I drove to a park and found a little nook in the creeky woods to spread a blanket for awhile. The weather was perfect, a cloudy morning burning away to a sunny afternoon.

The illusion of being out of the city was alarming and wonderful. Despite being smack-dab in the middle of the booming northern suburbs I barely saw a soul, heard almost no sound. I ate some fruit; the pinapple was the best I’ve ever tasted.

A woodpecker rat-a-tat-tatted overhead. One oak amazed me with its huge size. It must be almost two hundred years old.

There are few things as beautiful as dappled sunlight meandering down through a grove of trees.

I checked the date… October 15, 1998 – almost thirteen years ago. It seemed warm that day, hard to believe it was October. The grove of trees hasn’t changed, though. Today it was a lot more crowded – everyone is out and about in the sudden, surprising nice weather. 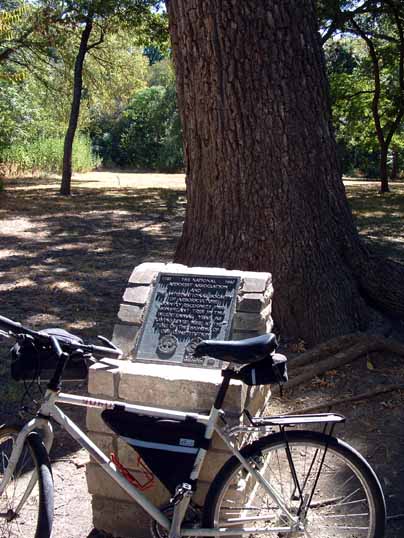 The plaque at the base of the Plano Bicentennial Burr Oak.

There are some big trees there. One is the Plano Bicentennial Oak (renamed  the Plano Quincentennial Bur Oak – it was older than they thought). It has a plaque mounted on a concrete stand that says:

The National Arborist Association and the international society of arboriculture jointly recognize this significant tree in this bicentennial year as having lived here at the time of the signing of our constitution.

I could have hung out in the dappled sunlight all day – but I wanted some exercise, so I pedalled out. From looking at Google maps I had seen that a whole new park had been added to the north of Bob Woodruff – it was called the Oak Point Park and Nature Preserve and it has a complex of concrete trails webbed across it.

The new park was a blast. I spent the rest of the morning exploring and trying to cover all the trails, even the Santa Fe trail that branched out into the neighborhoods to the west.

What surprised me was that there were some hills to ride up. In the northern corners of the park trails branched out and coursed up some hills. I had forgotten how much I enjoyed riding hills – the burning legs, thumping heart, and empty lungs – it reminds you that you are alive.

From this picture you would think I was out in the country somewhere, cruising the Great Plains, rather than in the heart of the urban, tony suburb of Plano, Texas. Look how dry the grass is... you can see how the fires in Texas are happening. Most of the trail winds around the ponds and creek bottom woods in the background.

The weather was nice, though the drought has left the lakes drying up, the trees stressed, and the grass as yellow as hay. There were a lot of people out – couples, families, a couple of crowds that looked like whole neighborhoods. Everyone was friendly, everyone said Hi as they passed on the trail.

The entrance to Oak Point Nature Preserve on the North Side. This is actually at the top of a little hill.

I rode almost twelve miles on the trails and visited most of the area.