As I look around this interweb thing at other people riding bicycles I see things such as a beautiful multiple day tour along the Danube, an afternoon on the streets of Paris, or a civilized ride through Napa valley, complete with wine and gourmet food.

Here’s a cool trailer for a documentary about a bunch of elite skilled mountain bikers in the most amazing isolated places you have ever seen. It’s not about me.

But I don’t live along the Danube, in Paris or in Napa Valley. I live in Dallas, Texas. I ride through horrible baking heat underneath high tension wires.

As the cities of North Texas struggle to backfill their infrastructure with transit options they have to do what they can with what they’ve got. One thing that has proved useful are abandoned rail lines – made in into rail transit corridors or rails-to-trails conversions. Another, less glamorous lemonade-from-lemons option is the open space beneath the high tension power lines.

These lines contain rare and precious undeveloped land underneath their buzzing clusters of wires strung between tower steel transmission towers. Because of the enormous voltage carried on these lines, there can be nothing underneath – no houses, trees, or even scrub – only bare grass with an occasional road sneaking across. In theory this makes a perfect path for a new bicycle trail – all you have to do is pour a wide sidewalk snaking back and fourth along the right of way.

The only problem is that it is aesthetically awful. Bare grass, towering gantries of metal, and buzzing wires bursting with voltage… and nothing else. No beautiful meandering rivers, bustling city centers, or impressive distant views – only the wavy mirage of heat waves rising from bare concrete baking in the Texas sun.

What it does offer is mileage. These trails can go on for a long way, crossing huge swaths of dense city. Riding one of these trails gives the illusion of isolation – you forget you are in a hornet’s nest of millions of people – because you barely see anyone other than another rider every now and then. Even the suburban developments that line the right of way have high wooden privacy fences and appear from the trail as a long, ragged, wood stockade.

I rode a long way, though I didn’t exhaust the possible mileage in the long intersecting Plano trail system. Maybe another day… maybe when it isn’t as hot. Don’t think I’ll miss anything in the meantime.

The trail winds beneath the giant towers 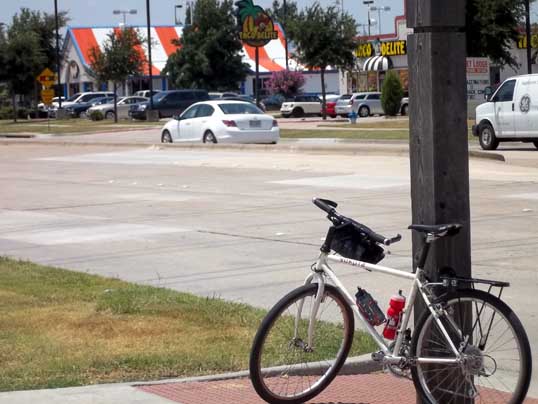 When you fall into the illusion that you are isolated in the middle of a bustling city, you come across an oasis of civilization – a busy cross street, a Whataburger, a Taco Delite

A rare and welcome amenity is a shady bench where I can sip some water and read a bit on my Kindle – I carry that in my handlebar bag.