I had to take Nick to the airport and took a look at Google Maps for a bicycle trail in the area. I only recently learned of the “Bicycle” option on the maps – where any bike routes or trails show up as bright green lines. It makes it easy to spot good places to ride.

I was attracted to a long stretch of green along the eastern border of Irving. Looking closely I saw that it was the Campion Trail. The city wants to eventually hook it all up together into a twenty-mile long system, but for now the north and south sections are unconnected. The northern arm looked to be the longest – running from Las Colinas up past Interstate 635 into Valley Ranch – so I picked a parking area along Riverside Drive – Bird’s Fort Trail Park, and drove there after dropping Nick off.

It had been raining all afternoon, but as I pulled into the parking lot, it tapered to a stop and the sun peeked out from behind the clouds. I put everything together and began to ride. My idea was to go south and visit the two miles or so of trail that went that-a-way, and if the weather held and I felt good I’d then cross back past my car and explore to the north.

The Campion trail is really, really nice. It’s almost brand spankin’ new – miles of smooth, wide concrete with few road crosses and it’s flat as a pancake. I had it almost to myself as I started but as it became obvious that the rain had finished more riders, runners, and families on an evening stroll came out to enjoy the trail and the string of parks it connects.

The only difficulty was water over the trail underneath Northwest Highway. As I approached I saw bicycle tracks in the silt under the water so I forged on in, thinking it was only a few inches deep. It turned out to be about two feet – so I got plenty wet – but was able to force the mountain bike on through without much trouble.

I ended up riding almost the whole trail out and back – skipping only the very last part that winds through the urban areas of Valley Ranch. It was a really nice ride – easy, with a varied landscape. A lot of the trail is through the heavily wooded Trinity River Bottoms, and the various canals, lakes, and ponds of the Las Colinas Area, but there is also some really nice residential areas along the way and the giant concrete mountains of the Interstate 635 and President George Bush Turnpike interchanges.

I rode until the sun started setting. I thought I’d gone about ten miles or so, but my gmap pedometer route shows a tad over twelve.

I’d like to go back, but it sure is a long drive from where I live. There are some side trails and routes I’d like to check out. I’d like to try the South Section of the Campion Trail too. Maybe some day.

You have to keep an eye out for the tasteful and subtle trail markers for the Campion Trail or you will miss them. They are obviously designed to be unobtrusive and to blend into the natural setting.

All along the trail are little paved side trails leading to “River Viewing” areas. There are comfortable benches where you can sit and enjoy the crystal waters of the Trinity River as it roils and burbles down its rocky bed on the way to the sea. As you watch every now and then a Styrofoam cup will float by for your entertainment. If you are lucky, you might get to spot a murder victim’s body. 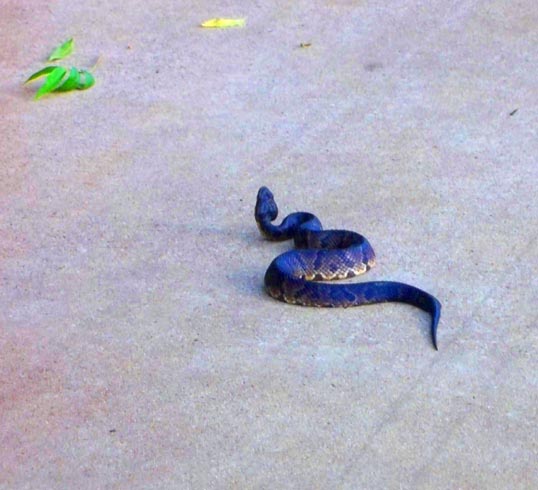 Especially after a rain, friendly woodland creatures emerge from the thick river bottom woods to greet you along the concrete trail. 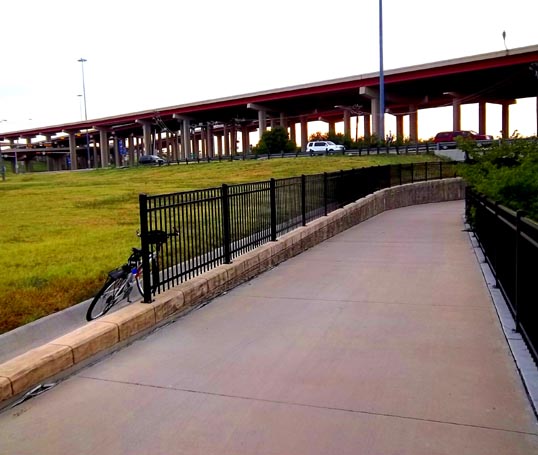 The natural landscape is enhanced by the sight of the massive flyovers from the interchange of Interstate Highway 635 and the President George Bush Toll Road. 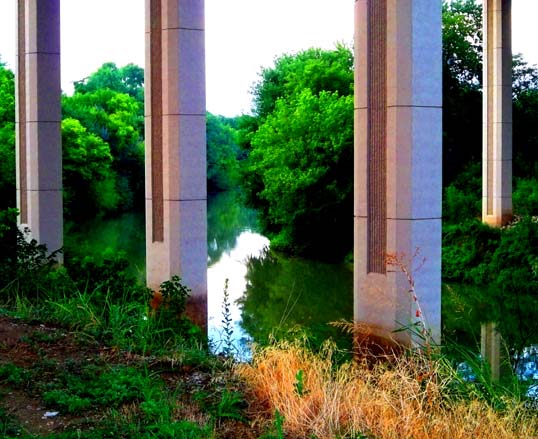