I have been working hard, riding my bicycle every day. I’m out of shape and too big and too old, but still I try.

One helpful thing is that I have done this before. I was a lot younger then, which makes it a lot harder now, but I know it can be done because it has been.

When I first moved to Dallas I was young and full of pee and vinegar, but I began to give in to my slothful and dissipative nature and started eating out too much and lounging around watching too much television. So I fixed my bike up and started to go our riding on a regular basis… at least four times a week. Now there are bicycle trails everywhere, but back then, in the early eighties, there was only one in Dallas, the White Rock Lake Trail. When I started, I lived on Lower Greenville… then I moved a little north to Lover’s Lane and Northwest Highway – and both gave access to White Rock Lake.

I remember the first few times I rode – I couldn’t make it all the way around. This can be problematic, because once you are on the other side of the lake, you have no choice but to ride back. Again, I was young then and the mileage started to increase quickly and before long, around I would go (it’s about nine miles around the lake).

Two memories stand out from those early circuits. Once, I was plugging up an uphill spot when a young woman passed me, standing on her pedals, and shot up the same hill like it wasn’t there. I thought this was the most beautiful thing I had seen – her power, her technique. It wasn’t long though, before I could do the same thing – without even thinking about it. That was a moment of pride.

One problem with riding back then was that it was a nice little downhill jaunt to get to the lake. That meant the last part of my ride, from the lake to my apartment was uphill. I had to be careful and make sure I had enough energy left to get up the hill. One day I miscalculated and had to use up every last bit of willpower I had to get back home. The problem was, I lived in a second story apartment, and there was no way I could make it up the stairs, especially carrying my bike. I had to lie down in the yard, next to my bicycle, for almost an hour, until I was rested enough to trudge up the stairs. I was surprised that nobody came out to see what was wrong with me (not that the people there were helpful – they were very nosy).

So now I’m at it again. The other day I made a list of the rides I wanted to do over my few days off around the fourth, and one was a circumnavigation of White Rock Lake – something I hadn’t done in decades. It brought back a lot of memories, mostly of when I was starting out. I’m riding an inefficient mountain bike, so it is good exercise. I carry plenty of water and my Kindle, and stop whenever I feel like it to read a few pages.

That’s a good time for me. Riding my bike in a nice spot, with memories flooding back, and stopping in bits of shade now and then… reading a bit, riding a bit. It doesn’t get much better than that.

My old Raleigh is hanging out in the garage. Maybe I’ll work on it, see if I can bring it back to life. It’s old, but it’s light and might still go faster and easier than my mountain bike. We’ll see.

I may be old, but I’ve done it before.

Where I started. I think this is the “runners’ lot” – the “cyclists’ lot” is a bit farther down the road. So sue me.

Near the north end of the lake there is a long pedestrian/bike bridge they built to get across an arm of the lake. Back in the day we had to ride on a narrow sidewalk along Mockingbird Lane – a very busy road. If someone was coming the other way… you could pass, but with no more than an inch to spare. It was frightening.

I stopped and visited with the folks at White Rock Paddle Company. I think I’ll go back there soon and rent a canoe. There’s some swampy backwaters I want to explore. It looks like fun.

The old art-deco bath house is now the Bath House Cultural Center and it has a nice sculpture and butterfly garden out front. It’s one of my favorite spots around the lake so I stopped there and read a couple short stories on my Kindle. 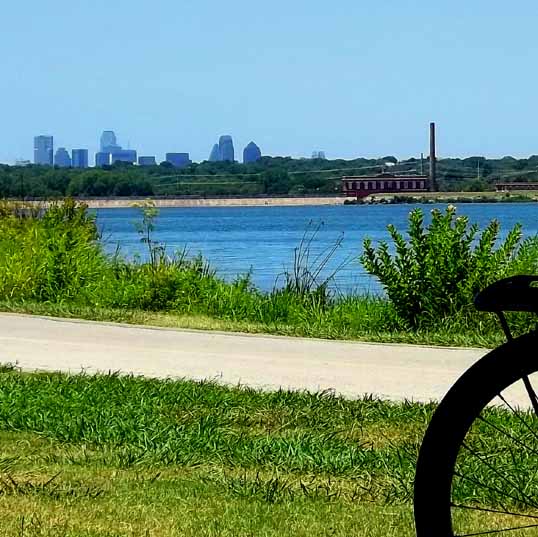 A view of the dam across the lake with the towers of Downtown Dallas poking up in the background. 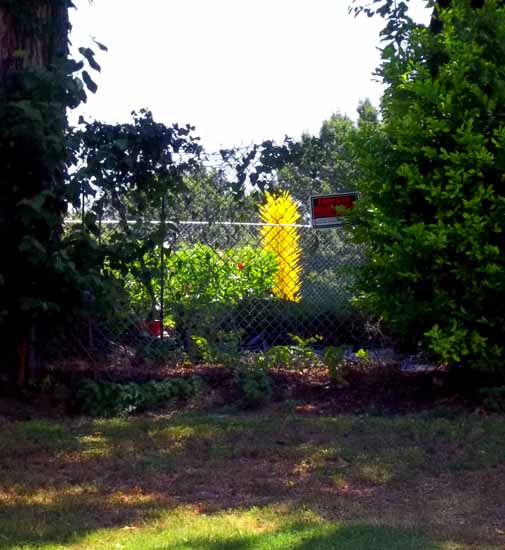 The trail runs between the lake and the Dallas Arboretum. Here’s a bit of Chihuly visible through the trees. That sculpture is about thirty feet tall and is called “Yellow Icicle Tower.” I took a picture of it at night here. 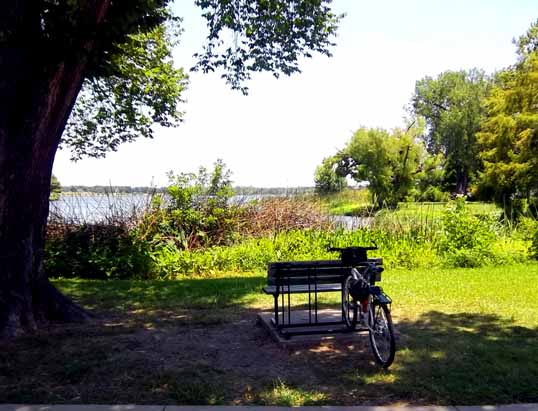 This bench is one of my favorite spots on the West side of the lake. It’s a quiet shady spot. I remember sitting here years ago, taking it easy, though the area looked different back then. The plaque on the bench said that it was dedicated in 1998, so I must have sat there when it was new. These benches have bicycle racks built in to them, a very useful design.