I have been suffering from a terrible case of writer’s block and have been spending too much time staring at a blank screen, waiting in vain for some sort of a useful idea to come bubbling up from… well, from wherever useful ideas bubble up from. Of course, the staring doesn’t last very long until it is replaced by silly web-surfing. You know how that goes.

So I was wasting time by GoogleMap StreetViewing (I’m no fan of the current fashion of converting tech nouns into verbs, such as in the phrase of “Netflixing through Mad Men,” but this is what life is in this best of all possible worlds with) places that I used to live and I came up with this shot: 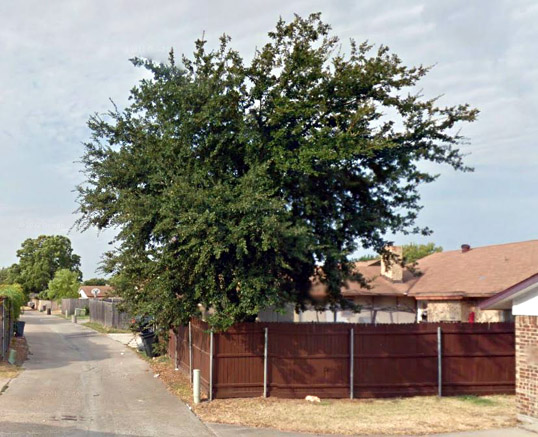 Live Oak in back of the house I used to live in.

First, it’s interesting that in my old neighborhood they even have GoogleMaps StreetView in the alley. Let that sink in for a minute. Not only did the Google car drive down the street taking photos willy-nilly to post for all to see, but then it proceeded to creep down the alley in back of the houses, doing the same thing. The alleys there were extra-wide (the kids used to cone them off at the end of the block and play roller hockey on the concrete) but… just sayin’.

What I thought was cool is that tree there. The big one in the corner of what used to be my yard.

My son Nick (now in his final classes at Duke University) was a toddler. He was born in East Dallas, a few miles north of this spot, and we moved before our second son, Lee (now a financial analyst in New Orleans) was born eighteen months later. I’m pretty sure the tree was planted before Lee was born, so Nick would have been about a year old.

I took Nick down to the Dallas Arboreteum for a Saturday afternoon. When we arrived, I discovered they were giving out free trees. I picked up a Live Oak planted in a recycled coffee can and brought it home, intending to plant it in the yard of our then-new-to-us home.

It looked substantial in the can, but after digging the hole and getting rid of the container the tree was only about an inch and a half high. It was dwarfed by the weeds that surrounded it. Everybody thought it was ridiculous and that I was an idiot for planting such a tiny sprig.

Still, despite the ridicule (probably because of the ridicule) I stuck it out. I carefully marked out the area around the twig to make sure it wasn’t mowed over or trampled upon. I watered it faithfully and tended it as best I could.

And, wonder of wonders, it grew. Fast. It grew like a weed. I talked to a friend that is a landscape architect and he said, “The smaller a tree is when you plant it, the bigger it will be in ten years.” Something that small doesn’t suffer the shock of transplantation, which sets a tree way back.

A few years later, it was already as high as my head. Putting in a new fence, the wind caught a panel and yanked it out of my hands. It landed on the tall, but still thin tree, smashing it flat. I was horrified.

I carefully raised the reedy trunk back up and staked the tree in position. I expected it to die, but, surprise, it didn’t miss a beat.

And now look at it. It’s one of the largest trees in the neighborhood. When we moved in, the block was thick with fast-growing “junk” trees – put in by the original developer to give quick green. Those have all now (mostly) succumbed to disease and are either gone or skeletal ghosts.

The sturdy oak is still growing.

I’m proud of the fact that I planted that tree (also proud that I got it for free). We moved out about ten years ago, when our kids were in Middle School. Nobody in the neighborhood knows this story, but I do, and that’s what’s important.

It’s also cool that the tree is the same age as my kids. If you have little ones – go out and plant a tree in your yard, or a park, or somewhere that needs one. The decades go by faster than you imagine is possible and a sturdy oak will rise to mark the passage of time with some welcome shade.

5 responses to “Procrastination with Google Maps”