First, let me tell a little story. It’s a story I’ve told too many times before, and if you know me, you’ve probably heard it more than once. But if I type it out here, maybe I can get it out of the way, and quit repeating myself.

When I first moved to Dallas, in 1981, I had no money (and I have no money now… how does that work?) and lived with some friends in Oak Cliff until I saved enough to get an apartment. I rode the bus down Sylvan and then across the Trinity River on Commerce into Downtown, where I worked in the Kirby Building (now converted into condominiums). The bus would go past the Belmont Hotel every day – I think it was abandoned at the time. It was a very nasty area in those years – if you stood on that corner very long you would probably get your throat cut.

I would tell people, “That Belmont property is so cool. Someone needs to buy it and fix it up. It sits up on a hill with a great view of downtown – wonderful Dallas Art Deco architecture. It’s a shame, somebody needs to do something.”

They would reply, “You are crazy. You’ll get your throat cut down there.”

Now, thirty years later, the Belmont is restored into a cute little boutique hotel, it boasts a famous restaurant, and the area around it is booming with cool hipness. I was thirty years ahead of my time… but then again, a stopped watch is right twice a day.

Thats out of the way….

Saturday the Dallas Contemporary was celebrating their thirty-fifth anniversary and they contacted Amanda Popken of Dallas Cycle Style to set up a bike ride from their location to look at a series of murals that they had commissioned/sponsored/managed in a few different spots. This looked like a lot of fun.

I decided to ride my vintage Technium instead of my commuter bike – in my constant efforts to keep the thing working I have rebuilt the rear wheel, lacing new spokes around a new hub and cassette and truing the thing – so I wanted to give it a try. I rode my bike to the train station for the ride downtown and, as always, right after I bought my ticket for the DART train at the Arapaho station, the train pulled in. You have to cross a street through a tunnel to get to the platform, so I usually miss my train and am therefore late for whatever I have planned. This time I hauled ass down the tunnel and caught it right as it was pulling out. The transit gods smiled on me that day.

There was a good bunch of bicyclists and we headed out from the Dallas Contemporary down to Commerce and across the river to the Belmont – following the bus route I remembered from thirty years ago. Along the side of the cliff up to the hotel three murals were painted. The first by Shepard Fairey (he’s best known for the Obama poster), the second by JM Rizzi, known as JMR, and the third by local artists Sour Grapes. 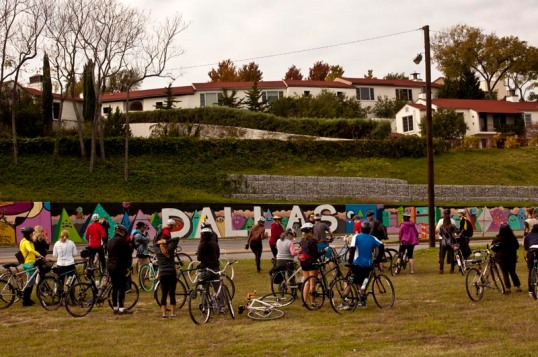 Bike tour group in front of the Belmont Hotel murals.
(click to enlarge) 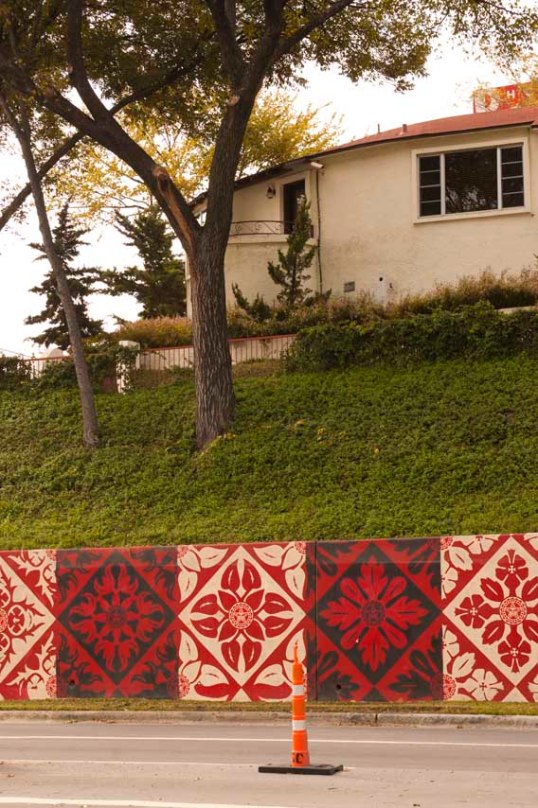 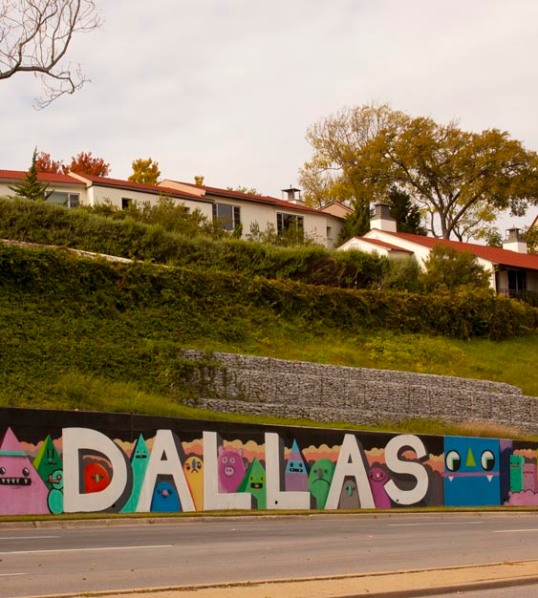 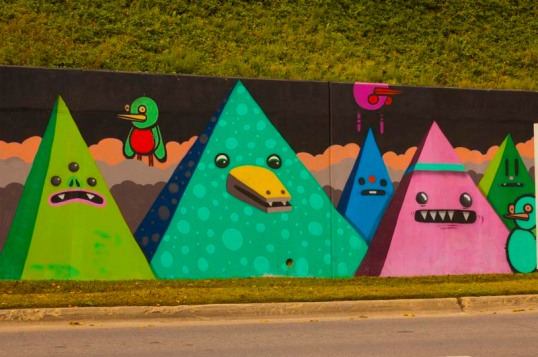 Closeup of the Sour Grapes mural at the Belmont Hotel, Dallas, Texas.
(click to enlarge)

One really cool part of the ride was that each stop had a talk by a docent – Erin Cluley from Dallas Contemporary who talked about the process of setting up the murals and getting the artists into town and working. I was particularly interested in how the out-of-town artists adapted their work to the more conservative attitudes here and what they thought of the city in general. 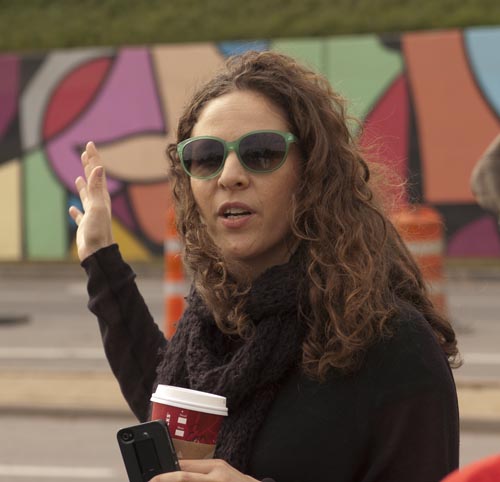 Erin Cluley, the docent giving a talk on the murals in front of the Belmont Hotel

From the Belmont, we went down the street and around the corner to Trinity Groves – a very interesting area of restaurant incubation. There were more murals by Shepard Fairey and JMR, plus some work by FAILE – a pair of Brooklyn based artists that had an amazing exhibition back at the Contemporary. 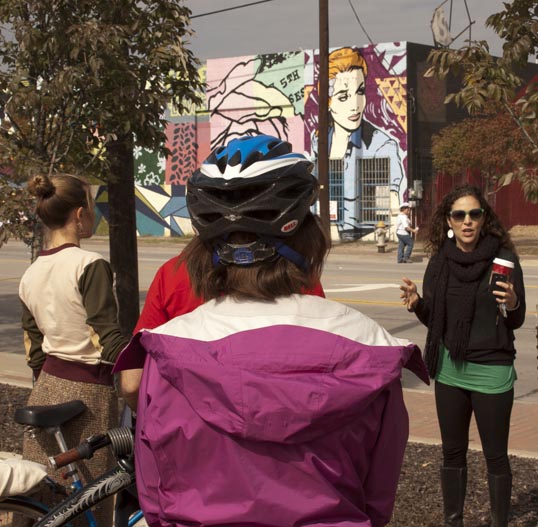 The murals from
Trinity Groves. 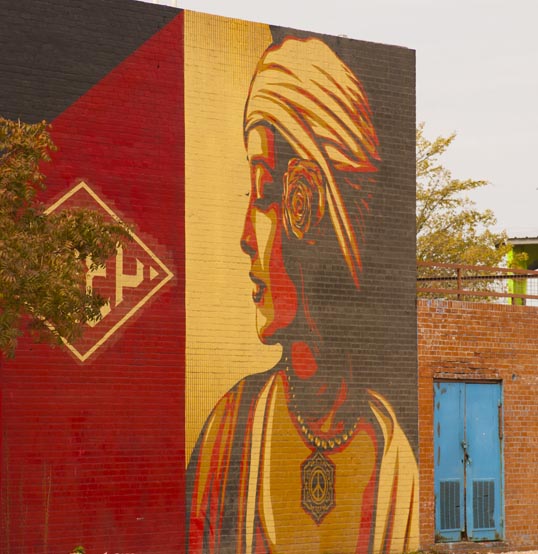 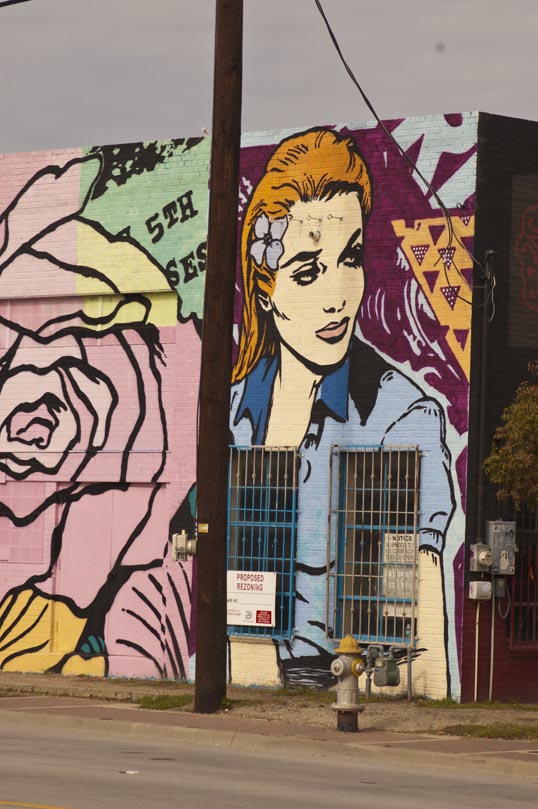 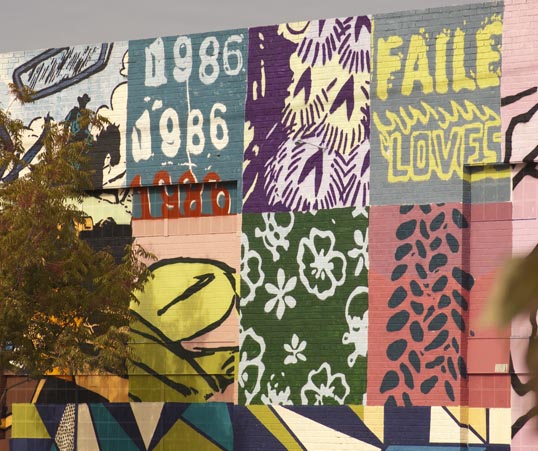 FAILE uses the year 1986 in their work – the year of the Challenger Disaster. 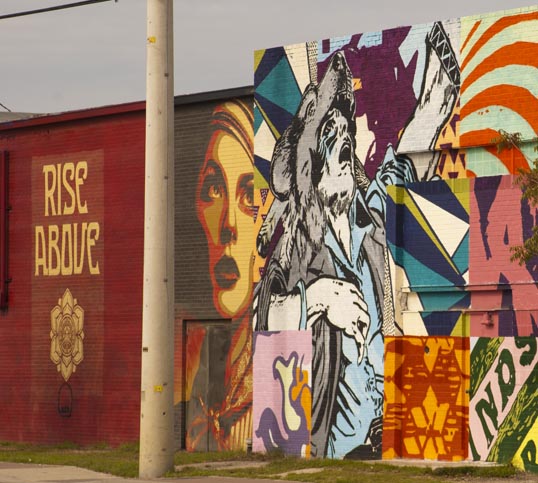 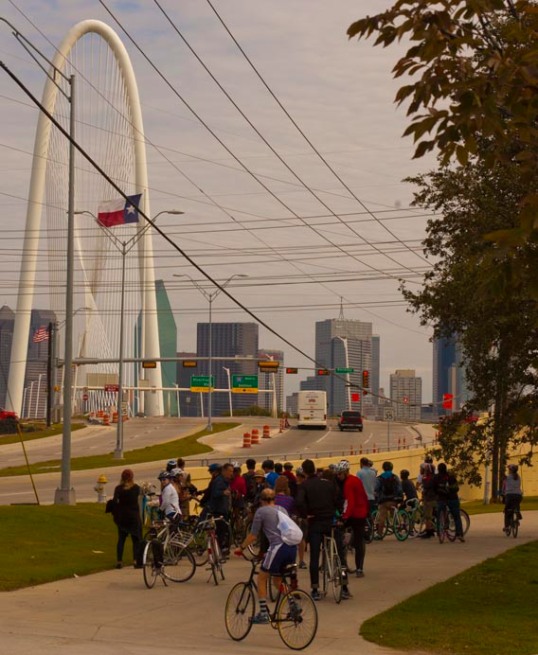 Bike tour stopping to look at a mural by JMR. The Margaret Hunt Hill Bridge and Downtown Dallas in the background.

It was time to ride back to the Contemporary, where there are murals by Fairey and JMR. 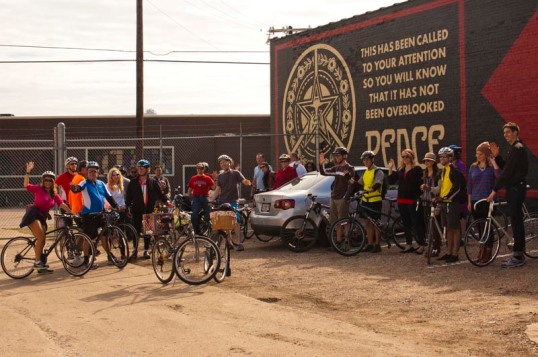 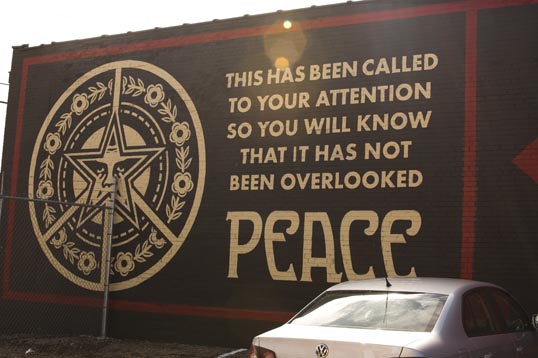 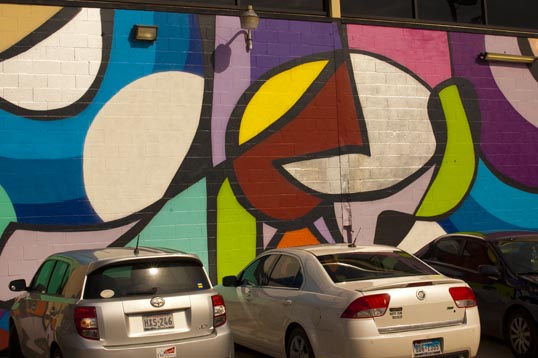 JMR mural at the Dallas Contemporary.

The ride was a lot of fun and very educational – now I’m going to be looking for murals all over the city.