Though it was fantastically hot today, I decided to go for a bicycle ride. I resurrected my Camelback hydration pack and filled a couple extra bottles with iced water and set out. I wasn’t going to go very far or too push myself too much… just get a little exercise in.

The heat was plenty hot but I felt fine and without further ado I was at the south end of the trail. The Glenville trail stops in the middle of a neighborhood – I understand the original plans were to extend the trail farther and link up with some other routes but the railroad wouldn’t grant a right-of-way. I wanted to go a bit more so I wound around on some sidewalks, crossed the railroad, and went to an alley to take a rest at the Memorial “Pocket Park” at Centennial and Grove.

I go by this little park every day on the way to work and it confuses me. It a very nice tiny park (the city says it is 0.84 acres) and has extensive landscaping and nice little curving brick walls that are the perfect height to sit on. There is a flagpole and a large bronze plaque that honors the city’s war heroes. The city must spend a lot of time and money on landscaping work to keep it looking so good.

If you look in one direction, you see the pretty little isolated park.

But the other direction is all busy street, fast food, gas stations, liquor stores.

The thing is, I never see anybody actually in the park. Nobody uses it. That isn’t surprising because there is no way to get to it. It is bordered by busy streets on two sides, with a high wall enclosing the third. No parking, no through path, no access from the neighborhood… nothing. Why did they build this? Why do they spend the money on upkeep?

Across Grove street is Woodhaven Park with a small parking area and a playground. I’m sure it is useful to the folks in the neighborhood with children. But to get to Memorial, you have to walk across at the light and then… there you are.

I guess that’s fine with me. I had the place to myself and I settled down in the shade to finish off my ice water and rest a bit, then packed up and headed home. Maybe I’ll ride there again, take my kindle and my Alphasmart with me and settle in for a while. I don’t think I’ll be disturbed. 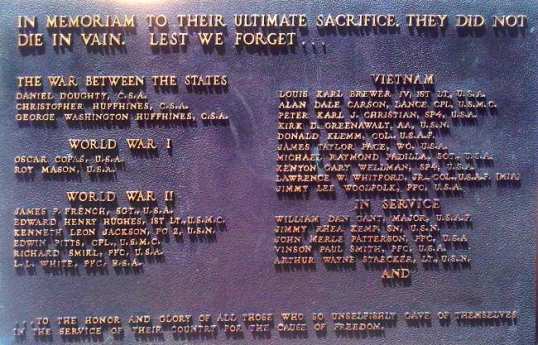 This is the bronze memorial plaque from the little park. You can see it in the picture above right in front of my bike.

If  you are not from the South, you might be a bit surprised to see the C.S.A. by the names of the Civil War heroes. If you can’t guess, that stands for Confederate States of America. The Huffhines family is very prominent in Richardson to this day. You might even be surprised to see that it isn’t even called “The Civil War” but “The War Between the States.” Welcome to Texas.

As I was sitting there thinking I realized that the route I had chosen was on my way to work and I had ridden more than halfway. Can I ride my bike to work?

The route past that point is more treacherous – there are no trails and at rush hour there will be a lot of traffic. There is one spot on Buckingham Road that curves through a wooded area with no sidewalks – I’ve always been afraid of that spot – it would be dangerous for a slow bike rider like me. But maybe I can find a different route. There are some alleys and a new development to the north… let me see.

What would it take to be a bicycle commuter? I threw away the rack for my bike years ago, I should get a new one to hold a change of clothes. I could get a light for the winter time. Other than that… If I could work on it a bit, improve my fitness, lose some weight… I could get to work on a bike almost as fast as I can in a car.

It’s funny, I don’t live very far from work… maybe six miles. But the thought of being able to ride to work two or three days a week – it sounds to me like climbing Everest or getting Hannibal’s elephants over the Alps.

My route today… only 5 and a half miles, but a nice way to get out of the house.