I had great plans for the weekend. I even wrote them down – a two page list in one of my Staples Bagasse Composition Books I carry with me always. Two pages! Who the hell am I kidding?

Well, of the projects I wanted to complete, I finished… hmmm… let me count… none.

On Sunday, around noon or so, I was trying to decide whether to go to the library and write (I have a certain table at the Richardson Library I like to work at – the library is open from two to six, which is a nice constrained four hour writing time – it’s shocking how fast the time flies) or to go for a bicycle ride. I decided to kill two birds with one stone and ride my bike to the library. 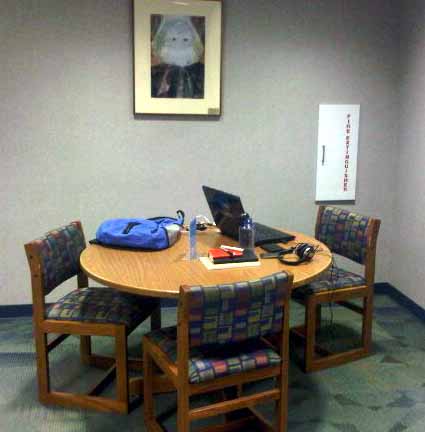 My favorite table at the Richardson Library.

I made my preparations – packing my Alphasmart Neo (don’t want to ride my bike with my laptop), pens, notebooks, water bottles, clean shirt, towel, and such and sundry stuffins. I put my backpack on and went out into the blast furnace of the garage to get my bike. The front tire was flat.

I stood out in the sun behind the house, found the telltale little white spot where the thorn had penetrated, took everything apart (nasty little thorn, really), patched the tube, put it together, and pumped everything back up.

Maybe a half an hour. I was drenched in sweat.

I had calculated that I would be able to get to the library in the awful heat by moving quickly. The time I spent fixing the tire was too much, though. I rode about a mile and decided it was too risky. The temperature, the sun beating down, the still air… it was all going toxic. By the time I made it home I was beginning to get a little dizzy.

I am too old and way too out of shape for this. All I wanted to do was veg out in a dark cave of conditioned air. The bit of overheated exertion wore me to the bone. At that point I wasn’t even up to driving to the library. I rested a bit, went to eat with the family, and at sunset walked down to Lee’s last softball game. Once the sun is down, it’s a lot more bearable. I think the solar radiation beating down is worse than the superheated air.

I’ve complained about the heat already. And it wasn’t even bad back then, not like now. It’s always hot here in the summer, of course, but this is getting ridiculous. It wears everyone out – it is so hard to get anything done.

Deadlier than the Male

The only thing I accomplished was to read another bit of Pulp Fiction I had queued up. This one was Deadlier than the Male, by James Gunn. No, this isn’t James Gunn, the science fiction professor that teaches at my alma mater (yes, I took a class from him, but that’s a whole ‘nother story). This James Gunn seems to have not written another novel. Nobody seems to know anything about him. The book was made into a film in 1947 called Born to Kill – which I’ll try to find. 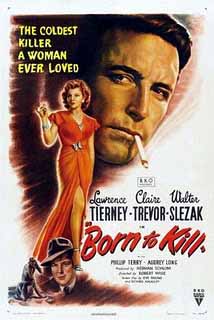 It’s an odd, crazy book. I wouldn’t say it was a good book, but it was something. The language is simple, but arresting. The first line – ”Helen Brent had the best-looking legs at the inquest,” pretty much sets the scene. Most noir pulps have a small number of characters, but in this one, every chapter introduces somebody new. They keep arriving faster than they are killed off… until near the end. With each fresh character the story splits until the plot is like a big twisted knot of desperation and evil, stretching from Fresno to Frisco. I had a bit of trouble keeping track of who was who, and a few of the participants seem to simply disappear from the book once their utility wears thin, but the book was short and the story tumbled forward picking up flotsam and jetsam from the sewer of human malice until it all crashed down into the last few pages.

Since I wasn’t up for anything useful I was able to get through the book in one day. Now, I have some more pulp noir stuff in my reading list, but I need to find something different, maybe even something a little uplifting. After reading this one… I feel sort of dirty.