“Even bad coffee is better than no coffee at all.”
― David Lynch

I had a tough winter – my allergies, despite my best efforts, knocked me out. The worst part of it was I have not been able to ride my bike as much as I wanted to and have lost a lot of fitness. So now I’m working on the long road back.

One thing that I have found is that I especially enjoy riding my bike if I have a destination. It’s no good to always be riding to a store or a restaurant or a brewery… so sometimes I create my own destination. For the three day holiday weekend I decided to get up as early as I can (which is not always particularly early), pack up what I need, and then ride out to some spot where I can stop for coffee, breakfast, read my Kindle, and maybe write a bit. I decided to ride my Xootr Swift folding bike – it is perfect for short rides.

I didn’t plan on riding very far, maybe five miles or so around the ‘hood, the weather is already getting hot, the wind hard from the south – but otherwise it was a beautiful day.

The only problem with this plan is the amount of stuff that I have to put together for such a simple thing.

And it goes on and on. It took a long time to get everything ready… too long… and I forgot some things. So now, I make a checklist, make a pack with what I can put some stuff together ahead of time. The best part, though, is to plan where I’m going tomorrow morning. 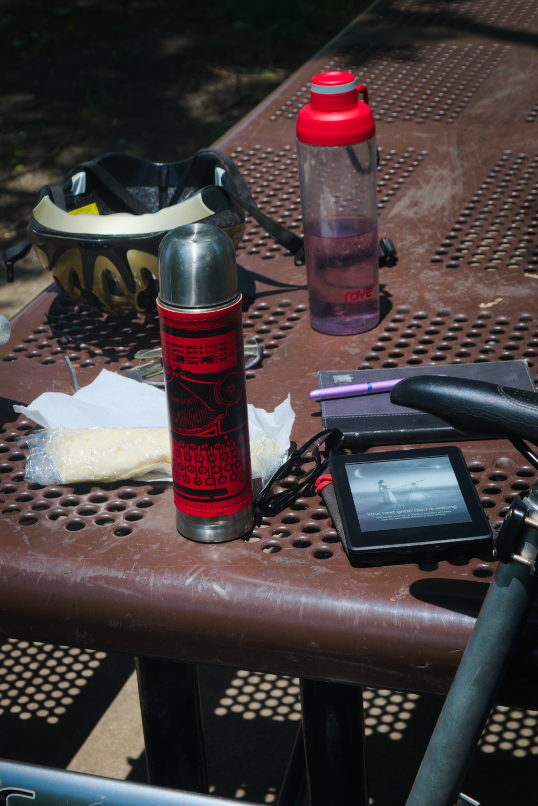 Stuff on a picnic table in Huffhines Park, Richardson Texas.

“People are like stained-glass windows. They sparkle and shine when the sun is out, but when the darkness sets in, their true beauty is revealed only if there is a light from within.”
― Elisabeth Kübler-Ross

I was driving up to McKinney for a photowalk, taking the route up the eastern side of the city. There were a couple of interesting looking taquerias, a line of small-time used-car dealers, and some place, little more than a shack, with a peeling sign that read:

Now, I know about a weekend fishing trip and how those things go together… this is Texas… but still….

Everybody had so much fun at the Seersucker Bicycle Ride and Picnic the other day. There was a lot of photography going on – such great shots. One discussion was about the relative advantages of taking the regular posed shot versus the technique of staying still and waiting for the photograph to come to you.

Amanda Popken of Dallas Cycle Style had brought a couple of kites on her bicycle. I stayed in one place while she ran past, trailing a kite behind her. 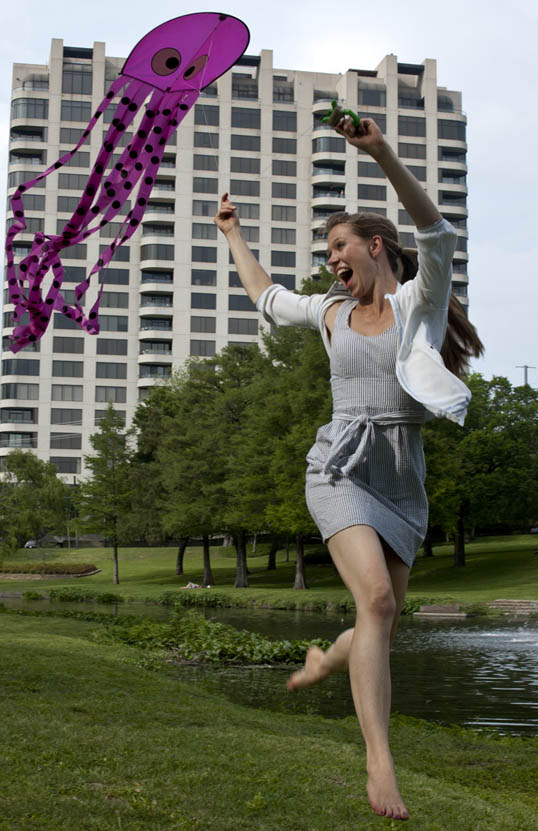 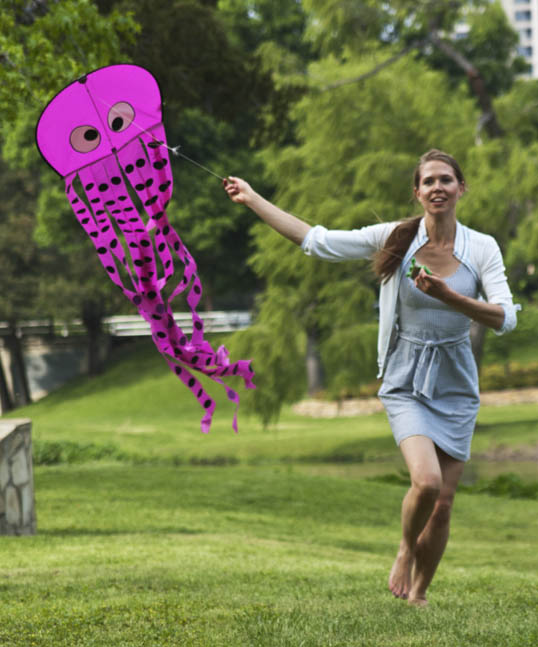 A tradition in Dallas in the bicycling community is the fall/winter Tweed Ride. Last December’s ride was a lot of fun, though bitterly cold. As a bookend to that ride, the great folks at Dallas Cycle Style organized a springtime/warm weather ride, and called it the Seersucker Ride. It looked like a blast.

But I needed something seersucker to wear. I am the most fashion-challenged person in the world – but I knew what seersucker is. The only reason I knew was because once, a few years back, I had actually looked it up after seeing this scene in Sophie’s Choice.

Right now we are as broke as broke can be, so I couldn’t spend any money on clothes. Also, I futzed and dutzed, as always, around and waited too long – so ebay was out of the question. I did a circuit of the various thrift stores and actually found some seersucker (mostly pants) here and there – but none of it came even close to fitting me. It appears that only undernourished men wear seersucker.

So I was left with a journey into the heart of the beast. I actually went to a mall. Other than a trip to NorthPark for the Nasher Exchange Sculpture (and I wasn’t going to buy anything) I haven’t been inside a mall in decades. Collin Creek Mall is only a tiny jump up the freeway from where I live. I remember driving there from Oak Cliff in 1981 when it first opened – it seemed like driving forever – and how shiny, lavish, and sumptuous the enormous multi-lobed two story shopping extravaganza seemed – like a brave new world. Now, not that long later, the mall is on its last legs, barely hanging on for dear life, coasting on past glories. To walk the corridors is borderline depressing.

I found a shirt that was seersucker-like on a clearance rack for four dollars. The only open checkout was in the shoe department where I had to wait behind a woman trying to get a discount because the pair she was looking at had a tiny blemish.

“Look on my works, ye Mighty, and despair! Nothing beside remains. Round the decay Of that colossal wreck, boundless and bare The lone and level sands stretch far away.”
—-Shelley

So I had my seersucker. On Saturday morning I packed my Xootr Swift bicycle with food, drink, and a blanket, put a fresh battery in my camera, and rode the DART train downtown to meet everyone at Klyde Warren Park.

My Xootr Swift bike with picnic supplies loaded in the pannier.

The park was a hive of activity – S.E. Hinton was on her way to grace the presence of the Dallas Reads One Book celebration of The Outsiders. They gave us all paperback copies and took photos of everyone in period outfits reading the tome. We would like to have seen the author (and seen the movie they would show later) but we had a picnic to do so we all rode off across Uptown to Lee Park.

It was a beautiful spot – along Turtle Creek with a fountain in the center and a wave of purple/pink Azaleas blooming across the water. We parked the bikes, spread out the blankets, and unloaded the vittles – a veritable moveable feast. A volunteer had driven in to deliver items too bulky to bike – coolers of ice, extra water, a croquet set. Not content with pitiful portable picnic players, he brought in a generator, amp, and speakers and we had vintage music all proper – angel trumpets and devil trombones. 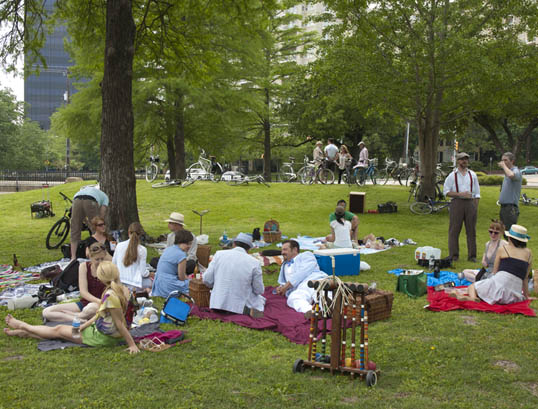 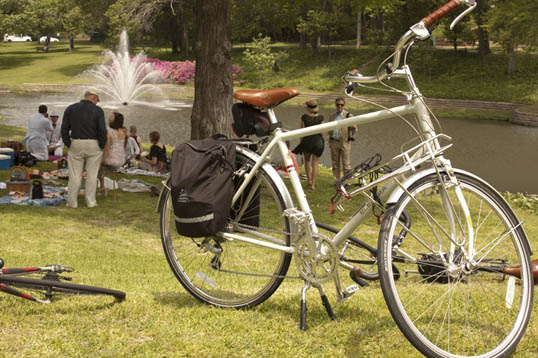 Such a great day. The weather was warm with a bit of a breeze. A beautiful park with a lot of cool people. There is something about wearing silly clothing and riding together through a big city on ridiculous bicycles that is relaxing and disarming. Such fun.

There were a lot of photos taken – I tried not to spend too much time shooting, but everything and everybody around was too freakishly photogenic to resist. I have a nice collection I’ll post here for journal entries over the next few days.

All good things must come to an end and we packed up and headed out. Three of us rode back downtown, cutting west on the Katy Trail which ends at the American Airlines Center. As we passed next to the building the Dallas Mavericks basketball playoff game ended, spilling an enormous throng of blue-T shirted fans out all around us – flowing like a rabid river as we worked our way through on our bicycles. It was surreal.

Luckily, the home team had won on a last second three point shot right before we arrived, so everyone was in a great mood. Everyone was yelling, “Vince Carter!, Vince Carter!”

It wouldn’t have been any fun to ride through that crowd if the home team had lost.

I rode back to Klyde Warren Park and rested for a bit. I knew the trains would be full of Maverick fans on their way home, plus I needed to decompress for a few minutes. Next to me a young couple sat playing chess – she was much better, but he liked to win, so he kept buying her wine until he prevailed. The inflatable movie screen for the showing of The Outsiders went up – but I didn’t want to stay downtown that long after dark, so I caught my train and went home.

Last Sunday I met some friends for a nice bike ride to the Jazz Age Sunday Social at Dallas Heritage Village. We packed picnic lunches on our bikes and it was a glorious day to sit around and relax.

The point of the event was to dress up in costumes from the roaring twenties (with various degrees of success) and dance to tunes of the time. I enjoyed the music a lot – there is something about a live band…. The first group – The Singapore Slingers were an especial bunch of fun. 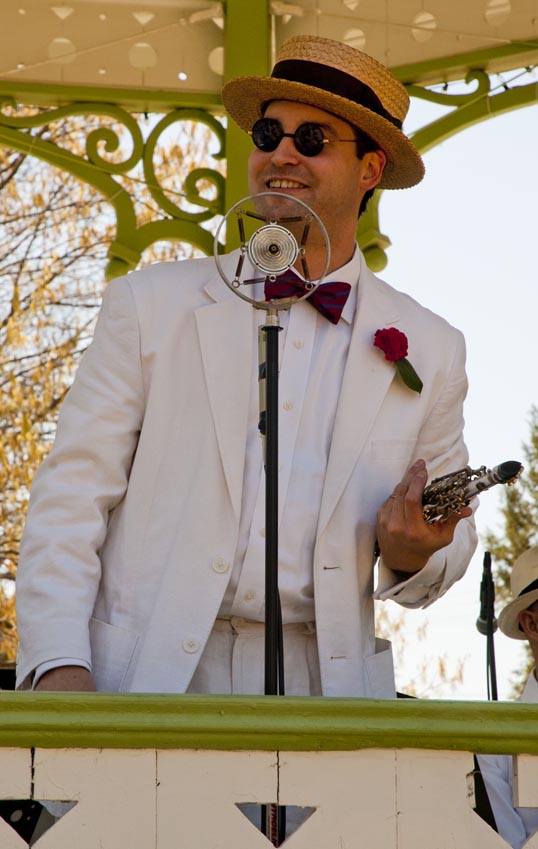 A lot of people don’t realize this Elvis Song Are You Lonesome To-Night was written in 1926.