A year ago, for the month of June, I wrote about an online short story each day for the month. It seemed like a good idea at the time. My blog readership fell precipitously and nobody seemed to give a damn about what I was doing – which was a surprising amount of work.

Sometimes you are not in the mood for simile and metaphor – not feeling like subtle characterizations or complicated thematic structures – ready to eschew deep symbolism or confusing transcendence…. At times like that you want to read a yarn.

And that’s what I give you today… a yarn. Philip K. Dick has plenty of wild off-kilter stories to tell of alternate universes, alternate histories, or alternate lifestyle – but his plots are rock-solid. That’s why his work, though it never lifted him out of poverty while he was alive – have been made into so many well-known films (Total Recall, Blade Runner, A Scanner Darkly, Screamers, Minority Report, Imposter, Paycheck,The Adjustment Bureau… and more).

Here he tells a simple story, embellished with a little time-travel mystery and political comment concerning war-mongering and the McCarthy-era red scare thrown in. It’s one of his earliest works (1952) and one of the handful in the public domain.

He spins his yarn around an unlikely hero moving through time in a crystalline machine and lugging the eponymous body part in a plastic bag.

It’s more than a bit of fun.

The day was warm and bright. Conger’s shoes crunched the melting crust of snow. On he went, through the trees heavy with white. He climbed a hill and strode down the other side, sliding as he went.

He stopped to look around. Everything was silent. There was no one in sight. He brought a thin rod from his waist and turned the handle of it. For a moment nothing happened. Then there was a shimmering in the air.

The crystal cage appeared and settled slowly down. Conger sighed. It was good to see it again. After all, it was his only way back.

He walked up on the ridge. He looked around with some satisfaction, his hands on his hips. Hudson’s field was spread out, all the way to the beginning of town. It was bare and flat, covered with a thin layer of snow.

Here, the Founder would come. Here, he would speak to them. And here the authorities would take him.

This is day Fourteen of my Month of Short Stories – a story a day for June.

Though he never had any real financial success during his life, Philip K Dick was unquestionably one of the most unique, imaginative, and influential Science Fiction writers of all time. He has had at least ten films adapted from his work: Blade Runner, Total Recall, A Scanner Darkly, Minority Report, Paycheck, Next, Screamers, and The Adjustment Bureau. Most of his prodigious output could only find a printed home in low-paying magazines.

Some of his early fiction ended up in the public domain – and that’s where we find today’s little piece of pulp, Beyond the Door.

I’m not sure if the simple little lurid tale can be considered good… the characters are pretty cardboard, the action predictable, no real theme… but it’s a fun read anyway. It’s not a real good example of Philip K. Dick’s best work – his unique warped take on the slippery and ephemeral nature of reality and the inevitabilty of paranoia in modern life influenced a whole generation of modern and postmodern writers. I’ve always though of him as a readable Pynchon – as a Gateway drug into the world of fantastic paranoid literature and film.

In the weeks that followed after Doris left, Larry and the cuckoo clock
got along even worse than before. For one thing, the cuckoo stayed
inside most of the time, sometimes even at twelve o’clock when he should
have been busiest. And if he did come out at all he usually spoke only
once or twice, never the correct number of times. And there was a
sullen, uncooperative note in his voice, a jarring sound that made Larry
uneasy and a little angry.

But he kept the clock wound, because the house was very still and quiet
and it got on his nerves not to hear someone running around, talking and
dropping things. And even the whirring of a clock sounded good to him.

—- Beyond the Door, Philip K Dick

The 21 Absolute Worst Things in the World

7 Things I Learned From My Encounter With Russell Kirsch

A Big Week for Bicycling in Fort Worth

This Texas city is leaving its big brother Dallas in the dust when it comes to bike-friendliness. Just this week, the feds awarded Fort Worth with $1 million for a 30-station bike-share system, which is slated to be up and running next April. 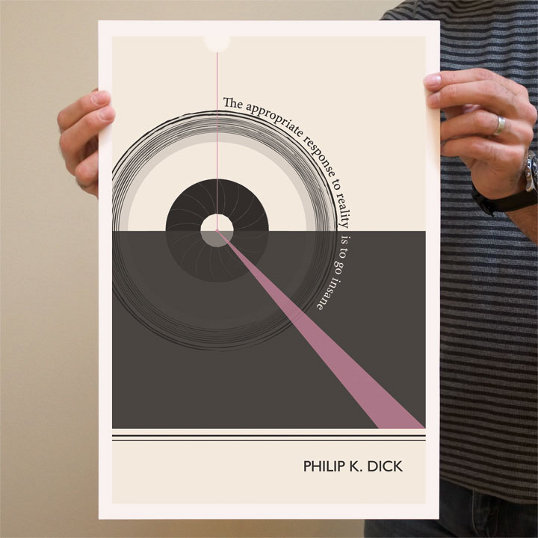 The most amazing quotes and graphics. I would buy all of these if I had the cash – they are so… perfect.

Blog – You Are What You Underline

A new one… Amundsen, from The New Yorker.

Then there was silence, the air like ice. Brittle-looking birch trees with black marks on their white bark, and some small, untidy evergreens, rolled up like sleepy bears. The frozen lake not level but mounded along the shore, as if the waves had turned to ice in the act of falling. And the building, with its deliberate rows of windows and its glassed-in porches at either end. Everything austere and northerly, black-and-white under the high dome of clouds. So still, so immense an enchantment.

E-Mails to My Past Self: 5 Facts I Wish I Could Send Back In Time

The 3 Most Poisonous Movie Clichés of the 60s and 70s