“Here, are the stiffening hills, here, the rich cargo
Congealed in the dark arteries,
Old veins
That hold Glamorgan’s blood.
The midnight miner in the secret seams,
Limb, life, and bread.

I think whenever we think of our hometowns, we tend to think of very specific people: with whom you rode on the school bus, who was your next door neighbor you were playing with, who your girlfriend was. It’s always something very specific.
—-Joyce Carol Oates 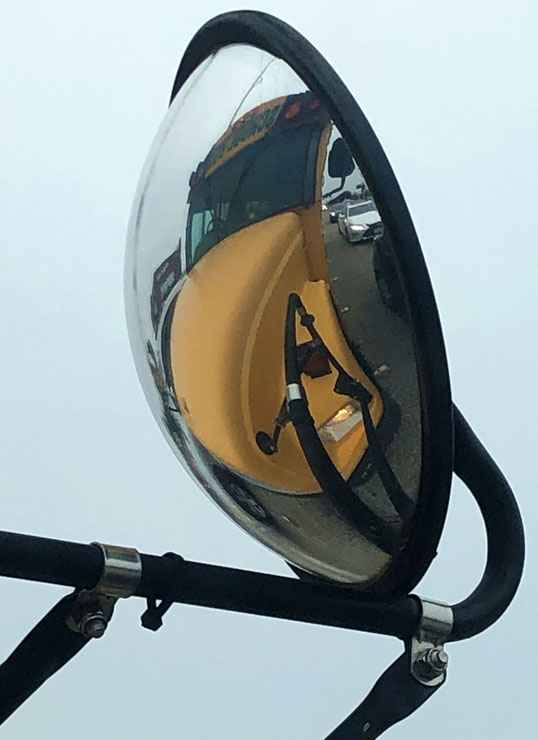 I find myself using my phone for photographs more and more, displacing my DSLR.

It was too cold and too late to ride my bike to work today, so I drove. Stopped, waiting for the light, at Plano and Beltline in the gritty cold and cloudy morning, I saw this scene right outside my driver’s window – the bus was making a left onto Plano. I fumbled in my pocket for my phone, got the password in on the second try, clicked the “I’m Not Driving” button (safety first) and snapped this out my window right as the light changed.

“A new social type was being created by the apartment building, a cool, unemotional personality impervious to the psychological pressures of high-rise life, with minimal needs for privacy, who thrived like an advanced species of machine in the neutral atmosphere. This was the sort of resident who was content to do nothing but sit in his over-priced apartment, watch television with the sound turned down, and wait for his neighbours to make a mistake.”
― J.G. Ballard, High-Rise 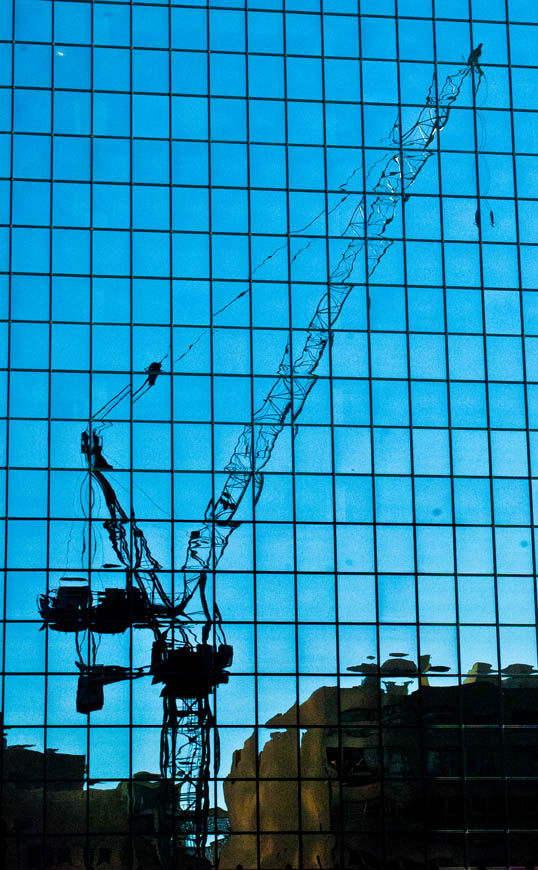 The city as mirrored crystal.

Here in the crystal city it is more unpleasant to be destroyed by gratification than by pain. The best things are its junk… as long as you understand what is junk. But the most dangerous of all is truth. A mirror can protect you from Medusa but the truth will stone you even in its reflection.

“What does a mirror look at?”
― Frank Herbert, Chapterhouse: Dune 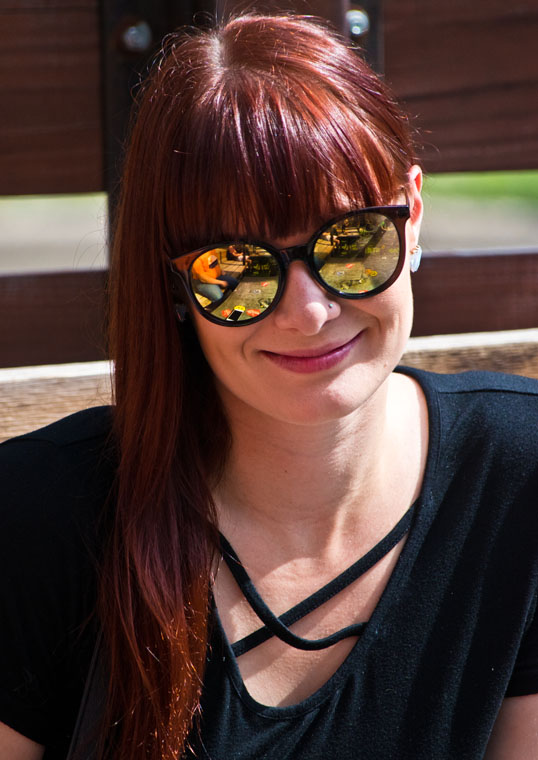 “A new social type was being created by the apartment building, a cool, unemotional personality impervious to the psychological pressures of high-rise life, with minimal needs for privacy, who thrived like an advanced species of machine in the neutral atmosphere. This was the sort of resident who was content to do nothing but sit in his over-priced apartment, watch television with the sound turned down, and wait for his neighbours to make a mistake.”
― J.G. Ballard, High-Rise 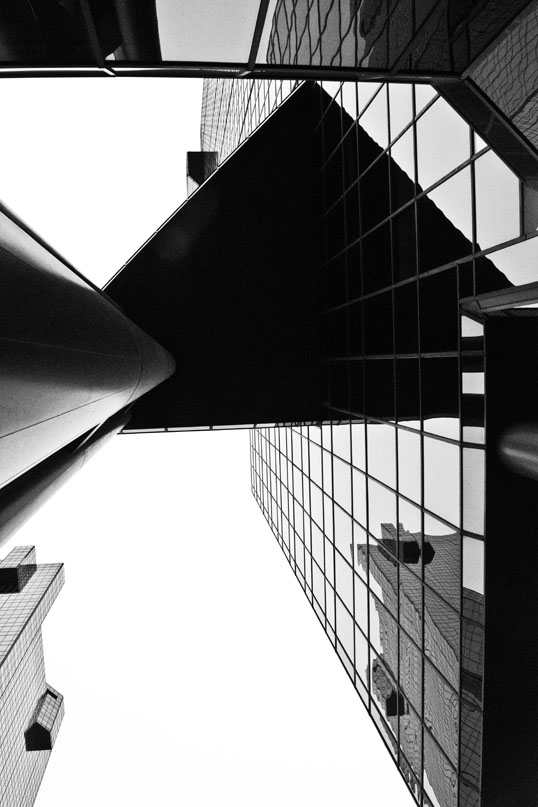 “Irene is a name for a city in the distance, and if you approach, it changes. For those who pass it without entering, the city is one thing; it is another for those who are trapped by it and never leave. There is the city where you arrive for the first time; and there is another city which you leave never to return. Each deserves a different name; perhaps I have already spoken of Irene under other names; perhaps I have spoken only of Irene. 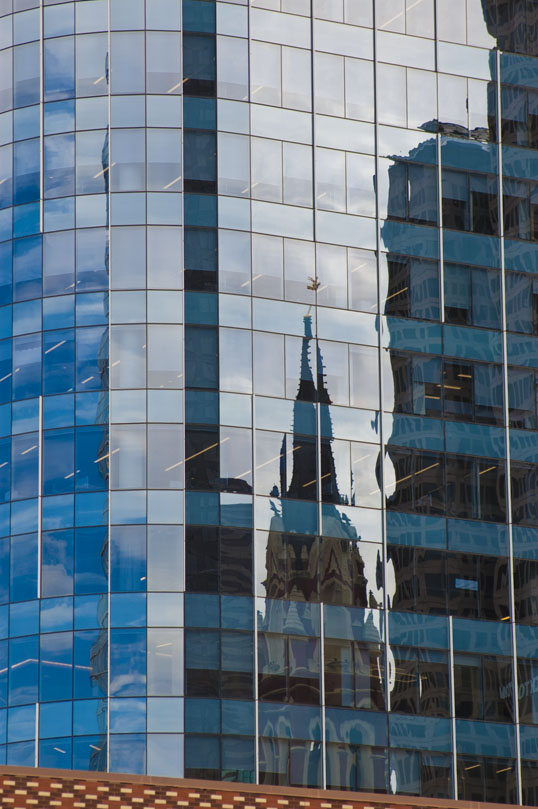 “If you try and lose then it isn’t your fault. But if you don’t try and we lose, then it’s all your fault.”
― Orson Scott Card, Ender’s Game 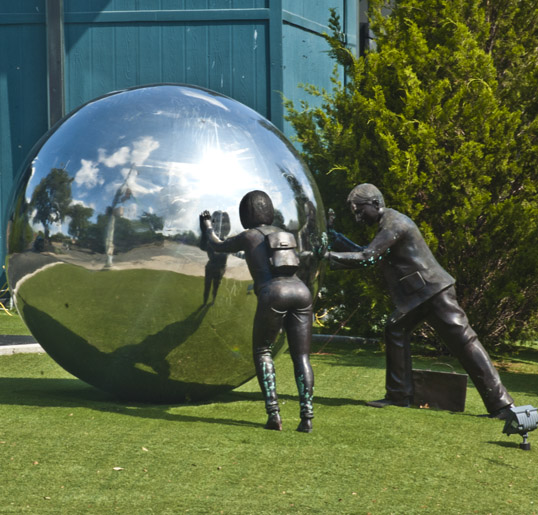 I was planning on riding my bicycle down to The Lot to meet Nick for his birthday. At first, I was going to ride the train downtown, then out the Santa Fe Trail, but the people on the train were getting on my last nerve, so I took that as an omen and left the train early, from the underground station at Cityplace. After riding the two extensive escalators to the surface, I had to work my way through East Dallas to the lake. That part of town is a confusing maze of angled streets, and more difficult on a bicycle than a car. You have to avoid some busy streets, some killer hills, and a mistake can put you miles out of your way.

However, I’ve been there a few times recently and was able to find my way without any real problems – with an occasional Googlemaps look on my phone.

I did make a little side trip to the intersection of Gaston & Munger. There’s a sculpture there – on the corner of a redone apartment complex of a man and woman pushing a mirrored sphere. I had seen it before, but never able to stop and get a good look.

My camera was in my pack this time, so I took a quick photo of it. I don’t know anything about its title or sculptor or backstory – but I’ll try to get back and get a better shot.

It’s in an unexpected spot – and looks really cool.

Plaza of the Americas
Dallas, Texas 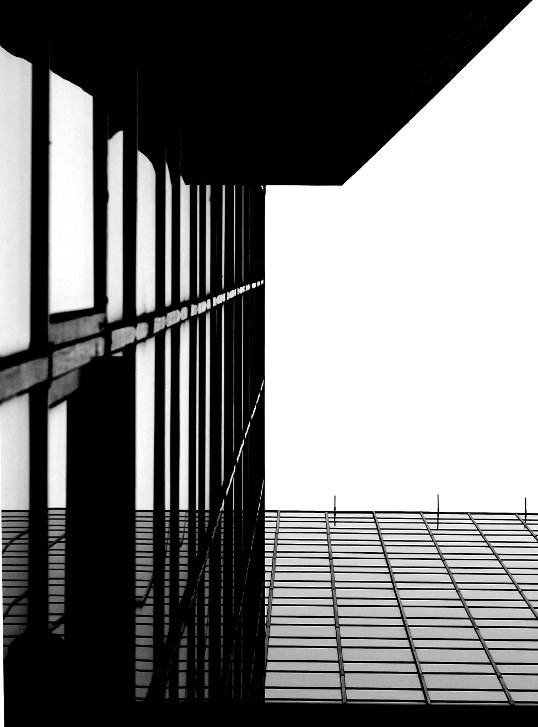 During the week, after work, I am so tired. All I can think of is getting home and falling into bed. The whole world feels dim and tilted – sloping toward the land of nod.

This is not a good thing – I don’t want to sleep my life away. I try and figure out something to do after work every day. I’m not always successful – but that doesn’t mean I can’t keep trying.

So I saw that tonight was an Art History lecture at Kettle Art in Deep Ellum (this is the gallery where I bought my bargain painting a month ago). Painter and educator Justin Clumpner was giving a talk in BYOB Art History:

Justin Clumpner’s titillating presentation on this-thing-we-call-art kicks off the final weekend of “Love, Death, + The Desert”. Join us tomorrow night at 7 for the first installment of Justin’s behind-the-scenes glimpse into the strange and mysterious world of art through the ages.

That sounded like fun – so I decided to go.

I’ve always had a soft spot for Art History. I took a year of it in college, as a break from my chemistry classes (and in a vain attempt to meet women). It turned out to be a revelation.

My instructor was an interesting person. On the first day of class he said, “We are supposed to go from ancient art to the present, but we are going to stop at 1860, because there hasn’t been anything worthwhile done since.” He lived in a world of his own – a world filled exclusively with the art of yesteryear. He talked about the Roman Colosseum and how it had canvas shades that would extend out over the audience. He asked, “Those astro-dome things nowadays have that too, don’t they?” The man had no idea what a modern sports stadium was.

But he was able to teach. I was fascinated by how, with a little instruction and after looking at thousands of projected 35mm slides from a rotating carousel in a darkened room (these were the days before powerpoint – and possibly better for it) – I could look at a totally unknown painting and tell who had painted it and in what year, give or take a few.

My biggest problem is that I would have four hours of chemistry lab before the art history class. I had to make a difficult left brain-right brain switch in only a few minutes of walking across campus. I remember looking at a slide of a beautiful Byzantine Mosaic and all I could think of was, “What pigment did they use to get that blue?”

One day I left my lab, walked to art history, ate lunch, studied on campus for a few hours, then walked the two miles to my apartment. I started cooking dinner when my roommates came home. They stared at me and said, “Bill, what the hell is that on your face?” I realized I still had my big heavy laboratory goggles on. I was so used to them I forgot to take them off and still felt normal. I can’t believe nobody had said anything to me yet that day – I must have looked like an idiot.

Today, after work, I caught the Red DART line downtown and then transferred to the Green to get to Deep Ellum. The Transit Gods smiled on me and I didn’t have a wait – so I arrived early. The talk was billed as BYOB and I wish I had gone to pick up a growler of local beer – but I settled for a little metal flask loaded with a few draughts of precious Ron Flor de Cana. 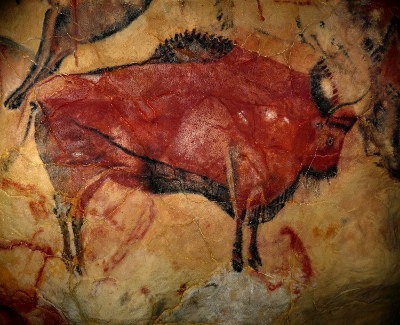 The talk was really interesting. Of course, it could only be a quick overview, from cave paintings of forty thousand years ago to post-modernism in one hour is a tough and fast voyage – but Justin Clumpner is a high school art teacher and knows how to bring an audience along with him.

He said he wanted to make the BYOB Art History Talks a regular thing, maybe once a month. I hope so – it will be cool to hear him talk about some themes and topics in a more detailed, comprehensive way. If you want to give it a shot, like Kettle Art and watch their feed – I’ll see ya there.

Maybe I’ll be able to get a growler of beer to bring. Some fresh local beer and an art history lecture… that’s a good way to spend a work night. Better than collapsing at home.

The Bank of America Plaza Building (the giant green thing) reflected in the mirrored sides of the Dallas Hyatt Regency. Taken from the Union Station DART platform while I was waiting on a train home from the Tweed Ride. 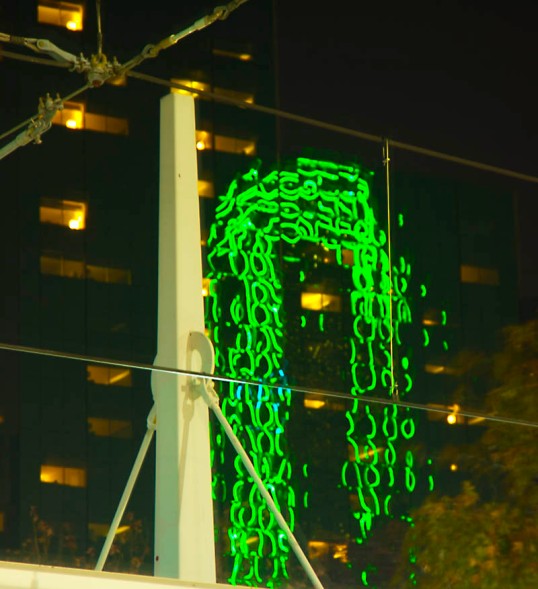 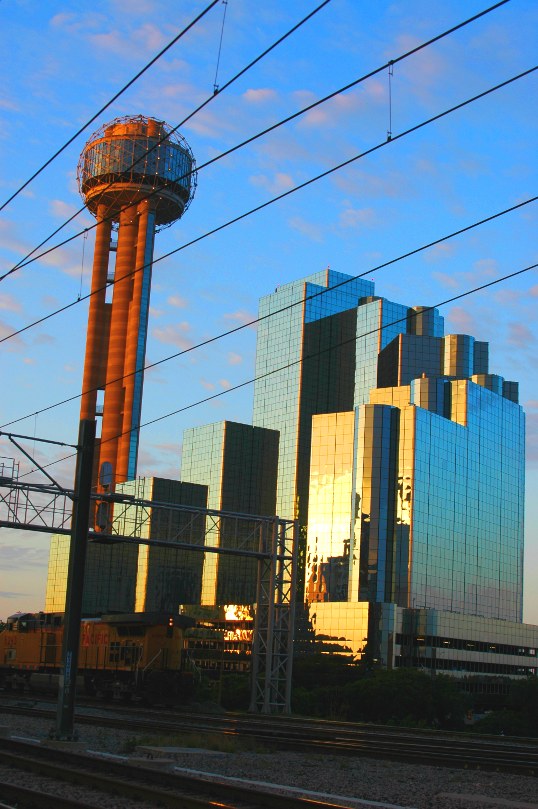