“We start off with high hopes, then we bottle it. We realise that we’re all going to die, without really finding out the big answers. We develop all those long-winded ideas which just interpret the reality of our lives in different ways, without really extending our body of worthwhile knowledge, about the big things, the real things. Basically, we live a short disappointing life; and then we die. We fill up our lives with shite, things like careers and relationships to delude ourselves that it isn’t all totally pointless.”
― Irvine Welsh, Trainspotting

When our kids were little, I used to take them down to Fair Park. It’s an underused and unappreciated piece of our city. We would stop off at the Age of Steam museum on the north side of the park. That was a little-known, overcrowded spot where they had an amazing collection of rolling stock – a true history of the American railroads. 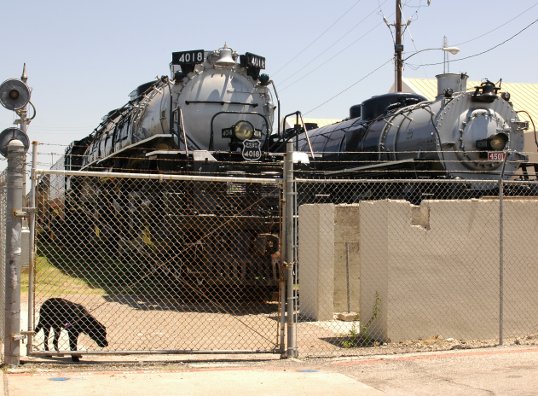 Big Boy 4018, next to a slightly lesser engine, in Fair Park, a few years ago.

The museum was always neglected by the city and actively discouraged by Fair Park officials. It became more and more threadbare and run down. I was worried that it would fade away. But, eventually, the city of Frisco came through and decided to build a brand-new, spacious Museum of the American Railroad. It seemed to take forever, but the thing finally came together. I can’t wait to visit the place when it opens.

One challenge was to move all the rolling stock from the Fair Park sidings all the way out to Frisco. No mean feat – over the last few years they have been using slack time in the various railways across the Metroplex to move their cars and engines out to their new digs.

Only one piece of equipment remained – but that was a doozy. Union Pacific Big Boy 4018. One of twenty-five “Big Boy” coal-fired steam engines built in the early forties – arguably the largest steam locomotives in the world. 133 feet long, and weighing one and a quarter million pounds (with its tender) – that’s a big hunk of iron to move across a giant modern city.

I wanted to see this.

For months now, the move has been scheduled and canceled – due to technical and scheduling problems. Finally, this Sunday, it looked like the thing was going to go off. I followed on facebook and twitter and made sure it was going to be leaving home – then packed up my bicycle, folding chair, camera, notebook and pen, and some cold water and headed out.

The route was available online and I picked out a spot in South Dallas where the rail line ran along a deserted stretch of grass and trees – that still had a road (Railroad Avenue) right next to it. When I arrived, I realized I must have picked a good spot – there were quite a few folks there, including news reporters, official rail line photographers, railroad dispatchers on their days off, and a good gaggle of serious train fanatics.

Unfortunately, there were some serious delays and we waited for several hours while a number of other trains sped by, but no Big Boy.

While we were waiting some other trains came by. All the folks on this Amtrack were looking out the windows wondering why everyone was standing there with cameras. 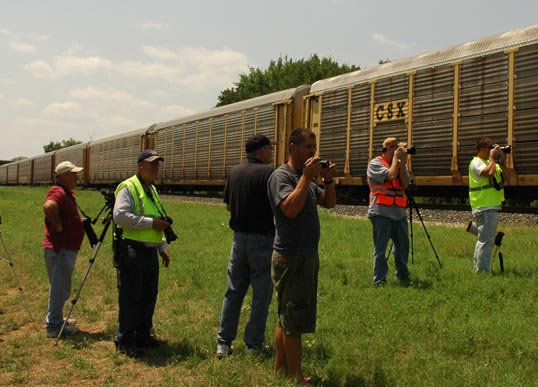 A freight train stopped on the track, blocking the route, waiting for clearance ahead and we all realized it would be several hours more – so I took off and went to a favorite place in Exposition Plaza – Pizza Lounge – for a slice, an IPA, and watch the Rangers get beat on the television over the bar. I was able to keep up on twitter – and when it looked like the train was moving again I headed out.

The crowd at Scyene Road, under the DART bridge, waiting.

This time I stopped at Scyene road, near the DART station. The train would reach that spot first, and there was a good crowd of folks still waiting. It still took about another hour, but it was pretty darn cool – worth the six-hour wait. Several serious railroad fans were saying, “Seeing an engine like this moving on the tracks is a once-in-a-lifetime experience.”

Of course, it wasn’t under its own power. There was talk once of restoring this engine to operating condition, but it would be prohibitively expensive, nobody wants coal burning trains around, and there isn’t much track left that can take this size of machine. It was pulled along by a diesel engine, and was hooked to a long line of tank cars to provide braking and stability. 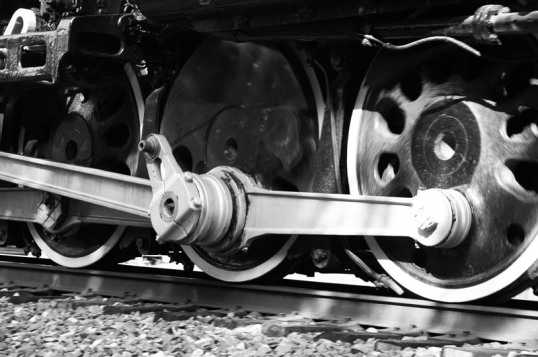 I was expecting the size but not the fantastic complexity. The size, number, and beauty of all those parts spinning as the train went by was incredible. Now I understand why the train fans wanted to see it move. When you look at these things in a static museum it’s easy to forget and hard to comprehend that they were built to move, move fast, move long distances, and pull unimaginably heavy loads.

Once it went by I drove back to Railroad Avenue, and as I pulled in, the Big Boy was already passing. I managed to get a shot of it as it went over Bexar Street.

The Union Pacific photographer told me of a spot where I could get a picture of the train with the Dallas skyline in the background, but there was another tall container train on a siding blocking the view. The train still had a long way to go, but I was getting tired and needed some water, so I headed home.

“Choose a life. Choose a job. Choose a career. Choose a family. Choose a fucking big television. Choose washing machines, cars, compact disc players and electrical tin openers… Choose DSY and wondering who the fuck you are on a Sunday morning. Choose sitting on that couch watching mind-numbing, spirit crushing game shows, stucking junk food into your mouth. Choose rotting away in the end of it all, pishing your last in a miserable home, nothing more than an embarrassment to the selfish, fucked up brats you spawned to replace yourself, choose your future. Choose life… But why would I want to do a thing like that?”
― Irvine Welsh, Trainspotting

Big Boy in a Dallas Backyard

The statue was in the front yard, until the man made him move
Kip’s Big Boy Statue Gone From Abrams Road Lawn, Thanks to City Code Enforcers
…now he’s in the back yard, but sort of visible from the road.

Still, what a great backyard – imagine the picnics you could have with the Big Boy looking over your spread. You would be the coolest dude in the ‘hood.

I have such great memories of sitting around a table in a Kip’s Big Boy (or Shoney’s Big Boy, or Bob’s Big Boy – depending on the state I was living in) late at night… or early in the morning. Sitting around eating some greasy food, tired, talking – especially with people I knew really well, or people I had just met… or best of all, a mixture of both.

Where did the waitresses working in Big Boys at three in the morning come from? They were all the same – middle aged, rode hard and put up wet, brutally efficient. They were their own breed. Imagine the stories they could tell.