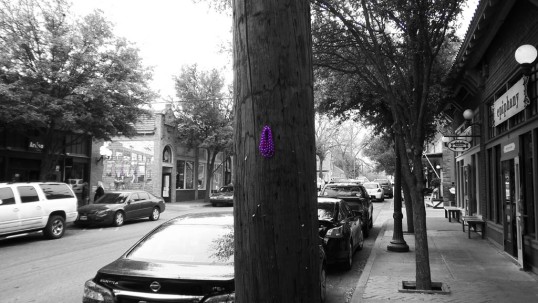 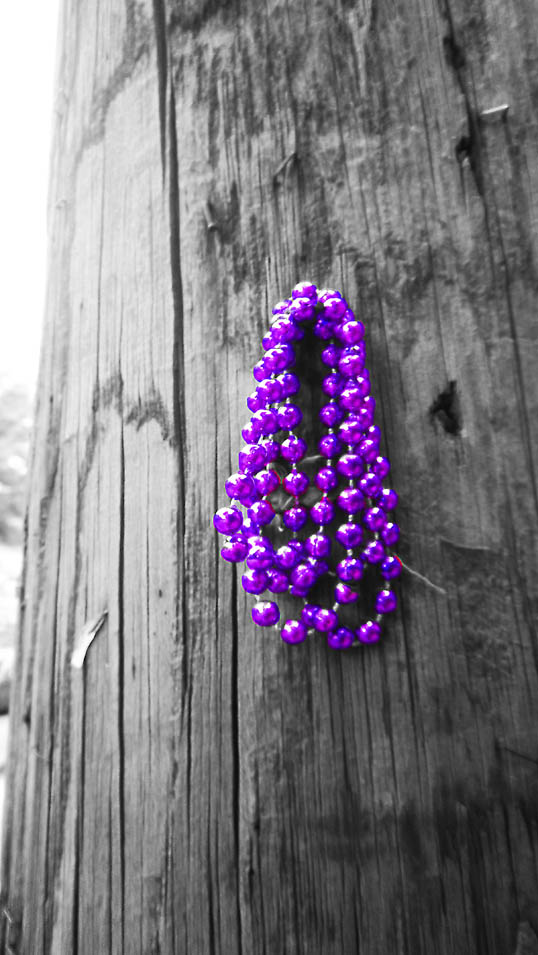 Mardi Gras is bars and restaurants changing out all the CD’s in their jukeboxes to Professor Longhair and the Neville Brothers, and it is annual front-porch crawfish boils hours before the parades so your stomach and attitude reach a state of grace, and it is returning to the same street corner, year after year, and standing next to the same people, year after year–people whose names you may or may not even know but you’ve watched their kids grow up in this public tableau and when they’re not there, you wonder: Where are those guys this year?

It is dressing your dog in a stupid costume and cheering when the marching bands go crazy and clapping and saluting the military bands when they crisply snap to.

Now that part, more than ever.

It’s mad piano professors converging on our city from all over the world and banging the 88’s until dawn and laughing at the hairy-shouldered men in dresses too tight and stalking the Indians under Claiborne overpass and thrilling the years you find them and lamenting the years you don’t and promising yourself you will next year.

It’s wearing frightful color combination in public and rolling your eyes at the guy in your office who–like clockwork, year after year–denies that he got the baby in the king cake and now someone else has to pony up the ten bucks for the next one.

Mardi Gras is the love of life. It is the harmonic convergence of our food, our music, our creativity, our eccentricity, our neighborhoods, and our joy of living. All at once.”
― Chris Rose, 1 Dead in Attic 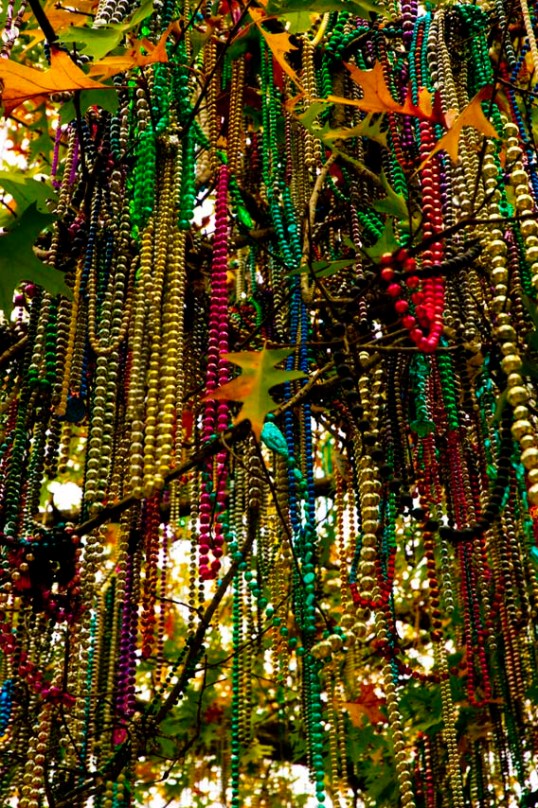 “I dust a bit…in addition, I am at the moment writing a lengthy indictment against our century. When my brain begins to reel from my literary labors, I make an occasional cheese dip.
~Ignatius J. Reilly”
― John Kennedy Toole, A Confederacy of Dunces 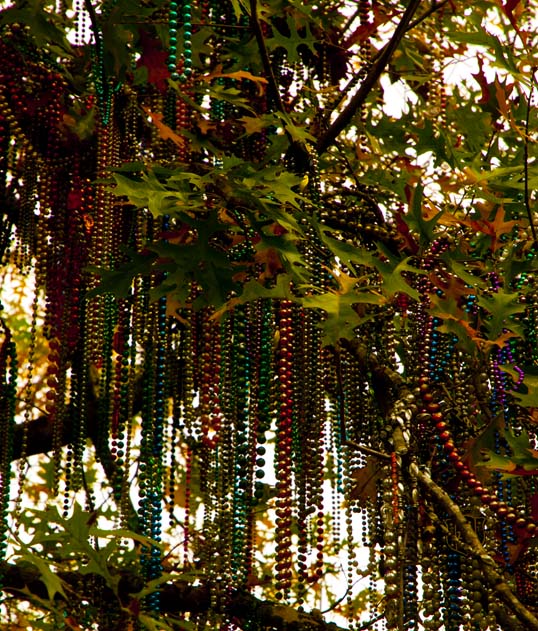 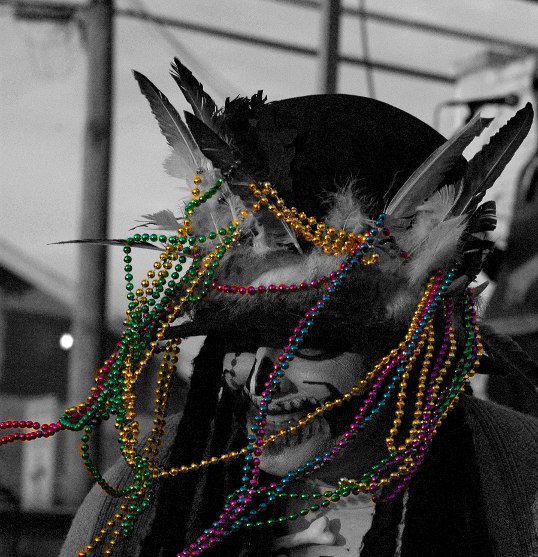 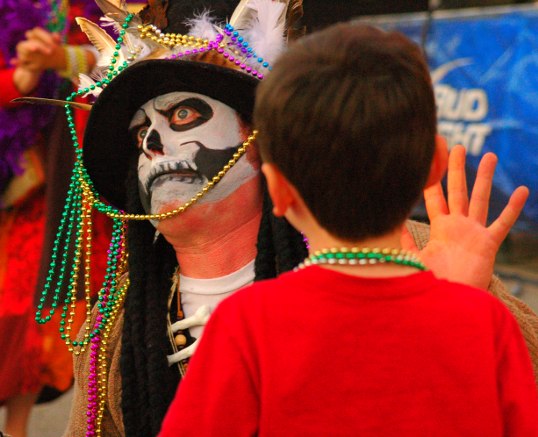 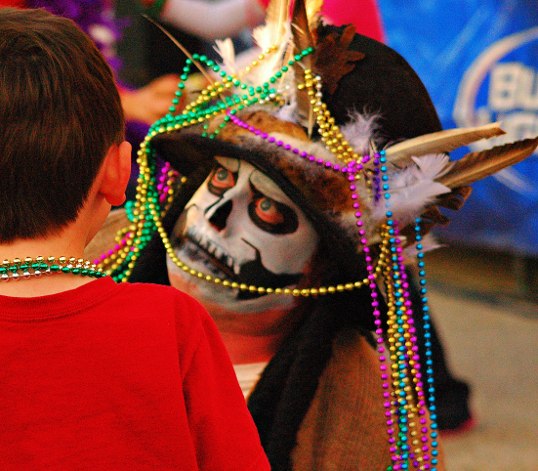 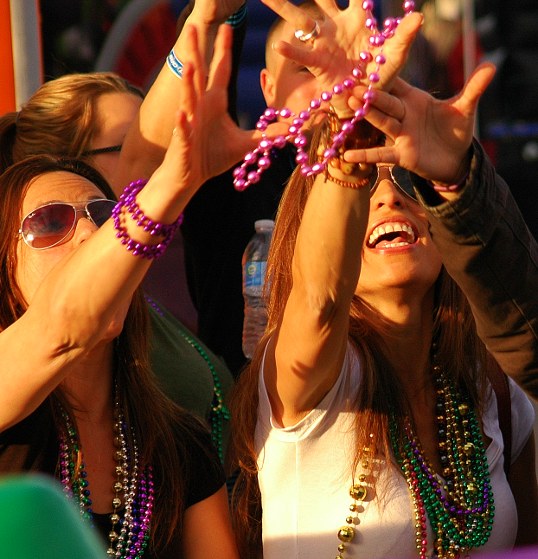 Fight for the beads.

I have this thing about Mardi Gras beads. I love to catch parade throws – yelling “Beads! Beads!” or “Big Beads!” – making eye contact with the Krewe member on the float – the cheap bilious plastic string floating through the air – the jump – the catch – and finally, adding the string to the growing collection around my neck. It’s stupid, but I love it.

Two years ago, in New Orleans, we went out to a night of smaller parades on Thursday or something… sort of a warm-up for the big Super Krewes that were coming up on the weekend. I like these smaller Krewes – they have an irreverent sense of humor that the big, expensive parades can’t match.

At any rate, after a day and night of catching, my neck was festooned with a thick collar of plastic beads – especially the smaller ones thrown by the less-well-financed Krewes of that afternoon and evening. We were hungry so at two in the morning or so we ducked into an Italian Restaurant out on St. Charles past Tulane.

As we sat there I became a little self-conscious about the beads and decided to take them off. That’s when I realized that they were terribly tangled around my neck and that I was trapped, slowly choking in a noose of bright plastic spheres strung on string. I sat there trying to work on the beads while fighting back panic.

“Just cut them off, here I have scissors in my purse,” said Candy.

But I couldn’t. I have no idea why, but the fact they were thrown through the air and caught made them special, somehow. It took me an hour of careful, patient untangling to get them off.

Now, I’ve accumulated a big plastic tote full over the last few years. It sits in the bottom of a closet and I should throw them away… but I can’t do it. What I need to do is find a parade and walk – throw them myself – return them from whence they came. Back into the wild – catch and release.

That I could do.

Well, for the last two years we are way too broke to go to New Orleans for Carnival. The best we could do, last year and this, is go to Oak Cliff for the Bishop Arts Mardi Gras parade.

We made our reservations for this fall in New Orleans for Tulane Parents weekend and for next year’s Carnival. We really liked out B&B on Saint Charles, the Mandevilla, and will be going back there. 2012 will be our third Mardi Gras in a row and I’m already looking forward to it.

Last Mardi Gras was pretty much off the hook. The only downside is we don’t get to see Lee as much as we’d like – he’s hanging too much with his friends to meet up with his parents.

A photographer shot him and had his picture go out over the AP wire and it showed up all over the web and in a few real newspapers. I guess it’s pretty cool to have your photograph gracing a blog that asks the question, “Are there any Mardi Gras Celebrations in North Idaho?.” It seems the answer is “Yes!” but I’ll stick to New Orleans for this year at least.

Here are some great Carnival photographs – Lee is about two thirds of the way down.

The downside to Mardi Gras in the Big Easy is that it is a logistical nightmare. I’m already thinking of strategies and resources to be able to get around… places to go, people to see, and things to do.

I do need to get over my bad habit of grabbing too many beads. I had a bit of a panic attack and almost strangled myself trying to get them off of my neck and over my head in an Italian Restaurant at two in the morning. They were so thick and tangled I was trapped. Candy told me, “Just cut them off!” – which was good advice but I couldn’t do it. They may have been cheap plastic beads made in China – but they were Mardi Gras beads, caught from a parade. I can’t cut them off.

Instead of beads, my favorite throw are the doubloons. These are cheap metal coins thrown from the parade floats. There are nice ones – collectors items, given to friends of the Krewes, but that’s not what I’m talking about. They are sometimes pretty hard to get, harder to catch than a string of beads, and the Krewes are a bit more stingy with the doubloons. I did learn one trick is to run up to the marshal, usually in a convertible at the head of the parade, and he’ll hand you a doubloon.

This year, Orpheus and Endymion ran back to back and we had a nice spot near the start of the parades, down on Napoleon Street, almost to Tchoupitoulas – right behind Tipatina’s. Some of the folks that lived there gave me a couple handful of doubloons, including some from previous years and other Krewes.

I’ve never been a collector of things, and I’ll never collect doubloons, but I like my growing pile of aluminium coins, they remind me of Mardi Gras. Here are a few: 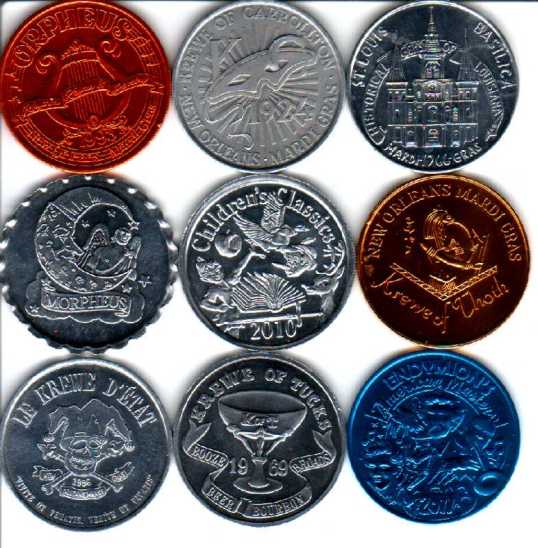 I saw on Ebay, on the web, that you can buy piles of doubloons, but that’s not the same. They have to come from a parade. There’s a real excitement… hard to explain – standing in that huge crowd, shoulder to shoulder with a million strangers, ears ringing from the roar of the bands and the crowd, everyone yelling at the massive gaudy floats, desiring these worthless trinkets that come flying through the air. The arc of the flight, the leap, the grab.