“Respectable people… What bastards!”
― Émile Zola, The Belly of Paris

Cover of The Belly of Paris, by Emile Zola, translated by Mark Kurlansky

I am now a good chunk (have been reading for about a year) into Emile Zola’s twenty volume Rougon Macquat series of novels. Attacking this pile of books in the recommended reading order:

The next one up was The Belly of Paris.

One reason I am reading this long series is that the books are available in ebook form for free from project Gutenberg. This is a good thing… a fantastic thing actually, but there is only one catch. The free, public-domain English Zola texts from Gutenberg are all contemporaneous translations by Henry Vizetelly (and his son Ernest Alfred Vizetelly). Now Vizetelly was a hero – he believed in the Zola books and paid a huge price for translating them and publishing them in England, however, the translations aren’t really all that good. They are written in an anachronistic language, hard on the modern eye, and, worst of all, are censored. The original French stories can be pretty racy and he had to cut the best parts out to get the books published in England. Still, he was prosecuted twice and imprisoned  for obscene libel because of his translations of Zola’s work.

Before reading The Belly of Paris (also know as Une Page d’amour, The Fat and the Thin, Savage Paris, The Markets of Paris) I discovered that there was a modern translation by Mark Kurlansky. I have read two of his non-fiction books, Salt and Cod and really liked them. Salt in particular was very interesting to me, my first job out of college was working as a chemist at a salt mine and evaporation plant in Hutchinson, Kansas (the plant is gone now – but the mine is still working and you can take a tour).

So, I bought a copy of the Kurlansky translation and it was very good.

There is a plot arc to The Belly of Paris – Florent escapes from Devil’s Island (similar to the more famous modern story of Papillon)  and returns to Paris. He spends the book trying to reestablish his life and struggling with his radical political leanings. This story is really a framing device to enable Zola to immerse the reader in the eponymous Belly of Paris. The Belly of Paris is the immense food market at Les Halles. 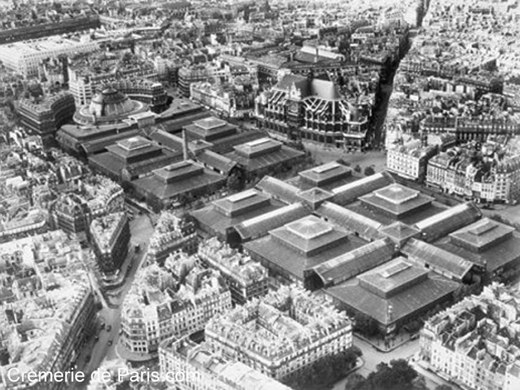 The vast food market at Les Halles in Paris, the setting of The Belly of Paris

Design of Les Halles in 1863, By Victor Baltard – Image from Wikimedia

Constructed in the 1850’s, Les Halles was a series of gigantic sheds full of stalls where every kind of food was sold – and Zola uses every excuse to tour every nook and cranny of the market – from vegetables to poultry, meat to fish, bread to spices, candy to charcuterie, the movement, preparation, and sale of every imaginable foodstuff is set down in detail. The people involved are hard working and full of human foibles – gossipy, jealous, and headstrong. These complex relationships form the real heart of the story and the conflict of the novel.

Imagine a huge city, a Paris of millions of (French, and food-obsessed) inhabitants that have to be fed, every day, in a world without gasoline, trucks, electricity or refrigeration. It starts in the dead of night with horse-drawn carts drawn to the city in caravans carrying the bounty of the countryside. The vegetables are prepared, the animals are slaughtered, the fish are cleaned, the salted meat is salted, the charcuterie is cured, the bread is baked – then everything is set out for sale as the population of Paris descends to buy their daily meals. Zola lays it all out in a fantastic kaleidoscope of food – sights, sounds, smells, and taste – and the characters that handle it.

The book is full of contrasts – the Fat and the Thin, Beautiful Lisa and The Beautiful Norman, political radical Florent and his comfortable brother. The Belly of Paris isn’t known as one of the series’ best – but I found it fascinating. Like The Ladies Paradise and modern retail I can’t help but compare the market at Les Halles with a modern Whole Foods or other mega grocery store.

Interesting stuff. And now on to La Joie de Vivre.

10 responses to “The Belly of Paris”