“I saw the world I had walked since my birth and I understood how fragile it was, that the reality was a thin layer of icing on a great dark birthday cake writhing with grubs and nightmares and hunger.”
― Neil Gaiman, The Ocean at the End of the Lane 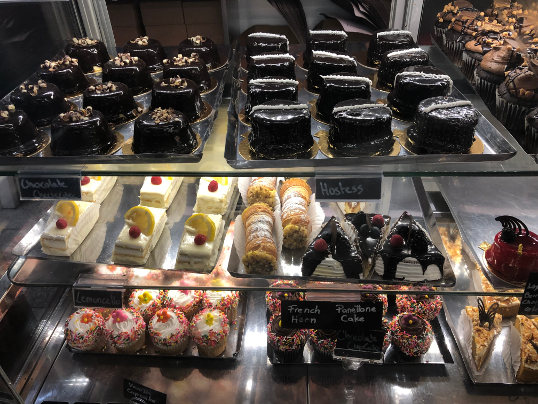 There is nothing as beautiful as the display cases in an Italian pastry shop. They may even… especially en masse… look better than they taste.

These photos are of the cases in Modern Pastry, in Boston’s North End. We bought Napoleons and Carrot Cakes – both visible in the second photo. We ate them walking in the street – which isn’t ideal.

We had gone to Mike’s Pastry, which is very famous, first – but the place was packed with a line down the street, so we walked down another block to the Modern, which was full, but without too long of a wait.

The funny thing is, sixteen or so years ago, in 2003, Candy and I had gone to Mike’s for a pastry, and an older gentleman came up to her on the street and told her to go somewhere else, other than Mike’s…. I think he said that Mike’s was, in his word, “A tourist trap!” I can’t remember where he recommended… I don’t think it was the Modern. Candy is from Texas, and he… well, he was not – so I had to translate, they couldn’t understand each other. 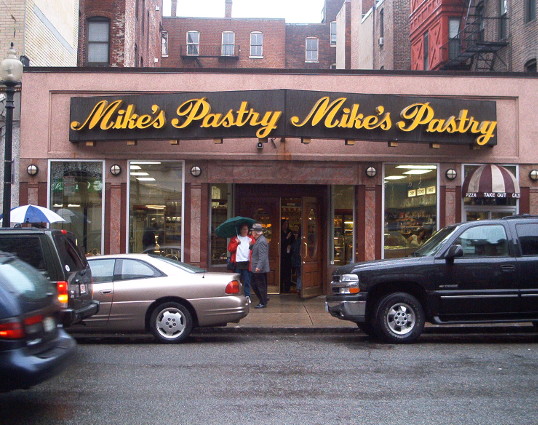 Candy and the older man in front of Mike’s Pastry in Boston’s North End. This was in 2003 – it still looks exactly like this today.

I was way too tired. We had finished work the day before (a long, tough week) and treated ourselves to dinner at an Italian Restaurant in the North End (Ristorante Limoncello) some pastry (Modern Pastry shop, Mike’s was too crowded – line was down the street) and a drink at the end of the hockey game (The Black Rose). Then, when I settled down in my hotel room I discovered that HBO GO was on the TV complimentary and, against my better judgement, I watched the episode of Game of Thrones I had missed because I was flying the previous Sunday. It was getting too hard to avoid spoilers.

My flight was scheduled for eight (though, due to mechanical problems it didn’t actually leave until ten) so that meant I had to get up at five, which meant only a couple hours of sleep. I was woozy in the morning, but was treated to a glorious sunrise painting the buildings of downtown Boston a bright crimson.