“I’m not sure he’s wrong about automobiles,” he said. “With all their speed forward they may be a step backward in civilization — that is, in spiritual civilization. It may be that they will not add to the beauty of the world, nor to the life of men’s souls.”
― Booth Tarkington, The Magnificent Ambersons

A while back, on July 26, 2012 to be exact, I wrote a blog entry called Bicycle Lanes. In it I wrote a bit about Richardson’s attempts at improving its cycling infrastructure. I praised the bike trails and especially the bike lanes (while noticing some dangerous flaws).

But I also mentioned how dangerous some of the railroad crossings are. For example, at Arapaho (a very busy street that is necessary for me to get to the library and a few other spots) I took this photo:

There are three lanes of traffic both ways going through that little space – going fast, up to fifty miles per hour or more (don’t lecture me on speed limits… this is Texas). There is no sidewalk, no shoulder, no other way to cross. That hump has a set of rough wheel-swallowing steel rails sitting there on top of it. You hit that wrong on a bike and you are going down. There is no other crossing to the north for a mile. It’s two miles south to a safe crossing.

The Grove road bike lane is right behind me… as is the Arapaho DART station. If I want to ride my bike to the library; I have to go through there. If there is any traffic at all I have no alternative than to stop, get off my bike, and carry it over the tracks.

Which isn’t the worst thing in the world… but I wish someone would work on these choke points.

It’s been almost seven years now, and the city has done something. Here’s what that exact same railroad crossing looks like now: 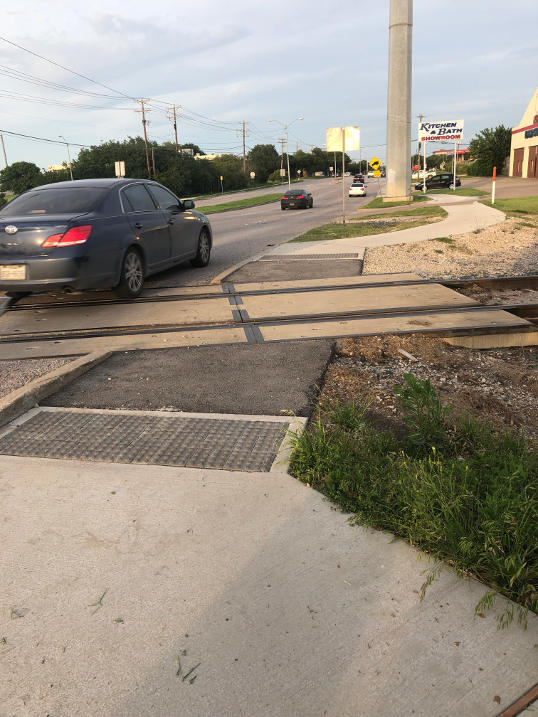 It’s really only a couple of concrete plates, a bit of asphalt, and some sidewalk work – but it makes all the difference. To almost everybody – those that only drive – this is something completely unnoticeable. But to people that cycle for transportation (and for pedestrians) this sort of thing is a game-changer. To think that the city and the transportation departments are actually, finally thinking about people that aren’t in hurtling steel boxes is a breath of fresh air.

I know, by the way, that it isn’t a good idea to ride on the sidewalk – but that is a rule that sometimes, like along fast moving arterial streets – is made to be broken.

They did the same thing on the other side of the road – going the other way. That makes it not only possible, but easy, for me to ride my bike to the library. Little improvements.