“I’m sorry,” the driver said, making heroic efforts, but when he remembered
the sudden check to his lorry, the crash of bricks falling, he became
convulsed again. One moment the house had stood there with such dignity
between the bomb sites like a man in a top hat, and then, bang, crash, there
wasn’t anything left—not anything. He said, “I’m sorry. I can’t help it, Mr.
Thomas. There’s nothing personal, but you got to admit it’s funny.”
—-Graham Greene, The Destructors

I found this destroyed V-Bike when I was taking a photo of the mural called “The Storm” on the Ace Parking Garage at 717 Leonard Street for yesterday’s blog entry. If you look in the lower right portion of the photo of the mural you can see the bike, sort of – gives a sense of scale.

If you live in Dallas, you are used to seeing bike share bikes broken all over the place. This one was in particularly bad shape – it looks like it was torn apart by a T-Rex. I assume it was run over – hopefully nobody was riding it at the time.

I have wanted to write about the saga – the rise and fall – of the bike sharing movement in Dallas, but it is/was too complex/bizarre/exciting/sad and kept changing – writing about it was like nailing jelly to a tree.

This Texas Monthly Article is as good a summary as you will read. In short, four or five companies jumped on the Dallas dockless bike share bandwagon and tried to stake out territory by putting thousands upon thousands of bikes out on the streets and sidewalks. They were everywhere. Then, there was a predictable crash and now you rarely see a rideable bike – except a lot of homeless have hacksawed the locks off and are riding them for free. Where the bikes failed they were replaced by electric scooters – which seem to be more practical for a few reasons.

I have mixed feelings – of course I loved the idea of the dockless bikes, freedom and anarchy and all that, even though I couldn’t imagine actually riding one (I have one of my personal bikes with me almost all the time in Dallas). The highly regulated bike share in New Orleans seems to work very well (though that is a tourist city – something completely different). And I do find the scooters useful.

So I’ll just be sad at the torn up bikes. Especially the V-Bikes – they were assembled locally and have some interesting innovations – single front fork blade and chainstay, enclosed shaft drive, and no-flat tires for example. They did have one fatal flaw though – the seats weren’t adjustable and I am too tall and couldn’t ever ride one. 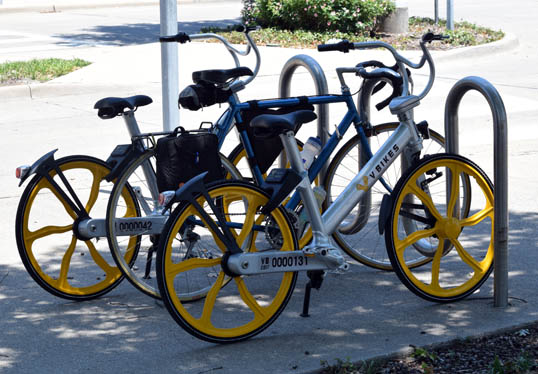