I’m on a mexican radio
I wish I was in Tiajuana
Eating barbequed iguana
I’d take requests on the telephone
I’m on a wavelength far from home
I feel a hot wind on my shoulder
I dial it in from south of the border
I hear the talking of the dj
Can’t understand just what does he say?
Radio radio…
—- Wall of Voodoo, Mexican Radio 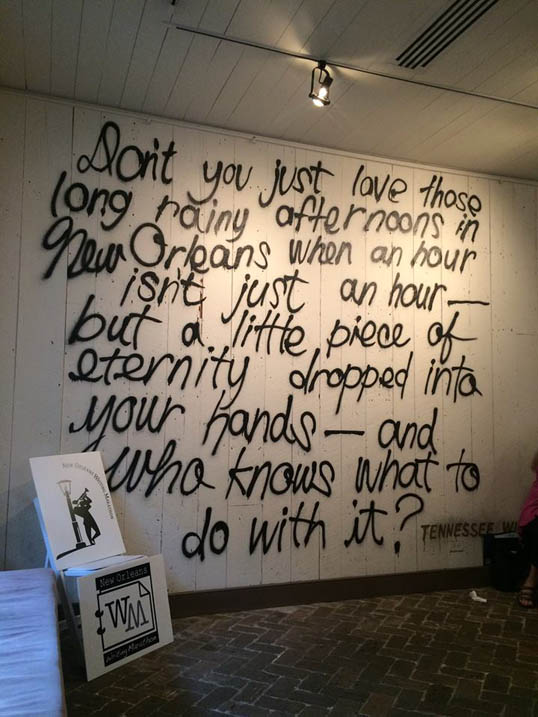 I wrote about this on my Facebook page back in February – but I don’t think a lot of people followed the link.

At any rate, this story started back in 2012, on a trip to New Orleans. I ran into a group at the St. Vincent’s Guest House and soon was involved in a one-day writing marathon – walking around with a handful of folks, scribbling away.

I was inspired by the experience to the point I organized a Writing Marathon or two of my own, here in Dallas.

Then finally, in July of last year, I was able to swing attending the full week-long Writing Marathon Retreat – branching out from the Gallier House to write across the French Quarter and beyond.

One day, the group I had gone with that day stopped for the fixed-price lunch at Antoine’s (highly recommended if you are in New Orleans in the summer). I remembered an incident that had happened in that very restaurant thirty five years earlier. I pulled out my pen and notebook wrote up my memories in the bar.

At the end of each day, there was the option for a few folks to stand up and read from what they had written earlier. I put my name on the list and read the story from Antoine’s. The readings were recorded.

Then, in February, a selection of the recordings were played on KSLU radio.

If that link doesn’t work – go here – http://www.kslu.org/awards_recognition/index.html and click on “2017 Writing Marathon.”

People have asked me about the siren at the end of my reading. That isn’t a sound effect – the fire engine actually went by on the street outside, siren blaring, as I finished.

Now I need to get going and register for the 2018 Retreat. So much fun.