As I was working my way through South Dallas on my bicycle exploring three of the Nasher XChange sites – between Flock in Space and Black & Blue: A Cultural Oasis in the Hills – I took a look at the GPS on my phone to make sure I wasn’t lost. I realized that I wasn’t far from something I wanted to visit. Even though I was behind schedule and getting tired I would be passing close enough to make a side trip.

I turned off of Bonnie View Road into a neighborhood until I reached College Park. Past some guys playing basketball I found what I was looking for – a new park pavilion designed by the Oslo-New York firm Snøhetta. A review of the structure had shown up in the Dallas paper and around – gathering some architectural praise.

It looked pretty interesting, enough for me to visit. 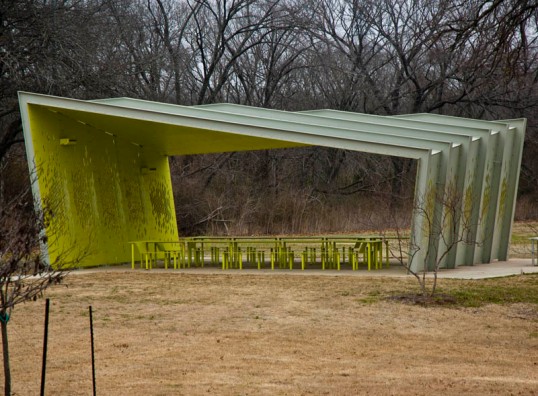 I couldn’t stay long, but it was pretty cool in person. An ingenious design – unusual, yet in harmony with the site. Striking, yet useful. It seems to have been economical to build and designed to last a long time.

The picnic tables and outdoor grills were an unexpected treat – I loved the design of these. I didn’t think there was much you could do with public picnic tables – but these were unique and cool.

Later, at home, I did some web research and found a publication that extolls the virtues of the Pavilions in Dallas parks – listing a whole slew of them.

Now that I’ve finished with the Nasher XChange, maybe that’s something I can cycle through town and look at. Picnic Pavilions are pretty pedestrian objects and I have to say I haven’t noticed them for a long time.

But isn’t that the point? To try and ride around my own city and notice things that everyone usually ignores?