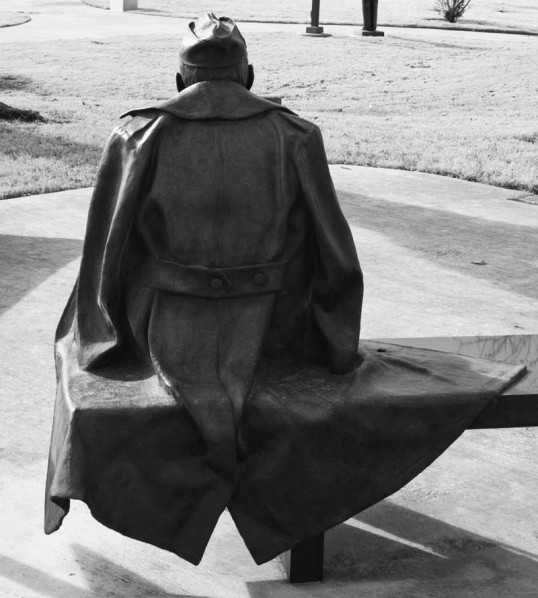 I was riding the DART Green line that runs out from Downtown Dallas Northwest, roughly following I35, and had a nice window seat. I was looking out at an area I don’t get to visit very often, looking for something… anything… interesting. Of course, one thing I always look for is public sculpture.

It was only a quick glimpse and I wasn’t sure what I saw. It looked like a nice little park with a nice little concrete walking trail around it. On the side facing the train tracks it looked like a sculpture, but I couldn’t be sure. Made of dark bronze metal, it spread out in a triangular shape, almost like a draped fabric.

In the split second I had, it almost looked like Batman sitting on a bench.

Since I didn’t know where I was, I memorized the next cross street and then looked it up on Google Maps. It was a new Farmer’s Branch park called Liberty Plaza.

I made a note.

The other day I was in the area for something else and decided to swing by and to get a closer look at what I had seen. I wondered if I had imagined the whole thing.

I wasn’t too far wrong. It was a sculpture called Poppies, by W. Stanley Proctor. It was not Batman, but a World War Two veteran. He had a long flowing coat and I had seen it from behind.

I have always been interested in art that looks completely different from a different direction. The classic example is the San Francisco de Asis Church in Taos, New Mexico – made famous by Georgia O’keeffe. I’ll never forget visiting it – I was surprised at how cool it looked from the front.