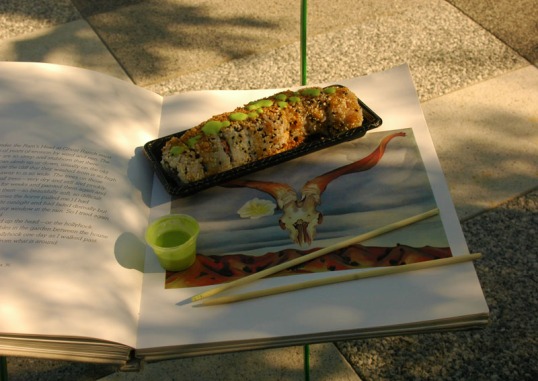 It was way too hot. The mercury was rising well past the century mark and the Texas sun was beating down, roasting the world with its searing incandescence – still, I wanted to get out and do a bike ride – get some mobile urban photography done – for fun and fodder for blog entries. I packed up, rode to the station, took the DART train downtown and started wandering around.

The night before I had ridden some similar streets with a lot of other folks – the Critical Mass Dallas last-friday-of-the-month ride. I had a blast. We rode from Main Street Garden Park, through downtown, past the Hyatt Regency and across into Oak Cliff, down to Bishop Arts, and then on to a Cuban-Themed party on a rooftop along Jefferson Street (a few doors down from the Texas Theater).

A lot of cool folks, a good time. We rode back across the Jefferson Street Viaduct bike lane – which was spectacular at night. I’m going to have to repeat some of that ride with a camera and a bit of time.

At any rate – one nice thing about a night ride is the cool air.

By noon the next day – cool air was only found inside.

I locked up my bike in Deep Ellum and started walking around, but the heat was getting to me. I was feeling dizzy and my mind was fuzzing up like an old slice of bread. So I thought about bailing and heading home to flop around in the air conditioning, but I had brought two liters of iced water in the cooler that straps to the back of my commuter bike. I’ve learned that I can take the heat pretty well as long as I keep moving and drink as much cold water as possible.

I drank some water, rode a bit, drank some more, found some shade… and felt a lot better.

A week ago, I had been in Klyde Warren park, killing a few minutes, and had thumbed through a book of Georgia O’Keeffe paintings that was set out in the reading room in the park. One quote from the book was still rattling around in my head – but I couldn’t remember it exactly and without the exact words couldn’t find it on the Internet. I wanted to use the quotation for a bit of writing/photography. The mystery quote was bothering me like an unscratched itch so I decided to ride back there and take another look at the book.

While I was there I bought a sushi roll from the Crazy Fish Truck (plus more cold water and a diet coke ). Then I was able to get a little green table in some dappled shade and sit down with the paintings and my food and hang.

Oh, I did misremember the quote a little bit. I am happy to set the record straight – but I’m thinking that my misremembered version might be… if not better, more useful for my purposes.