The telephone poles in your cozy little home neighborhood are festooned with flyers for garage sales, lost pets, and maybe a high school cheerleader car wash. 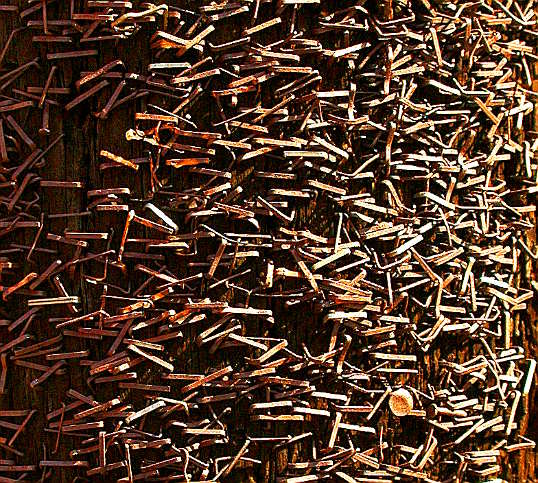 How long do they stay here? I guess pretty much forever. The real Renaissance of Deep Ellum happened in, say 1982 or so (when I moved to Dallas and started going down there to the Prophet Bar and Theater Gallery) so I suppose some of these are over thirty years old.

See that one staple a third of the way down? Yeah, that one. That’s from an old concert by MC900 Foot Jesus. Below it is one by Reverend Horton Heat. That old, rusty one at the bottom… New Bohemians (featuring Edie (Eatme) Brickell). There’s TimBuk3 and Mo Jo Nixon and True Believers. Don’t forget the Butthole Surfers with Grinding Teeth opening. The Loco Gringos left one behind. There’s one from The Blasters and another by Joe Christ and the Healing Faith. Of course there’s a shiny new one for Home by Hovercraft and a bunch of them from Brave Combo shows.

(yes, these are all shows that I have actually seen in Deep Ellum)

On and on. Think about it… every one of these staples (and the thousands you don’t see, they go all the way around, from knee high to ten feet in the air) represent a music show at a Deep Ellum Club sometime. That’s a lot of music. That’s a lot of memories. That’s a lot of steel hammered into creosote and pine.