From there, after six days and seven nights, you arrive at Zobeide, the white city, well exposed to the moon, with streets wound about themselves as in a skein. They tell this tale of its foundation: men of various nations had an identical dream. They saw a woman running at night through an unknown city; she was seen from behind, with long hair, and she was naked. They dreamed of pursuing her. As they twisted and turned, each of them lost her. After the dream, they set out in search of that city; they never found it, but they found one another; they decided to build a city like the one in the dream. In laying out the streets, each followed the course of his pursuit; at the spot where they had lost the fugitive’s trail, they arranged spaces and walls differently from the dream, so she would be unable to escape again.

This was the city of Zobeide, where they settled, waiting for that scene to be repeated one night. None of them, asleep or awake, ever saw the woman again. The city’s streets were streets where they went to work every day, with no link any more to the dreamed chase. Which, for that matter, had long been forgotten.

New men arrived from other lands, having had a dream like theirs, and in the city of Zobeide, they recognized something from the streets of the dream, and they changed the positions of arcades and stairways to resemble more closely the path of the pursued woman and so, at the spot where she had vanished, there would remain no avenue of escape.

The first to arrive could not understand what drew these people to Zobeide, this ugly city, this trap. 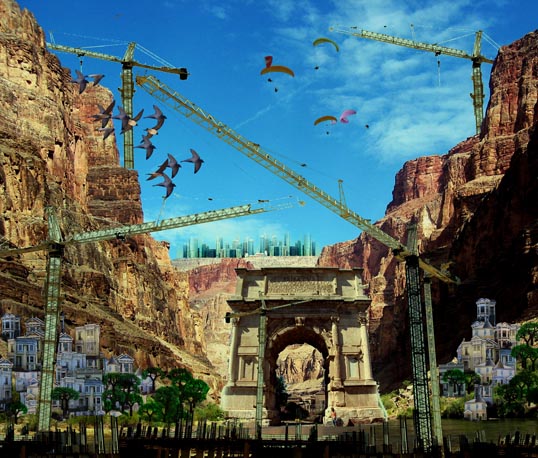 If you choose to believe me, good. Now I will tell how Octavia, the spider-web city, is made. There is a precipice between two steep mountains: the city is over the void, bound to the two crests with ropes and chains and catwalks. You walk on the little wooden ties, careful not to set your foot in the open spaces, or you cling to the hempen strands. Below there is nothing for hundreds and hundreds of feet: a few clouds glide past; farther down you can glimpse the chasm’s bed.

This is the foundation of the city: a net which serves as passage and as support. All the rest, instead of rising up, is hung below: rope ladders, hammocks, houses made like sacks, clothes hangers, terraces like gondolas, skins of water, gas jets, spits, baskets on strings, dumb-waiters, showers, trapezes and rings for children’s games, cable cars, chandeliers, pots with trailing plants.

Suspended over the abyss, the life of Octavia’s inhabitants is less uncertain than in other cities. They know the net will last only so long.

For a month, starting on June 1, I read a short story every day and wrote a journal entry about them. For me at least, (I don’t know about how it was for you) it was a fun, interesting, and educational experience and exercise. One thing I learned is how wide the world of short fiction is – how varied and variable, diverse and divisive the styles, techniques, and artistry.

So I vowed to continue reading widely… and that brought me to a book by Italo Calvino – Invisible Cities (PDF). Technically, it’s a novel – a short novel. However, it is made up of a long series of very short sketches, each one describing a different, fantastic city – fifty-five in total. These are framed by an outer story, where Marco Polo is talking to Kublai Khan and telling the tales, thereby describing the cities he has visited.

Kublai Khan does not necessarily believe everything Marco Polo says when he describes the cities visited on his expeditions, but the emperor of the Tartars does continue listening to the young Venetian with greater attention and curiosity than he shows any other messenger or explorer of his. In the lives of emperors there is a moment which follows pride in the boundless extension of the territories we have conquered, and the melancholy and relief of knowing we shall soon give up any thought of knowing and understanding them.
—-Invisible Cities, Italo Calvino

The descriptions can be read individually, in relation to each other, and to the deep philosophical questions raised by the framing story.

It is short and easy to read, yet complex – with hidden aspects and dimensions that have to be teased out. It is so full of unique and interesting ideas that it slowed my reading down… I’d devour a half page and then have to rest to let the concepts and thoughts born by the text stop vibrating and resonating inside my head, let it all calm down, before I could read some more.

The book shows a lot of influence of Jorge Luis Borges… and is one book that is referred to as Borgesian. It is full of self-referential conundrums, mysterious contradictions, and postmodern enigmas.

I have to be careful about what I am reading when I write, because my reading is such an influence on what I write. I put up an entry containing something I wrote, Free Breakfast, while reading Invisible Cities a few days ago.

I would love to write like Italo Calvino… though nobody would read it. His fiction is a lot of fun, but it isn’t, for example, something that will ever be as popular as, say Harry Potter.

Now that I think about it… wouldn’t that be cool? A postmodern, Borgesian Harry Potter.

It could explore the duality of Harry Potter’s life. He lives in a cupboard, ignored, miserable, and hopeless for part of the year, then spends the rest in a world of Magic… where he is the chosen one. Which life is the real one… which is the real Harry Potter? Could the dire tragic life of poor Orphan Harry be so demoralizing that it drives him crazy? – Is the whole magical world of Hogwarts born from Harry’s desperation – an imaginary world where he gains unthinkable power and importance – where he becomes the chosen warrior in a war against the ultimate evil?

And what about Voldemort? He shatters his soul into a handful of pieces and stores each one in a Horcrux. He achieves immortality, at the price of a broken soul. Do these items then become Voldemort? How can a soul exist without consciousness? The potential for paradox and existential exploration are endless.

Even something as simple as the paintings…. Dead people make an appearance in the moving, talking paintings of Hogwarts. Is this a form of limited immortality? Do the paintings know they are dead? Are they sad? Are there moving and talking paintings with subjects that were never alive? Why not? If so… what are their memories? Do the dead paintings sleep? Do they dream of the living?

That would be a book worth reading… if someone had the skill to pull it off.

In Olinda, if you go out with a magnifying glass and hunt carefully, you may find somewhere a point no bigger than the head of a pin which, if you look at it slightly enlarged, reveals within itself the roofs, the antennas, the skylights, the gardens, the pools, the streamers across the streets, the kiosks in the squares, the horse-racing track. That point does not remain there: a year later you will find it the size of half a lemon, then as large as a mushroom, then a soup plate. And then it becomes a full-size city, enclosed within the earlier city: a new city that forces its way ahead in the earlier city and presses its way toward the outside.

Olinda is certainly not the only city that grows in concentric circles, like tree trunks which each year add one more ring. But in other cities there remains, in the center, the old narrow girlde of the walls from which the withered spires rise, the towers, the tiled roofs, the domes, while the new quarters sprawl around them like a loosened belt. Not Olinda: the old walls expand bearing the old quarters with them, enlarged but maintaining their proportions an a broader horizon at the edges of the city; they surround the slightly newer quarters, which also grew up on the margins and became thinner to make room for still more recent ones pressing from inside; and so, on and on, to the heart of the city, a totally new Olinda which, in its reduced dimensions retains the features and the flow of lymph of the first Olinda and of all the Olindas that have blossomed one from the other; and within this innermost circle there are always blossoming–though it is hard to discern them–the next Olinda and those that will grow after it.