With cities, it is as with dreams: everything imaginable can be dreamed, but even the most unexpected dream is a rebus that conceals a desire or, its reverse, a fear. Cities, like dreams, are made of desires and fears, even if the thread of their discourse is secret, their rules are absurd, their perspectives deceitful, and everything conceals something else.

“I have neither desires nor fears,” the Khan declared, “and my dreams are composed either by my mind or by chance.”

“Cities also believe they are the work of the mind or of chance, but neither the one nor the other suffices to hold up their walls. You take delight not in a city’s seven or seventy wonders, but in the answer it gives to a question of yours.”

I have been putting up photographs I took a few weekends back at the Deep Ellum Art Park near Downtown Dallas. I have a lot more that I can use as I postprocess them to fill in journal entries on days that nothing much happens (or nothing that I want to write about here). The Deep Ellum Art Park is an area of concrete pillars of the overhead freeway connecting I30 and H75 (Central Expressway) plus a series of monoliths of various shapes that have been arranged in the gravelly areas between roadways for the purpose of serving as a canvas.

It’s a fun and interesting use of otherwise wasted space – a recovered area of urban blight.

It’s been growing over a period of decades and now has expanded to include decorative artworks in and around an urban garden and a dog park. It’s sort of officially authorized graffiti. I enjoy visiting the area, walking around looking at the graffiti/ paintings, and (obviously) taking photos of the scene.

One of the things I particularly enjoy is that I’ve been going down there for about twenty years now and it brings back memories. I remember sometime… maybe the early 90’s or so, that I did essentially what I’m doing now – I rode my bicycle (it would have been my Yokota Mountain bike – newly purchased – now converted into a commuter) down there and took some photographs.

That wasn’t really that long ago (in geologic time, for example), but times have changed so much. I would have been using my Pentax 35mm SLR so I would have been a lot more judicious about the number of shots – don’t want to waste film. Do you remember when you would say things like, “If the pictures come out” – “come out” was a common term back when you couldn’t look at the back of your camera and see what you had just shot?

….Or was it only ten years ago and I was using a primitive crude digital camera?
I don’t know which is true – I guess it doesn’t matter – thought it is pitiful and sad when your life stretches out into one featureless plain and one decade is indistinguishable from another.
Yet, a lot has changed.

But most of what has changed is me.

It was going down there and finding a few monoliths newly constructed and being painted for the first time. No more than a slim handful of them. Now there are over thirty, plus the hundred or so column sides. Each had an artist attached to it. Through lucky timing I had arrived during the inaugural event and the artists were at work.

I sat down on a bench to watch the painters paint (that’s another change – the benches are all gone – taken away because they attracted too many sleeping homeless people). There was an older man on a tall upright obelisk, a young man on a rectangular panel, and a young woman next to him on a semicircle jutting out of the earth.

I had so little confidence then – it was so very difficult to take pictures of people. Now, I would walk right up and ask them to pose with their work… they are painting a public monument after all – they would crave the publicity.

Watching the woman paint her bit of whitewashed concrete canvas I was filled with a hollow sense of longing and beauty. I don’t know why the scene of a woman and two men painting had this effect on me. The woman wasn’t especially attractive – and her painting, honestly, wasn’t particularly good. As a matter of fact, only the old man had a great amount of talent and skill – though I don’t remember what any of them actually painted. Their work is long gone now – painted over several times.

I dug around in my files and photographs and the only things I could find are these two small, blurry, edited shots I was using in some silly project. 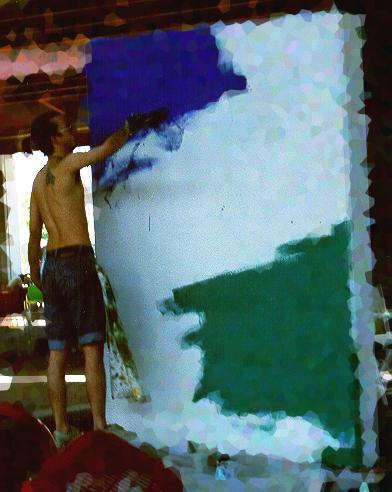 The only thing that remains, the only thing left, is my memory of sadness that I felt at the time. That is still vivid and clear… even as all the other details have faded into obscurity.

He was thinking of all these things when he desired a city. Isidora, therefore, is the city of his dreams: with one difference. The dreamed-of city contained him as a young man; he arrives at Isidora in his old age. In the square there is the wall where the old men sit and watch the young go by; he is seated in a row with them. Desires are already memories.
― Italo Calvino, Invisible Cities