I want a new bicycle but I simply can’t afford one. So I’m making do.

I’ve been riding my old Technium and it’s doing well. It’s a road bike and a lot of fun. Still, one of my long-term goals is to integrate biking with my daily life and I want a commuting/shopping/bombing around the neighborhood bike. I want a bike that can go anywhere, anytime – and I don’t really care how long it takes to get there.

So I’m rebuilding my old Yokota Yosemite steel mountain bike. I’ve scrounged up a set of fenders, front and back racks, and a cheap lighting system. I found bargains on new shifters, brake levers, and more modern V-brakes to replace the squealing cantilevers.

My old bike. I bought it for sixty bucks at a pawn shop over fifteen years ago.

Looking at the bike, though, I realized the paint was really messed up. It was white, and showed every scratch and scrape… and twenty years of tough riding left a lot of scratches and scrapes.

I decided to paint the thing. If nothing else, this gave me an excuse to remove every little piece and part. One of the few good things about doing your own maintenance is that it teaches you about your bike and gives you a connection – the inanimate, mechanical object of metal, plastic, and rubber – becomes almost a living thing in your mind, and extension of your own body, so to speak.

The only problem is that stripping all the paint off the old steel frame was a ton of work. Paint stripper, flat bladed scrapers, and sandpaper… combined with helpings of time and elbow grease took the thing down to stripped bare steel. I don’t know what kind of paint they used, but it was tough.

I have become enamored of steel framed bikes. Nowadays, of course, it’s all aluminum and/or carbon fiber. Anything to shave off a few more ounces.

But now that I see the gleaming steel that was under that paint – I’ll take the toughness, versatility, and smooth ride of that steel even if I have to push around a couple more pounds.

I never noticed the Yosemite engraved on the seat tube until I removed the old paint. 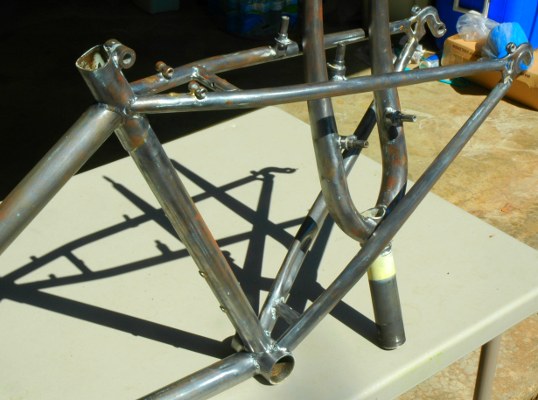 A lot of tubes, a lot of paint to scrape off. 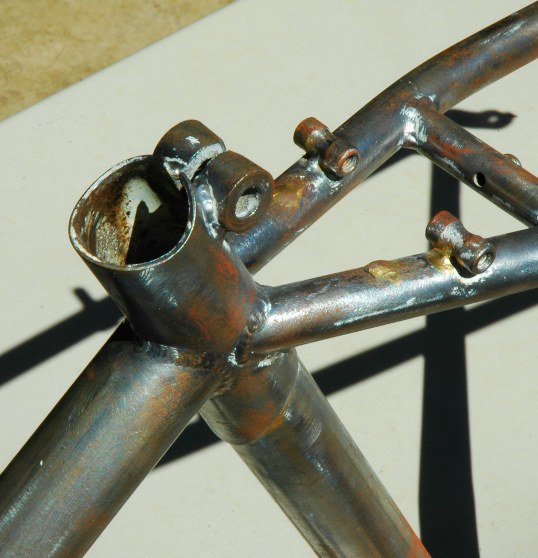 The bare steel flash rusts almost immediately without any paint protecting it. I’ll have to give it a final sanding right before I prime it.

Now I’m ready. We have this little plastic outbuilding that I need to clean out and convert into a temporary paint booth. I’ll have to slot out the time and I’ll need a final sanding to clean the flash rust off the frame; then it’s primer-color-clear.

I thought about colors – I want something really simple that won’t show dirt. It looks like it’ll be Charleston Green. – which is almost black, but is supposed to show a green tint when the sun hits it right. That’s darker than I was thinking originally (I was looking for a dark British Racing Green) but the more I thought about it, and the more I read about the history of the color, Charleston Green it is.

5 responses to “Stripped to Bare Steel”