“There is something strange about agony; the memory of it can be terribly short-lived when the contrast of revival and a pretty spring afternoon have dispelled the regrets. One drink of vodka in a cheerful glass, in the company of good poetry and the scent of blossoms and earth might entice the most well intended to forgo promise of atonement until a worse time. I have at times been just less than amazed how one drink merges with the second, where at some unknown point a mental transformation sets in. I have never been able to ascertain at what point that is–not precisely–and I have been conscious of trying to catch that moment, to try and understand it, to try and prevent it from happening, or at least have a fair chance to decide whether or not to cross over into that other realm. Such an elusive thing, this is.”
― Ronald Everett Capps, Off Magazine Street

When you talk to someone that has visited New Orleans, they will tend to say, “Yeah, I’ve been there, I walked up and down Bourbon Street.” On our last trip, we spent a week in New Orleans and I never set foot on Bourbon. It’s all tourist, all the time, in a bad way. Trash tourist.

There is another street that has plenty of tourist in it, but in a good way. Magazine Street. I spent a lot of time on Magazine. Our Guest House was at Magazine and Race, not far out from downtown. But Magazine runs a long way. Decatur street in the French Quarter changes into Magazine as it crosses the neutral ground of Canal and then Magazine follows the curve of the river all the way through the Arts District, Garden District and Uptown until it pierces the gorgeous Audubon Park.

At every major cross street it holds a cluster of restaurants, nightclubs, shops, and everything else. In between are fabulous examples of the amazing New Orleans architecture, from Gothic old mansions to rows of shotgun houses.

A walk down Magazine is a great walk. Be careful, though – it is a long street. I still have memories and pains in my ankles from a stroll we took a couple years ago. Near the beginning, I turned an ankle on a bit of rough sidewalk broken pavement and then hiked too far from the car. The trip back will forever be etched in my mind as the “Magazine Street Death March.” 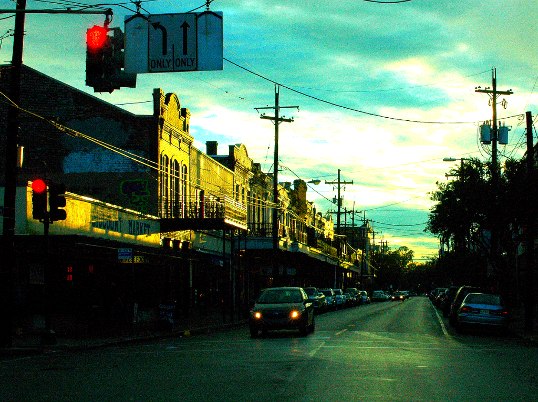 I saw a bit on television about the uselessness of a college education. The reporter wandered New Orleans interviewing bouncers, bartenders, cooks, and pedicab drivers – even a woman reading tarot cards in Jackson Square. They all had college degrees – some multiple, many graduate degrees – yet they all were working in nightlife in New Orleans. The point of the piece was how useless the college was to these poor dupes – that in spite of their education, the best they could do was work in the New Orleans nightlife.

The main thrust of the concept may be true, but the reporter was missing the whole point. The folks he interviewed were doing what they wanted to do – not a single one of them expressed regret. They didn’t want to be investment bankers, teachers, or engineers; they wanted to be a part of New Orleans, as best as they could.

I guarantee that if you interview a pack of bankers, managers, and businessmen and ask them, if they could, would they want to drive a pedicab through the New Orleans night, tell fortunes under the Cathedral in Jackson Square, or hustle for the strippers on Bourbon, and they probably won’t tell you that they would d’ruther, but there will be a long pause and a wistful look into the air. It’s all a question of who has the courage and who doesn’t.

“there was something about
that city, though
it didn’t let me feel guilty
that I had no feeling for the
things so many others
needed.
it let me alone.”
― Charles Bukowski

“There are only two things: love, all sorts of love, with pretty girls, and the music of New Orleans or Duke Ellington. Everything else ought to go, because everything else is ugly. ”
― Boris Vian

“I’m not going to lay down in words the lure of this place. Every great writer in the land, from Faulkner to Twain to Rice to Ford, has tried to do it and fallen short. It is impossible to capture the essence, tolerance, and spirit of south Louisiana in words and to try is to roll down a road of clichés, bouncing over beignets and beads and brass bands and it just is what it is.

“People don’t live in New Orleans because it is easy. They live here because they are incapable of living anywhere else in the just same way.”
― Ian McNulty, A Season of Night: New Orleans Life After Katrina