I was checking my facebook ticker when I came across this event. It kept showing up posted by various local organizations from The Dallas Arts District to Bike Friendly Richardson. The event was A Bike Crawl through the Arts District on Thursday, hosted by Biking in Dallas. I was off work for the whole time between Christmas and New Year, so I had no excuse not to go.

Let’s see, Dallas Arts District, check… bicycles, check…, Crow Collection museum of Asian Art, check… taking photographs, check… and food trucks, check, check and check. There was absolutely no reason for me not to go. You could not design an event that had more stuff in it that I was interested in.

But I felt anxious. I’m in terrible shape and, even though we would not be riding very far or in any sort of difficult terrain, there would be some talented and experienced bicyclists there and I felt really nervous. I used to be a good bicycle rider, but that was many years ago and it will probably take me a year to get back into anything close to riding condition, shape, and ability.

So I had mixed feelings. Then I realized that what I was feeling wasn’t fear, it was Resistance.

So I went, and I had a great time. I thought about taking the Dart Train but ended up driving and took about twenty minutes trying to fold three dollar bills up into small enough packets to fit through the tiny slot in the parking lot thing. I packed all sorts of warm clothing but the killer Texas sun had everything so warmed up that I ended up in a T-shirt.

Everyone met down at the fountain on the end of Flora street by the museum of art. We didn’t really do a lot of bicycle riding – the Arts District is only seven block long after all. We walked through the Crow Collection – I’ve been there quite a bit lately and had sat through the entire animated film by Qiu AnXiong – but you always find something new in a museum. After that is was on to the food trucks. There were four: Gandolfo’s, Ssahm, The Butcher’s Son, and at the end, Easy Slider – a new truck. When given a choice, I always like to try the truck I’ve never tried before – so I bought some tiny hamburgers and they were very good.

Then we rode down to the end – my bike slipped a gear going up a driveway – a nasty clunk! and my pedals spun, I think I need a new chain. The dark, raked gravel from the Transcendence art installation across from the Wyly theater was still there – now all fenced in (the ice was long melted, of course).

Then we stopped at the Opera House to take some pictures, rode around a bit, and stopped off at The Nasher for a look at the sculptures. I’m always up for a trip to the Nasher.

So I had a good time, great people, and it was fun to get out. I have got to work hard on my cycling and my fitness – there is so much to do with a pedal, chain, and two wheels. I remember when it was easy.

A few more photos from the crawl on my Facebook Album 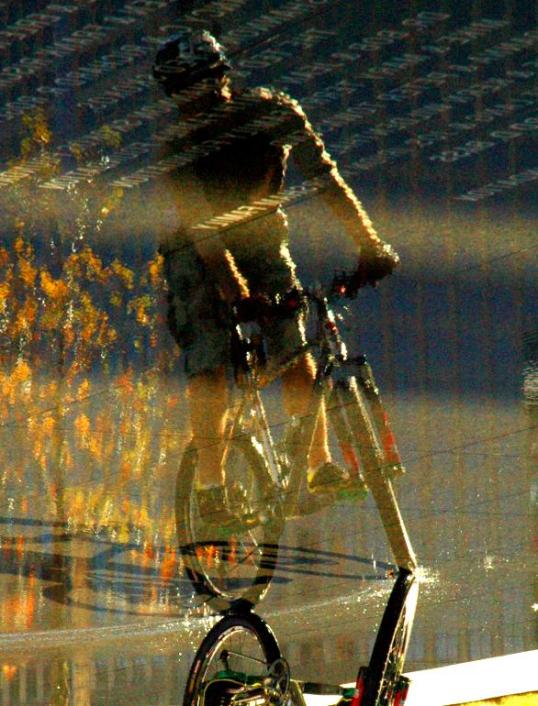 Bike rider in front of the Winspear Opera House. If you are wondering, the photo is cropped and upside down.

Snuff bottle from the Crow Collection 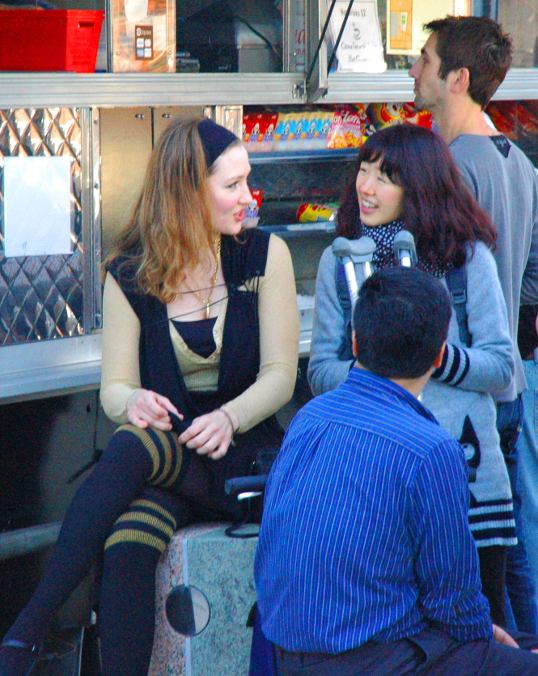 A bike rider in front of the Winspear Opera House 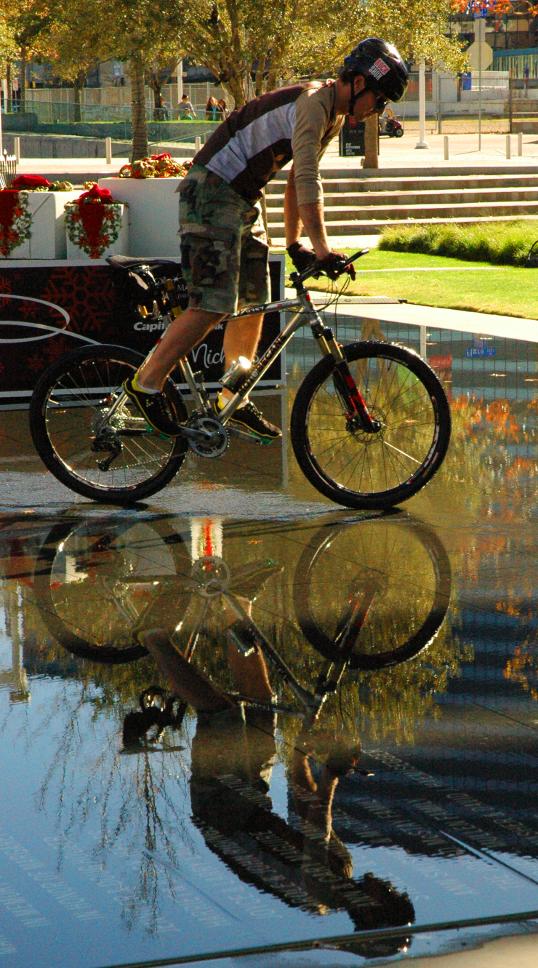 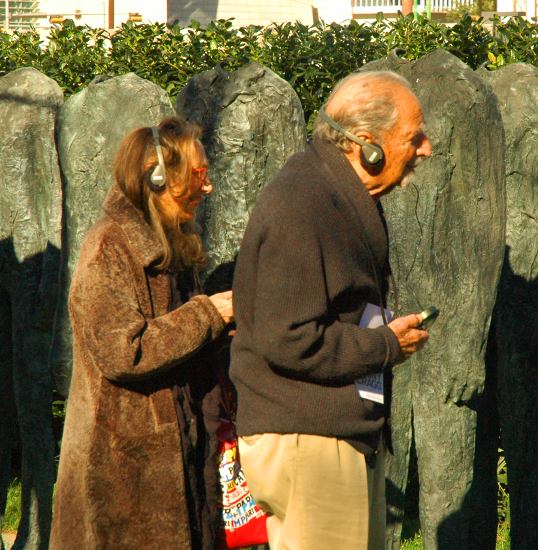 An elderly couple at the Nasher Museum.

These two were very interested in the “Bronze Crowd” by Magdalena Abakanowicz. From the Nasher Web Site:

As a child in Poland during World War II, Magdalena Abakanowicz lived through the German and Soviet invasions, experiencing firsthand the horrors perpetrated by dehumanized masses under the sway of evil leadership. Frequently addressing the theme of the crowd in her sculpture, she has said “A crowd is the most cruel because it begins to act like a brainless organism.” From a distance, the thirty six over-life-size figures of Bronze Crowd look identical, but a closer view reveals their individuality. The spaces between figures become as important to the overall composition as the figures themselves. Viewers can walk between and among the figures, penetrating the imposing solidarity of the group and, simultaneously, stepping into the profoundly solitary experience of being alone in a crowd.

Since this work is widely associated with the Holocaust – whenever I see an elderly couple looking at it I wonder if they could be survivors. At any rate, I would love to hear their story. 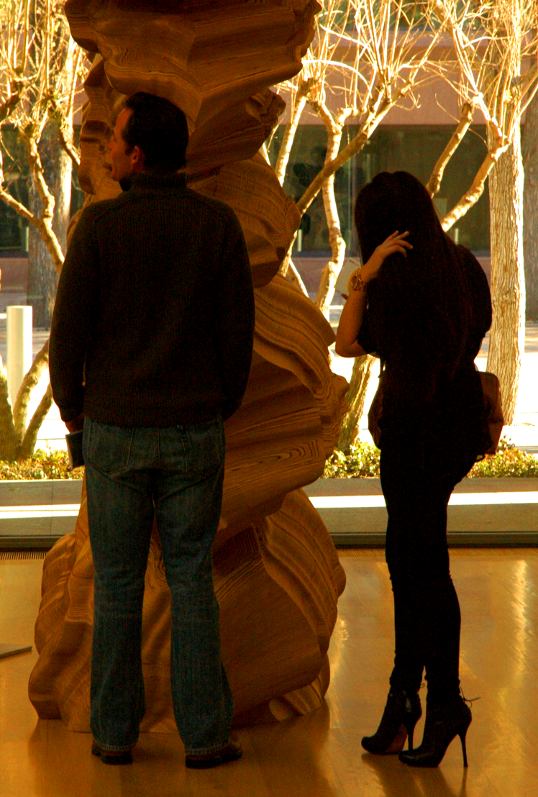 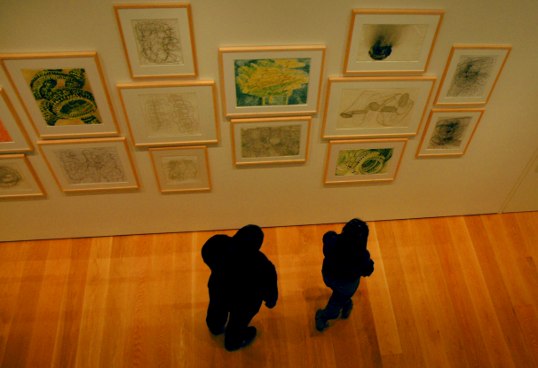 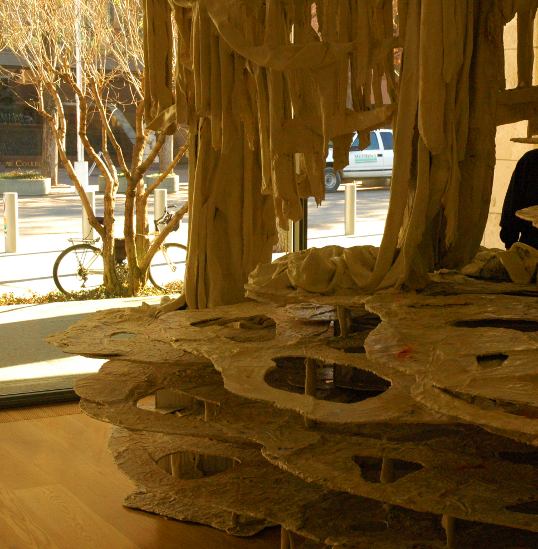 At the Nasher. The sculpture is "Gradiva's Fourth Wall" by Diana Al-Hadid. Yes, that is my bicycle locked up to a tree outside. 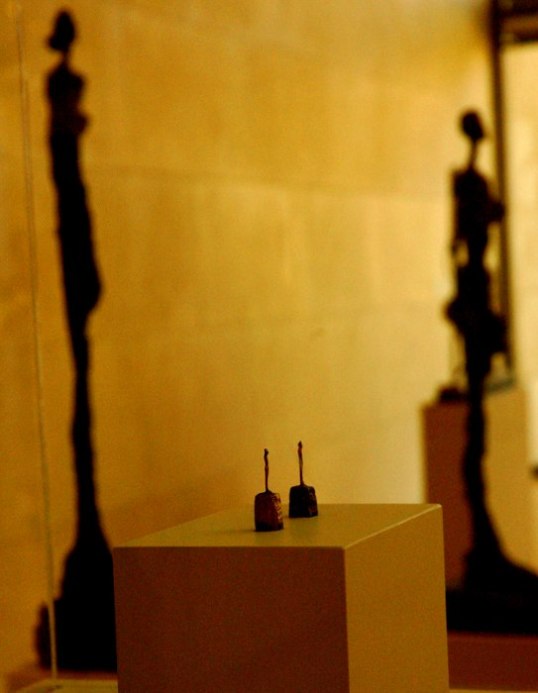 Alberto Giacometti, some large sculptures and some tiny ones.