This is how they meet. One night Slothrop is out raiding a vegetable
garden in the park. Thousands of people living in the open. He skirts
their fires, stealthy. All he wants is a handful of greens here, a carrot
or mangel-wurzel there, just to keep him going. When they see him they
throw rocks, lumber, once not long ago an old hand-grenade that didn’t
go off but made him shit where he stood.

I have been trying hard to watch what I eat recently… and doing a fairly good job of it. But we live in a world of temptation and I saw publicity for a second Food Truck Festival down in Deep Ellum last Friday. The last one was a big success and Deep Ellum is such a great place for people watching at things like that. I could not resist. So I decided to take the DART train down after work and then simply watch what I ate.

Oh, in checking this out, I came across a bit of interesting information. If memory serves, they said a little over a year ago there were two gourmet food trucks in the Dallas Fort Worth Metroplex. Now there are somewhere around sixty four.

Luckily for me, this festival had a number of healthy options. As is my wont, I chose a truck that I had never tried before. The Good Karma Kitchen truck was in attendance. I don’t think I had even seen this one before – they seem to spend most of their time in Fort Worth. They make gluten-free vegetarian food.

Do you think that sounds good? If you do, you are right. 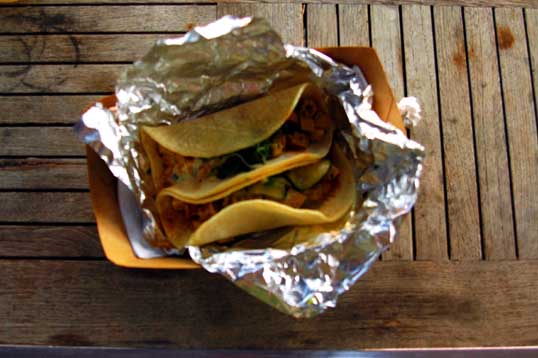 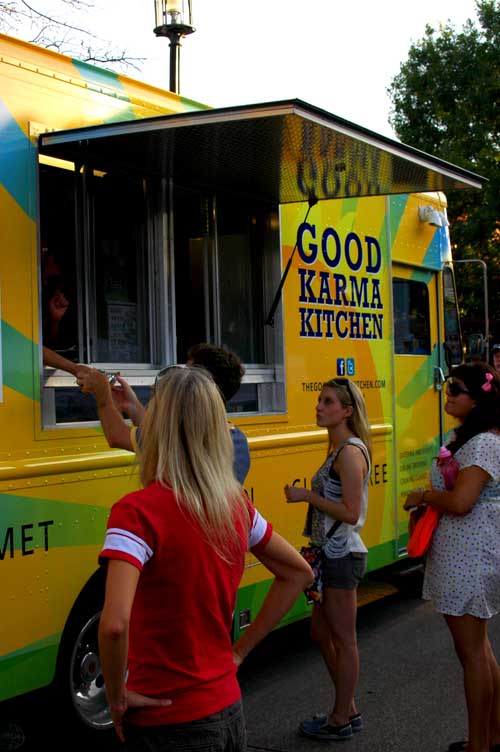 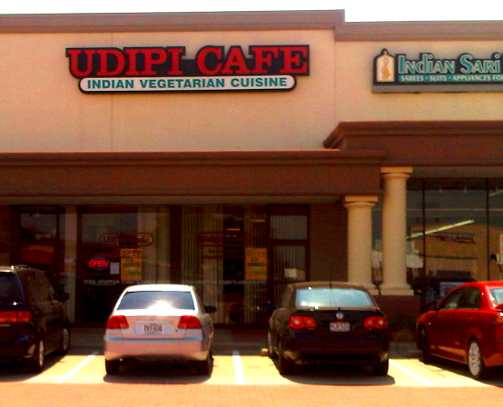 Last weekend I enjoyed trying out the lunch buffets at the bookended Asian vegetarian restaurants in my neighborhood, Suma Veggie Cafe, and the Veggie Garden. I’m compiling a list of family-owned restaurants near my home and the countries and cultures their cuisines represent – it’s a daunting task. I wanted to keep this going this weekend.

A friend suggested, “You might also try the vegetarian Indian restaurant a couple doors down from Party City at 75 and Beltline.” She was referring to the Udipi Cafe, one of several Indian restaurants in the newly remodeled Richardson Heights Shopping Center. Today, at lunch, I decided to give it a try.

Like so many small family-owned spots, it is small and unassuming, but clean and cheerful. The place was full, mostly with families, with a few couples and a couple big tables of young people.

I know very little… nothing really about Indian Food in general. The Udipi Cafe is advertised as “Note that Udipi offers SOUTH Indian cuisine which is different from the commonly found North Indian cuisine.” – which means I know less than nothing. It’s vegetarian South Indian cuisine, which adds another layer of mystery for me.

The buffet was labeled, which didn’t help at all – except I love the look of the words – Poori, Aloo Paratha, Udipi Iddly, Moong Dosai, Uthappam, Aloo Gobi… How can anything with names this cool not be delicious?

At the buffet, I was confused. There were regular plates in a pile, but most folks were eating from these big shiny metal cafeteria style plates with raised areas for different foods. Also, there were all these little metal cups. What do I put in the cup? What is permissible to mix together? What do I keep separate in the areas of the plate? What is OK to soak up with the bread?

I made the mistake of sitting with my back to the buffet. It was nice to watch the big family groups and the young people (I wondered if any of them new Nick or Lee), but in a new place like this, it’s usually a good idea to watch the experts getting their food – learn how it’s done.

All good, though. I just piled it all up and it was all delicious. The Indian spices were more complex than some I’ve had and I really liked it. I especially enjoyed the curried chick peas – Chana Masala (I think), the Jackfruit Curry (I looked at the generous chunk of Jackfruit on my fork, thought about whether caution should be in order, and decided to simply plunge on in), and some sort of a a spicy pineapple something.

They brought a plate of Dosa to my table. These are crepes – mine were probably Masala Dosa – filled with potatoes and onions. Really good but really filling.

It was fun, it was good… I want to go back, but my list of places to go is growing faster than I can cross them off.

The other day I went out to eat at the Suma Veggie Cafe near my house.

While I was checking on the web I found a web page for the Veggie Garden – another similar restaurant on Arapaho Road – the same street as the Veggie Cafe. This one is only about a mile to the west. As a matter of fact, for most of the day I thought they were the same restaurant. Luckily, they have pretty much the same hours, menu, and prices, so I was still good to go.

When I first wrote my blog entry, I actually called it Veggie Garden, and it wasn’t until I posted the picture of the place that I realized my mistake. Search and replace is your friend.

Today(Sunday) I had an hour or so before the library opened so I decided to try out the other Vegetarian option.

Veggie Garden is located in another rundown strip on Arapaho road, just west of Highway 75 and the Richardson Library and City Government complex. Araphaho makes an irregular jog to the north at that point and the area is crowded with inexpensive strips that have attracted a number of diverse businesses. The economy has cut through these like a scythe, but there are a few still open. I’ve been to the Salvadorian Pupuseria, but there is a well-known Brazilian restaurant hiding out, along with I Gemelli Italian Ristorante, Olive Lebanese Fusion, Mexican (with the interesting name “Holy Frijoles”), Kasra Persian, and the Peace Pipe Hookah Lounge, with the interesting looking “House of Poets” next door (that is a place I have to check out). In a more ordinary vein, there is an excellent burger place plus the usual bunch of fast-food choices and auto-parts stores. There’s even a car wash called the “Rubber Ducky,” a coin shop, and an inline Hockey Arena.

This is what I found in one drive-through. Obviously, this is an area worth a little more exploration. I think I need to have a plan and write about it. Stick around. 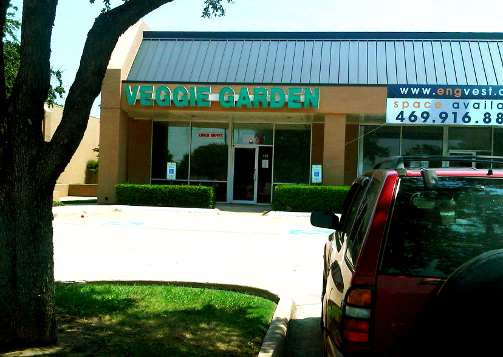 Veggie Garden. The parking lot is full of a lot of very aggressive sounding parking signs.

Not surprisingly, it was very similar to the Veggie Cafe. A small buffet offering Vegetarian versions of standard Asian dishes. This one was a little more intent on duplicating the taste of meat dishes – for example some of the dishes were labeled as “chicken” or “beef” though they were made of tofu or other soy.

I like it, the service was friendly and very good (no table piled with papers, no grumpy owner). I guess, to sum up:

Are two choices better than one? Why eat meat again?