“Whoever fights monsters should see to it that in the process he does not become a monster. And if you gaze long enough into an abyss, the abyss will gaze back into you.”
― Friedrich Nietzsche

Something
In front of
Braindead Brewing
Deep Ellum
Dallas, Texas

“Oh it was gorgeousness and gorgeosity made flesh. The trombones crunched redgold under my bed, and behind my gulliver the trumpets three-wise silverflamed, and there by the door the timps rolling through my guts and out again crunched like candy thunder. Oh, it was wonder of wonders.”
― Anthony Burgess, A Clockwork Orange

When looking at street art – murals especially – there is a thin line between art and graffiti and advertisement.

For example, this one – is obviously an advertisement for the band The Orange and their new album, Sharing Vitamins.

But it’s still cool – first, because it is cool. Second, because it is actually painted by the leader of the group, Scott Tucker, and he is a second generation professional mural painter, as well as a musician.

It doesn’t get an better than that… now does it my droogs.

Rodeo clown vibrations are crackin’ the skulls of false gods.
—-written in blue Sharpie on the side of an abandoned computer monitor

I am, of course, a fan of street art – the odder the better – and of guerrilla publishing. In my wanderings around town, I once stumbled across an interesting piece of text plastered up on a wall in Deep Ellum – Text on the Streets.

Then, over a year later, I found the same work stuck in a bottle on a park table in Oak Cliff – Message in a Bottle – Shazam!

Message in a Bottle

I have wondered about the artist – and wasn’t able to find out much. Some other folks were looking too, and I found a few examples of his work photographed and posted on the internet.
Here
Here
Here
Here

Then, this weekend, another year later, I found more of the artist’s work in Deep Ellum.

First, I stumbled across a pink decorated metal box on an out-of-the-way stoop. 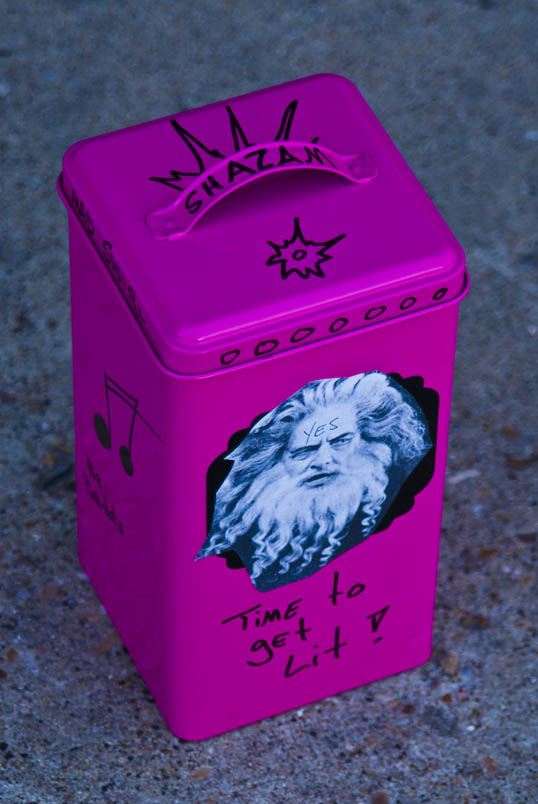 Inside the box was a Xeroxed art work, with writing on the reverse.

Fantastic Cosmic Kismet Vibrations are flowing to you and through you NOW!

Obviously the same person. Walking onward, I found that he had kicked his stuff up a notch. In front of Braindead Brewing I found an old decorated computer monitor. It is good to see that in the last few years he has learned how to spell Hootenanny.

The Universal Flow has led you to this exact moment in time and space.

Really cool stuff. I bow down.

Oh, and by the way, on the piece of paper found in the box, I discovered a clue that led me to find the artist… they even have a Facebook Page.

So who is it? I don’t think I’ll let on. Find it yourself. The clues are there.

I was a really lousy artist as a kid. Too abstract expressionist; or I’d draw a big ram’s head, really messy. I’d never win painting contests. I remember losing to a guy who did a perfect Spiderman.
—-Jean-Michel Basquiat

This last weekend, I dragged myself out of bed… if not exactly very early, then rather earlier than later. I thought of what I needed to do with the rapidly slipping away day and I thought, “I need some miles and some photos.”

So I packed my camera into a handlebar bag and rode to the DART station – intending on taking the next train that pulled in, no matter which direction it was going. The Red Line came first, going south, so I headed downtown.

The day was warming quickly and I didn’t feel very good – so I wasn’t going to be able to get as many miles as I wanted. I rode to Klyde Warren Park and picked up something to eat from a Food Truck, read a book, and rested for a bit. Then I headed to Deep Ellum to see what I could see.

Sometimes, it’s important to be able to trust fate, to follow your nose and see where you end up.

As I crossed Ross I saw someone up on a ladder spray painting a mural on the back wall of a building. I’m a big fan of urban murals but have rarely been able to see one actually being made. The artist was working off a photoshopped photo of the site with the design, taped to the wall. I parked my bike and dug out my camera.

The mural was being painted by an artist from Denton, Eric Mancini. He said he was Velcro-ing some artworks to the building when the owner came out and told him he had been thinking about placing a mural there. Eric was glad to comply.

The mural was a stylized Technicolor portrait of Jean-Michel Basquiat. “You can tell by the hair,” Mancini said.

We chatted a bit about art, about Denton (“Denton has become what Austin thinks it is” – one of my favorite sayings), this and that. “I’ll finish this later today and then do one of my tree paintings on the rest of the wall,” he said. He needed to get painting and I needed to get some more miles so I packed up and rode off – he climbed back up his ladder.

Now, this weekend I’ll go back and take some photos of the finished work. More photos, more miles. 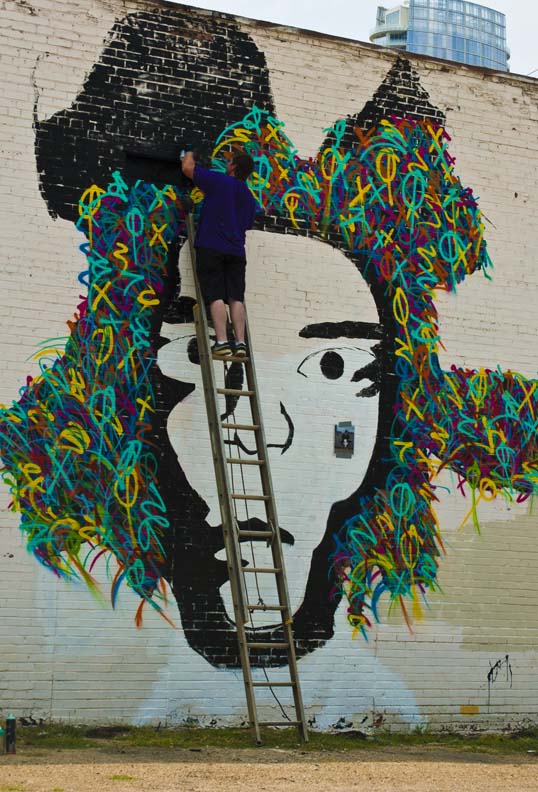 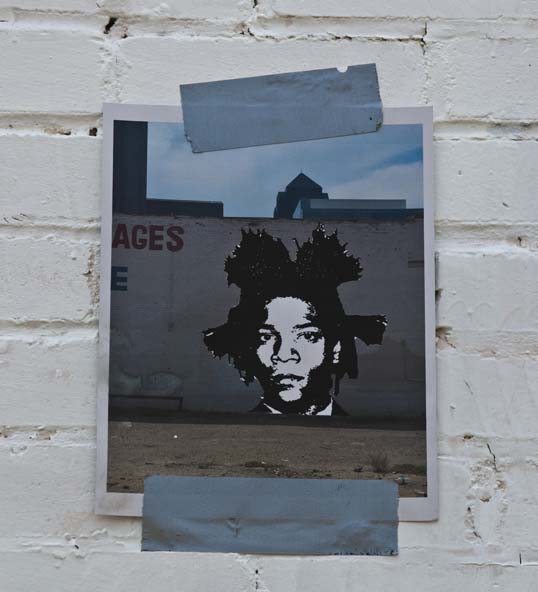 “Graffiti is one of the few tools you have if you have almost nothing. And even if you don’t come up with a picture to cure world poverty you can make someone smile while they’re having a piss.”
― Banksy, Banging Your Head Against a Brick Wall

“I used to think it was possible for an artist to alter the inner life of the culture. Now bomb-makers and gunmen have taken that territory.”
― Don DeLillo, Mao II

“I mean, they say you die twice. One time when you stop breathing and a second time, a bit later on, when somebody says your name for the last time.”
― Banksy

“Once upon a time, there was a king who ruled a great and glorious nation. Favourite amongst his subjects was the court painter of whom he was very proud. Everybody agreed this wizzened old man pianted the greatest pictures in the whole kingdom and the king would spend hours each day gazing at them in wonder. However, one day a dirty and dishevelled stranger presented himself at the court claiming that in fact he was the greatest painter in the land. The indignant king decreed a competition would be held between the two artists, confident it would teach the vagabond an embarrassing lesson. Within a month they were both to produce a masterpiece that would out do the other. After thirty days of working feverishly day and night, both artists were ready. They placed their paintings, each hidden by a cloth, on easels in the great hall of the castle. As a large crowd gathered, the king ordered the cloth be pulled first from the court artist’s easel. Everyone gasped as before them was revealed a wonderful oil painting of a table set with a feast. At its centre was an ornate bowl full of exotic fruits glistening moistly in the dawn light. As the crowd gazed admiringly, a sparrow perched high up on the rafters of the hall swooped down and hungrily tried to snatch one of the grapes from the painted bowl only to hit the canvas and fall down dead with shock at the feet of the king. ’Aha!’ exclaimed the king. ’My artist has produced a painting so wonderful it has fooled nature herself, surely you must agree that he is the greatest painter who ever lived!’ But the vagabond said nothing and stared solemnly at his feet. ’Now, pull the blanket from your painting and let us see what you have for us,’ cried the king. But the tramp remained motionless and said nothing. Growing impatient, the king stepped forward and reached out to grab the blanket only to freeze in horror at the last moment. ’You see,’ said the tramp quietly, ’there is no blanket covering the painting. This is actually just a painting of a cloth covering a painting. And whereas your famous artist is content to fool nature, I’ve made the king of the whole country look like a clueless little twat.”
― Banksy, Wall and Piece

“The early bird gets the worm, but the second mouse gets the cheese.”
― Willie Nelson

It is late in the day – later than I thought – too late… though I have no idea what it is too late for. I am on my bicycle and worn out – long since dropped down into my emergency gear so I can get home alive. Everyone else has given up and I should be waiting on my train, but I am anxious and can’t help finding some murals and taking some pictures.

Close to our bows, strange forms in the water darted hither and thither before us; while thick in our rear flew the inscrutable sea-ravens. And every morning, perched on our stays, rows of these birds were seen; and spite of our hootings, for a long time obstinately clung to the hemp, as though they deemed our ship some drifting, uninhabited craft; a thing appointed to desolation, and therefore fit roosting-place for their homeless selves. And heaved and heaved, still unrestingly heaved the black sea, as if its vast tides were a conscience; and the great mundane soul were in anguish and remorse for the long sin and suffering it had bred.
—-Moby Dick 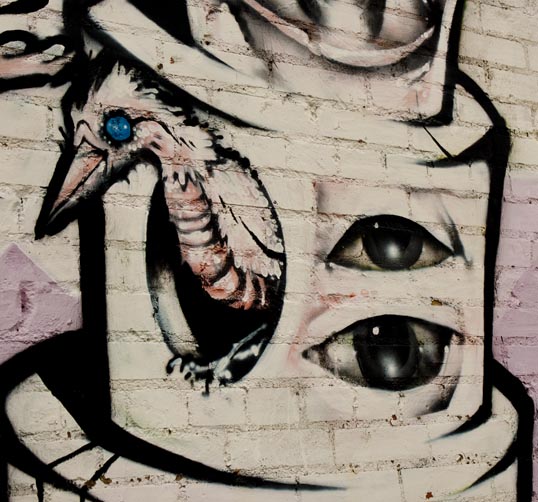 The reality is in this head. Mine. I’m the projector at the planetarium, all the closed little universe visible in the circle of that stage is coming out of my mouth, eyes, and sometimes other orifices also.
–Thomas Pynchon, The Crying of Lot 49

“In their faces–plenty of them were handsome, but ruined–I’ve seen the remnants of who they almost succeeded in being but failed to be, before becoming themselves.”
― Richard Ford, Canada 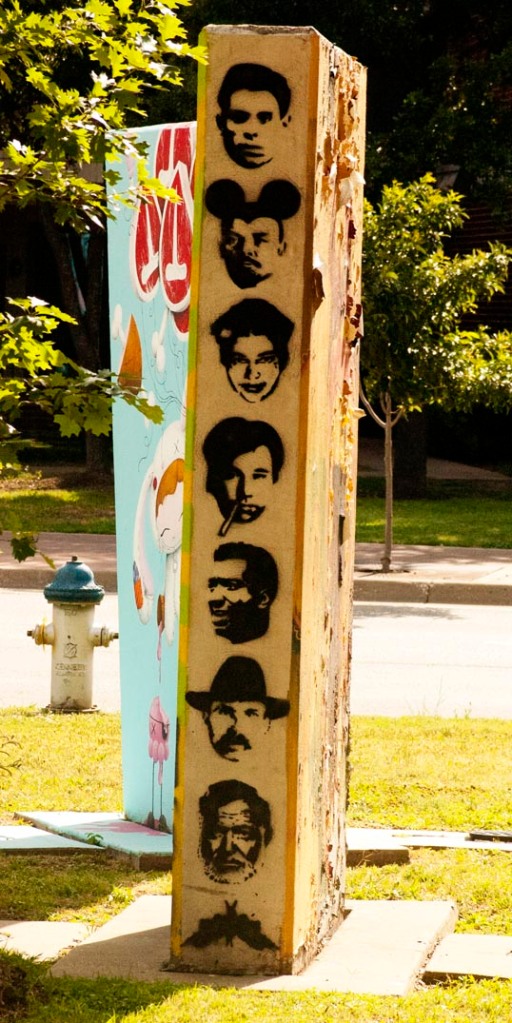 “Limitless undying love which shines around me like a million suns it calls me on and on across the universe.”
― John Lennon 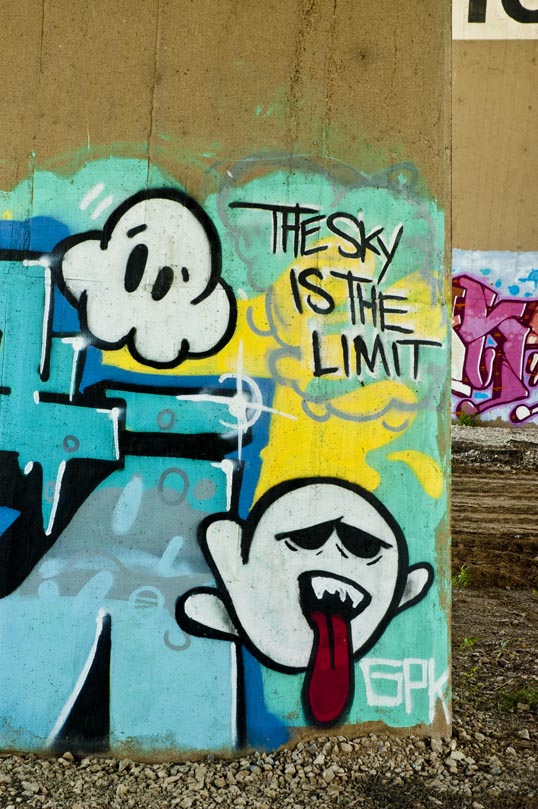